Chris Palmer    A couple weeks ago I posted an article about a Sci-Fi terrain piece I made from a sand mold that I purchased at the local Dollar Tree.   One of my readers, Marc, in the Comments section of that post, said that he was going to use the pyramid from the same “landmarks” mold series to make a Frostgrave mausoleum.  I thought that was a great idea, so picked one up myself to make my own mausoleum.

I began by cutting a simple doorway piece from some scrap pink insulation foam, and scribed some doors and cut stones on it. I then used hot glue to glue it to one of the sides. I also glued a small decorative bits piece over the doors (Not shown in this photo) 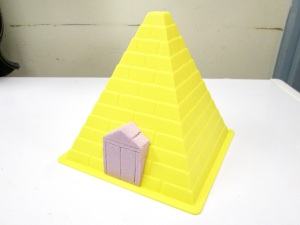 I pre-painted the doorway piece with black acrylic paint (so it wouldn’t melt when sprayed), then sprayed the whole thing with black spray paint.

I then did a couple layers of grey drybrushed on the pyramid, and then painted the piece over the doors as verdigris bronze.

I’m really happy how this turned out!   I had originally dismissed the Pyramid sand mold since I have a perfectly good desert-colored pyramid already.  I never thought of doing one for a colder climate (that is, grey stone), so thank Marc for his idea!

via One More Gaming Project http://onemoregamingproject.blogspot.com/2017/07/dollar-tree-sand-mold-frostgrave.html
from Tumblr http://tumblr.hawks-club.org/post/162560500003
via IFTTT