I mentioned in my previous post that it has been a hectic time at work.  We finally ran the week-long exercise I’d been preparing last week, so I reached the weekend tired but calm.

I ended up taking up my brush and finishing two figures from my deep backlog:

I checked my painting records, and it would appear that the last time I finished anything for this project was in 2012.  The last game to be put on the table was in 2014, at Historicon. 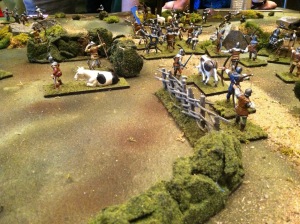 The Historical games that year involved three narratively linked scenarios, starting with the one pictured above, about raiding for provisions.
I was considering the possibility of running Medieval Mayhem at Gencon next year.  The transport is right, albeit somewhat bulky, but would be reasonable if we chose to drive, and if the hotel situation allowed for hauling things to the table.
Anyway, with those guys done, it should be back to 25mm Dux Bellorum figures next…

via The Sharp End of the Brush http://sharpbrush.blogspot.com/2017/09/the-calm-after-storm-some-painting.html

0 thoughts on “The calm after the storm: Some painting”