This past week I painted two of the Fly Demons from the Bones 2 Lesser Demons set, as part of my effort to start assembling the creatures I will need for next year’s Ghost Archipelago Campaign.  The rules’ creature list calls for a couple of Giant Wasps; but not having any giant wasp figures on hand, I figure the Bones Fly Demons I had would fit the bill well enough if I painted them as Giant Bees.
I prepped these figures in the usual way; soaking them in a dish of water with a couple drops of dish-soap added, then giving them a light scrub with a soft toothbrush, and then rinsing and drying them.   I then did the conversion work, and then glued the figures to black-primed 1" fender washers with Aleene’s Tacky glue, and then glued the washer-mounted figures to a tongue depressor with a couple drops of the Elmer’s glue under each washer. 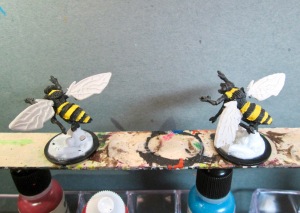 Next, I painted the wings with Americana “Dove Grey”.  Then after everything had a while to dry, I gave their wings and the yellow stripes a wash with some thinned Winsor-Newton “Chestnut Brown” ink.  When the wash was dry,  I painted the top spine of each wing with Black and then painted the veins within each wing using some Accent “Real Umber mixed with Black.

I then painted the center of each wing panel with the"Dove Grey”, and did highlights on the mouth and tongue(?) with Crafter’s Acrylic “Storm Cloud Grey”.  Next, I repainted the eyes with Black to remove any drybrushing that got on them.   After that, I drybrushed the yellow abdomen stripes with some Crafter’s Acrylic “Daffodil Yellow”, and lastly I did some White highlight dots in the eyes.. 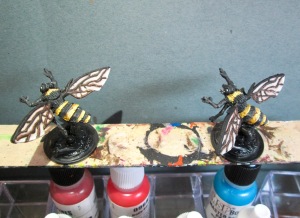 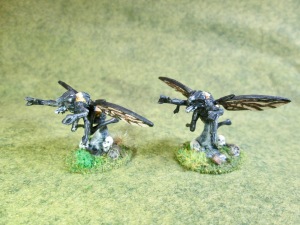 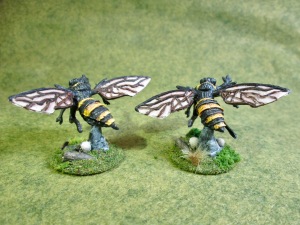 I’m generally happy with how these turned out.  I think they made the conversion to giant bees pretty well.

via All Bones About It http://allbonesabout.blogspot.com/2017/10/fly-demons-painted-as-giant-bees-bones.html
from Tumblr http://tumblr.hawks-club.org/post/166465010413
via IFTTT