Chris Palmer     When this time of year rolls around, I always wished I had worked more on the Christmas themed figures I have collected over the years.   So, over the last few weeks, with my seasonal mood increasing, I decided to finish up a few of them.
First I completed Reaper’s “Pack Reindeer”, which has been sitting half done on my painting desk since I got him last December. 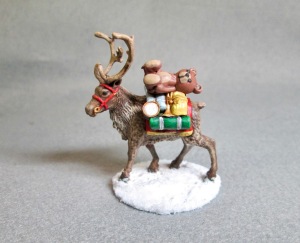 I then painted Coppestone’s “Lovely Assistant”. This figure comes in a blister with a Santa Claus figure, which I’ve put on a washer and primed, but haven’t gotten to yet. 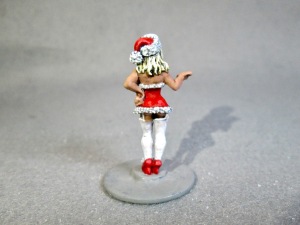 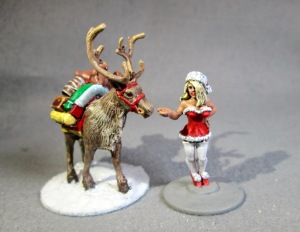 Lastly, I just finished Reapers “Santa’s Helpers”; a three pack of mechanical robot ornaments.    I tried an experiment with these; painting them first with special Chrome spray paint, and then using Citadel gemstone transparent paints on them: Spiritstone Red, Soulstone Blue, and Waystone Green, in an attempt to given them that lacquered mirror look that real ornaments have.  When finished, I sprayed them with Testor’s Dullcote to give them a protective coat, and then went over them again with a brush-on glossy varnish to give them that glass ornament shine.   I’m rather plesed with how they came out. 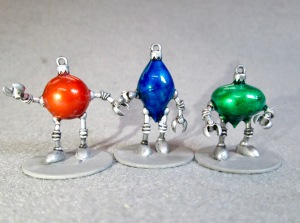 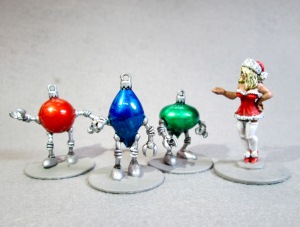 This will probably wrap up what Christmas figures I get done for his year; since, with the Christmas activity around the house ramping up, my painting time become more infrequent.

via One More Gaming Project http://onemoregamingproject.blogspot.com/2017/12/some-recent-christmas-themed-painting.html
from Tumblr http://tumblr.hawks-club.org/post/168191823828
via IFTTT