I needed a snapping turtle for the Ghost Archipelago Bestiary, and the easiest way I could think of to get one was to simply convert one of the Bones 2 Spikeshell Warrior figures (from the Swamp Things set) that I still had lying around.

I prepped the figure in the usual way; soaking it in a dish of water with a couple drops of dish-soap added, then giving it a light scrub with a soft toothbrush, and then rinsing and drying it.  I then carefully cut off his arms, legs, and head.  I also cut away his shield and club. 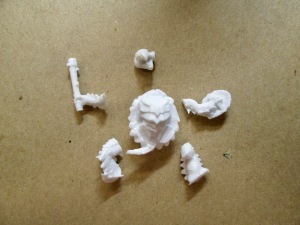 Next, I trimmed the underside of his shell so it would sit flatter on a base.  After that I trimmed his head and his limbs so they would fit the shell better in what would be it’s new horizontal orientation.  I then glued all the parts back together.   I then glued the figure to a black-primed 1" fender washer with Aleene’s Tacky glue, and then glued the washer-mounted figure to a tongue depressor with a couple drops of the Elmer’s glue.

I began by painting the whole figure with a 50/50 mix of Americana “Avocado”, and Apple Barrel “Apple Black Green”.   When they were dry, I gave the entire turtle a wash with Citadel Agrax Earthshade" wash.

When the wash was dry, I drybrushed the turtle with Folk Art “Grey Green”.  After that I painted his eys with Reaper MSP “Holly Berry”, and then painted the inside of his mouth with Apple Barrel “Flesh”.  Then, when the flesh was dry, I agve his mouth a wash again with the “Agrax Earthshade”.  When the wash was dry, I  added some quick highlights to his tongue with the base “Flesh”.
Lastly, I painted the base with Americana “Raw Umber”.
I let the figure dry overnight and the next day I gave it a coat of Americana “DuraClear Matte” varnish.    Then, when  the varnish was dry, I used some white glue to flock the base.  Another overnight dry, and I sprayed it with Testor’s Dullcote".

I’m pleased with how this little fellow came out.  It was just a quick conversion, but I think he makes a snappy little snapping turtle! 🙂

via All Bones About It http://allbonesabout.blogspot.com/2018/01/spikeshell-warrior-converted-to.html
from Tumblr http://tumblr.hawks-club.org/post/170004802693
via IFTTT