[Edit: I meant to publish this yesterday (Monday the 24th), but got so caught up in Christmas Eve activities, I totally forgot.  Now that Christmasing has quieted down for a moment, I thought I’d take the opportunity to get it on the blog. Enjoy and Merry Christmas!)
This past week I  once again mined my Bones backlog for something quick and simple that I could squeeze in painting among the usual pre-Christmas chaos.  I also, wanted something I could give a Holiday or Winter spin, and thus I landed on the Were-armadillo figure from the Bones 3 Stoneskull Expansion, which I thought would make a pretty good “Holiday Armadillo”.

For those of you who weren’t regular watchers of the 80s-90’s sitcom “Friends”, the Holiday Armadillo is a character made up by one of the show regulars, named Ross, in one of the Holiday episodes.  Ross wants to teach his son, who is half Jewish, about Hanukkah instead of focusing on the Christmas holiday as is usually the case.  In the end though, Ross gives in to his son’s desire for Santa to visit, and tries to rent a Santa costume, only to find out there are none available. In a desperate move, he settles for an Armadillo costume, and comes up with the story that he’s the Holiday Armadillo, Santa’s half-Jewish friend and assistant.  This leads to a great opportunity for Ross to talk about Jewish traditions with his son.
In subsequent years, the Holiday Armadillo has taken on a bit of a life of its own, and a quick Google search reveals all sorts of T-shirts and ornaments available for purchase, as well as a generous assortment of memes.
My goal was to try and copy, as best I could, the coloration of the costume.
[youtube https://www.youtube.com/watch?v=VH-6u-3qglY]

I prepped the figure in the usual way; soaking it in a dish of water with a couple drops of dish-soap added, then giving it a light scrub with a soft toothbrush, and then rinsing and drying it.   I then, after clipping the edges of the figure’s integral base to make it smaller,  glued the figure to a black-primed 1.5" fender washer with Aleene’s Tacky glue, and then placed the figure in my painting grip.

I began by painting his back armor with Americana “Mississippi Mud”, and then his chest plates with Accent “Golden Harvest”.  After that, I painted his legas and arms with Accent “Real Umber”.

I then decided to repaint the middle back armor section with Folk Art “Teddy Bear Brown”, and .  used the same color to paint his tail.  Afterwards, I painted his face and hands with Anita’s “Burnt Sienna” and then painted his claws and nose with Americana “Bleached Sand”. 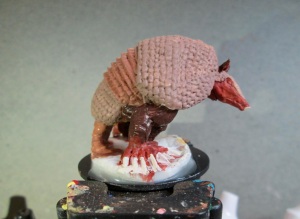 Then, after everything had overnight to dry, I gave the entire figure a coat of Citadel “Agrax Earthshade” wash.  When the wash was dry, I drybrushed is upper and lower back armor, as well as the small bit of armor on his head with Crafter’s Acrylic “Storm Cloud Grey”, and then a little Folk Art “Platinum Grey”.   I then painted the eyes ceramcoat “Black”, and highlighted his face and hands with a mix f the base “Burnt Sienna”, and some Crafter’s Acrylic “Orange Spice”.

Next, I highlighted the middle section of back armor with a mix of the “Storm Cloud Grey and Americana "Khaki Tan”, and then highlighted his underbelly with Crafter’s Acrylic “Daffodil Yellow”.  After that, I highlighted his arms and legs with a drybrush of Americana “Neutral Grey” mixed with Americana “Light Cinnamon”, and highlighted his claws and nose with the base “Bleached Sand”.  I wrapped things up by highlighting his tail with the “Khaki Tan”.
Lastly, I painted the base with Ceramcoat “Snow White”.
I let the figure sit overnight, and the next morning I gave it a coat of Americana “DuraClear Matte” varnish.   Later that afternoon I flocked the base using Woodland Scenics snow flocking.  Another overnight dry, and I sprayed them with Testor’s Dullcote". 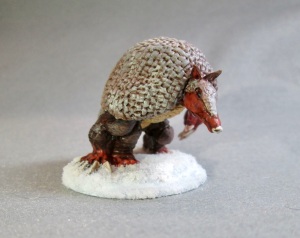 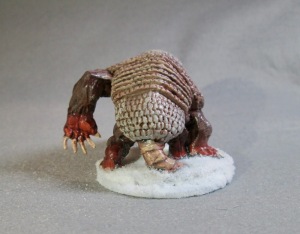 I’m happy with how this fellow turned out.  The yellow should have been a little paler to truly match the costume; and seeing the final photos, I see I need to go back and add some tiny reflection dots to the eyes, but overall I think I came pretty close.

via All Bones About It http://allbonesabout.blogspot.com/2018/12/were-armadillo-bones-3-figure-as.html
from Tumblr http://tumblr.hawks-club.org/post/181411413663
via IFTTT

0 thoughts on “Were-armadillo: Bones 3 Figure, as the Holiday Armadillo!”