Last month we played the first game of our 2019 Ghost Archipelago Campaign.  We had 8 of our 9 regular players in attendance.   Since everyone was test driving new crews, the scenario was just a straight up game with no special rules or events.  For more information about the scenario and game set-up, read another game report here:  Ghost Archipelago ’19, Game 1: An Unexpected Excursion

Ragnam Eichenherz was a self made dwarf, an orphan who had worked hard to parlay his talent into a lucrative business making and selling hardwood charcoal for use by the many smithies in his home town of Vadglim.  Vadglim is a bustling dwarven fishing and shipping port – various ores, metal goods, and even ship building abounds.  And they all need forges and smelters which consume lots of charcoal.

Until recently, Ragnam lived an unassuming life, some might even call it dull.  But for the past few months, he suddenly found himself performing strange feats that he had never been able to do.  Once he stumbled and fell on the street and found himself inside another dwarf’s house – with some explaining to do.  When one of his employees injured himself at work, a touch from Ragnam’s hand miraculously healed him.  A couple weeks after these events started to occur, Ragnam heard tales about a group of mystic isles.  The isles were reportedly known as the Ghost Archipelago.  The tales told of a magic pool that granted great abilities to those who drank its water.  Abilities much like the ones that he had recently been exhibiting.  And some said the mystic islands had reappeared a few months ago.  Putting two and two together, Ragnam started to think about who his birth parents had been.  Could his real father have visited the mysterious islands long ago?  Its an orphan’s dream to think that they had famous parents.  So many questions were running through his mind….he needed answers. (to be continued…..)

Cut to the present….

Ragnam looked out across the sea from the top deck of his dwarven ironclad, surveying the small island as they approached.  He was making his first excursion into the misty isles in search of his heritage.  During the past several weeks, he had encountered others such as himself and learned that he was a Heritor.  As such he possessed numerous unlocked latent abilities, some of which he was just beginning to fully explore.

Ragnam decided to move forward and signaled his crew.  He had detected other crewa stomping around nearby.  He utilized Wraithwalk to quickly cross a stream and move effortlessly through the underbrush.  The burning sensation caused from using an ability still surprised him – would he ever get used to it?  As he pondered the thought, Ragnam found himself struck by a crossbow bolt that penetrated his armor (caused 9 damage). “Pay attention” he chided himself as he searched for the source of the attack.  He couldn’t spot the crossbowman but he did spot someone wearing shiny black armor moving through the brush.  The way he carried himself, he must a fellow Heritor – which meant a fellow opponent.  He heard one of his crewmen call him Lord Barl. 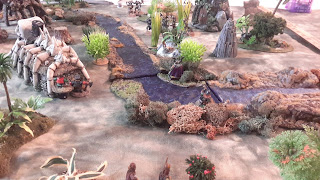 Bengel (Beast Warden) cast Summon Animal.  A large snake slithers out of the jungle, heading towards Barl’s crew.  He then moved forward to assist Ragnam.  As a low mist drifted in (Cloud Cover was cast by one of the nearby wardens), lots of arrows flew through the air without causing any noticeable damage to either crew.

Kippen (Pearl Diver) quickly moved forward to what looked like a treasure chest laying in the middle of a small stream.  Kippen dives down and pulls up the box.  It looked important so he turned and swam down the stream, heading towards the rendezvous point on the beach.

Ragnam watches as Barl reaches down under a small bush and pulls out a small leather satchel (a central treasure).  As Ragnam draws his battle axe, Bengel cast Water of Life.  Without giving notice, Ragnam charges out of the brush and engages Barl in melee.  His heavy axe was no match for Barl’s feeble little sword.  He strikes him hard on the shoulder, the force dropping him to one knee (rolled an 18 +6 modifers, caused 12 actual damage to Barl).  Ragnam calls forth his Deathstrike ability (usuable since he rolled an 18) but fails to properly control it.  He winces as the burn takes its toll (2 damage due to an unsuccessful ability roll).  Barl then makes an attempts to Evade but he fails also (must be a Heritor ability free zone).  Once he realizes he can’t escape, Barl counterattacks.  Parry, parry, CHOP ….Ragnam’s axe bites deeply into Barl’s side, dropping him to jungle floor (Barl would later fully recover).  The leather satchel slips out of his hands and rolls to Ragnam’s feet.  Bengel once more casts Water of Life on Ragnam.

Seeing their Heritor fall, Barl’s archers look for some revenge.  Two shots equals two of Ragnam’s archers laying on the ground.  One of Barl’s crewmen charges Ragnam.  “Such folly” he thinks as he easily dispatches the crewman.  And Bengel again casts Water of Life on Ragnam.  Ragnam momentarily raises his axe to salute the fallen Heritor Barl.  He then reaches down and picks up the satchel.

The large snake is pin cushioned by one of Barl’s archers.  The next crew member to feel the pointy end of an arrow is Ragnam’s hunter, Liraft.  Two arrows hit him and he falls into the vegetation, never to rise again (rolled a 1 for recovery).

Meanwhile, Knurrig has spotted something wedged on top of a hut built out of large petrified animal bones.  He carefully climbed to the top and grabbed a small elongated box.  While he was up there, he saw the two archers fall to Barl’s archers.  He quickly hopped down and ran into the jungle underbrush.

Ragnam calls upon Wraithwalk to quickly cross the stream and move into some heavy brush.  The remainder of his crew slowly fall back to cover him.  Bengel turns to move back.  An arrow whizzes by on his left.  A crossbow bolt flashes past on his right.  He home free….then another arrow strikes him in the back of his his helm knocking him out cold.  Two of the crewmen pause momentarily to pick him up before they continued to move towards the beach.  Eventually they faded into the fog and were safe from any further attacks.

Once back on board ship, Ragnam takes stock of his crew and the treasure they recovered.  Bengel and the two archers will fully recover from their injuries.  However, the hunter Liraft did not make it back.  The crew raised mugs of ale in memory of their fallen comrade.

Not a totally bad result for the first game of the campaign.  Hopefully the lost of the hunter (and his bow) will not negatively affect the crew’s performance next game.  Hopefully Ragnam will able to make a trip to port after game two and hire a replacement.