This past weekend was the Cold Wars miniatures gaming convention, so I needed something real quick to paint last week, since I only had a few days to complete it and I was still frantically painting cavalrymen for my War of the Roses game.  So, I chose the two translucent slimes that came with the Bones 2 Gelatinous Cube & Slimes Add-On set.
I prepped the figures in the usual way; soaking them in a dish of water with a couple drops of dish-soap added and then rinsing and drying.   I then glued them to ½"x1/2" black-primed steel bases with Gorilla superglue gel.  I then glued the figures to a  tongue depressor with a couple drops of the Elmer’s glue each. 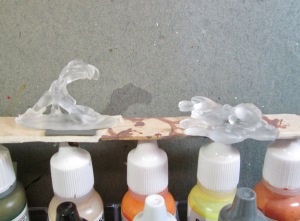 I decided I would go for a Green Slime look with the vertical one, and an Ochre Jelly look for the flat one. So, I began by painting the vertical one with Mr Color “Clear Green” (This is not an acrylic paint and comes with all sorts of scary warnings on the label, so I would not recommend it.  I only have it as I picked up on clearance at a local hobby shop before I realized what it was.  I hope to replace it soon with some Tamiya clear.) , and I painted the flat one with Tamiya Color “Clear Yellow”. 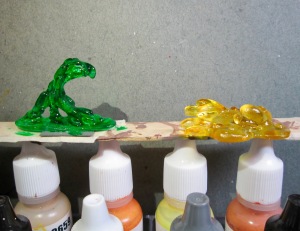 I was happy with the how the vertical one looked at his point, but wasn’t satisfied with the flat one; so I painted the shallow areas and crevices of the flat one with some Tamiya Color “Clear Orange” using a wet brush to thin it a little. Lastly, I painted the base of the green one with Americana “Zinc
When they were dry, I gave them a coat of Americana "DuraClear Gloss Varnish”.  I realized I still wanted the base of the green one to be matte, so I subsequently sprayed the figure with Testor’s “Dullcote”.  When that was dry, I went back over just the slime with the “DuraClear Gloss Varnish”, leaving the base flat. 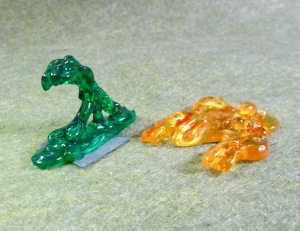 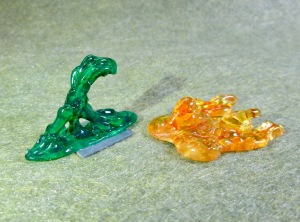 via All Bones About It http://allbonesabout.blogspot.com/2019/03/translucent-slimes-bones-2-figure.html
from Tumblr https://harfordhawks.tumblr.com/post/183540417803
via IFTTT