The Game
Several weeks (maybe months) ago we played the second game of our 2019 Ghost Archipelago Campaign.  We had 7 of our 9 regular players in attendance, which meant we had 3 Central Treasures in play, spaced down the center of the 10’x3’ table so as to be equidistant from all nearby start zones.

We played a scenario called “Spider Island” that was designed by one of the guys in the group.  Besides the regular treasure on the table, each player placed 2 clutches of spider eggs (For a total of 14 in play (2 x 7 players =14).  These eggs, from various degrees of extra-large Tree Spiders, are considered a valuable commodity in magical circles, and for each one recovered the crew got 10 Experience Points and 15 Gold Coins.   We used a specialized Random Encounter table with the following results:  1-5: Roll on the regular Random Encounter table, 6-11: Tree Spider, 12-15: Large Tree Spider, 16-18: Huge Tree Spider, 19-20: Giant Tree Spider.

To the left of Ragnam’s crew was Heritor Cassilda Blackmane, and her Earth Warden, Quartz.  To the left front was Heritor, Arkhan the Cruel, and his Beast Warden Tyril Tallguy.  And immediately across and slightly to the right was my old nemesis Heritor Barl and his Warden Lorria.

Ragnam sat on the top deck of his dwarven ironclad, Iron Fist.  He had sold most of his holdings in Vadglim to purchase the ship.  It was an older ship but still quite seaworthy, or so he hoped.  It should prove to be maneuverable enough in the small islands chains he had heard about.  The islands he was sailing towards.

Ragnam had a good dwarven crew (of course are dwarven crews are good) to man the ship and provide for a shore party.  He had managed to recruit two elven archers who turned out to be twins (All elfs look alike) and a human who claimed to be a highly skilled swimmer and diver (Pearl Diver).  He had recruited a Hunter but unfortunately, Liraft fell to the Heritor’s Barl’s crew on his first expedition.  Ragnam knew he would probably need to replace him sometime soon.  And just as he was leaving Vadglim, and old friend had talked him into taking his son along on his adventures.  The boy’s name was Bengel, and he had developed an ability to use magic.  So far it involved sending rats into the houses of people he didn’t like, or rabbits to eat their gardens.  His father felt it best if he got away from the town for a while and experienced life in the real world.  So Ragnam hesitantly agreed after Bengel promised to follow orders and not torment the crew with his critter spells.

As the crew efficiently went about their duties, Ragnam’s thoughts turned to his next destination, an island called Aranea Insula.  No one talked much about the place except to tell him to stay away.  “Stay away?  Hmmm….wonder what could be hiding on the island.  Maybe a clue about the hidden pool.” he pondered.

“CAPTAIN!” a lookout called to him.  “I prefer to be called Ragnam” he replied.  “Okay Captain, whatever you want.  There’s a ship trailing us.  We can spot its sails when it crests the waves.  Any orders Captain?” Ragnam sighed and replied,  “Maintain our course and keep an eye on them. …and ready the aft gun crews, just in case they are needed.”

The next day arrived without incident as the Iron Fist entered a grouping of small islands.  The other ship was still nearby but they lost sight of it as they threaded their way between the various islets.  When they reached what Ragnam hoped was the right island, he dropped anchor.

Having rowed ashore, Ragam and company moved through the jungle towards the center of the island.  With the death of his hunter, Liraft, he brought along Lahm (Crewman) to round out his crew.  After a couple of hours, they stopped to get their bearings.  As soon as they did, they could hear the sounds of other groups stomping around off in the distance.  Far to the left Ragnam could see the ruins of a large temple covered in thick spider webs.  To the right was a tall obelisk with what appeared to be a small sack sitting on top.  And just about everywhere he looked, he saw what had to be spider webs – big spider webs – gigantic spider webs. “Spiders!” Ragnam says to no one in particular as he spits on the ground.  “Of course there are spiders, what do you think Aranea Insula means?  It’s Spider Island.” offers up Bengel.  He continues, “Aranea, a genus of common orb-weaving spiders.  That means they build spiral wheel-shaped webs, just like those over there. (Pointing to the left)  They grow from very small all the up to several feet acro…”  “Enough lad!” interrupts Ragnam, “We get it, big, ugly spiders everywhere. Stay alert.”  With that, Ragnam directs his crew to cautiously move forward.

Bengel casts Summon Animal and hears a goat braying in the distance.  He calls him to move forward.  Lahm (Crewman) spots a treasure and quickly moves forward.  He picks it up and places it in his backpack. 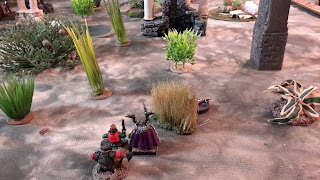 As they slowly move forward, Ragnam could just make out a crossbowman hiding in the brush a ways off.  He identifies the man as one of Barl’s crew.  Ragnam is surprised to see him here after the mauling he gave Barl and his crew last time they met.  “I wonder if his ship was the one following me?” he thought as he surveyed his surroundings.  As he watches, the crossbowman raises his weapon and aims towards his crew.  Ragnam quickly aims his bow and releases an arrow.  “THHUUNNNKKKK!!!!”, it strikes the crossbowman hard in the chest, dropping him to the ground.  While that happens, Snoz (Crewman) runs forward and picks up a treasure.

Kippen (Pearl Diver) is nearly scared to death as a huge spider jumps out of the brush.  Its fangs raked across his arm, an immediate numbing sensation wracks his body – he was poisoned (He also suffered 8 damage).

Meanwhile, Bengel had heard Kippen’s call for help.  He manages to cast Control Animal on the huge spider as Kippen backed away as far as he could.  Good thing too as another huge spider suddenly appeared out of the dense brush.  The two spiders stared at each other for a moment before ferociously charging into combat with each other (This fight would continue for several turns).

Teflin and Teklin (Twin elven archers) see Barl running in the their direction.  They simultaneously raise their bows and release two arrows.  Barl manages to dodge one while the other ended up embdded in his shoulder (caused 6 damage).  The arrow didn’t slow his charge as he slams into contact with both of the archer twins.  The archers lept to opposite sides of Barl, twirling and slicing with their daggers.  Teflin stumbles slightly on an exposed root.  Barl grins at the opening this posed and drew back his sword for a quick kill.  Teklin sees an opportunity and thrusts his dagger at Barl’s neck.  To his surprise, and Barl’s, the dagger connects and slices deeply.  With one hand grasping his throat and look of bewilderment on his face, Barl slowly sank to the jungle floor.  Teflin leans over to check on him, “No pulse.  Looks like he is gone.  Never seen a dead Heritor before.”  (Barl rolled a 1 for his recovery roll.  But luckily his crew had recovered some Lingenberries which allowed them to revive him)  For the two twins, justice had been served – they had both been one-shotted during the last encounter with Barl’s crew.

Having dispatched the crewman, Ragnam now moves to fight Barl’s Freebooter who had run up to contest the treasure.  To his amazement, the Freebooter strikes him hard in the side.  Ragnam calls upon his Heritor abilities to assist but they fail him.  The blood burn was so fierce that he stumbled back a couple of steps (Ragnam took 9 damage, tried to use Ironskin to reduce the damage.  Failed and took 3 additional damage from the Blood Burn.  The Freebooter than pushed him out of combat).  Knurrig (Crewman) continued the fight and managed to avoid getting hit by the Freebooter.  Pimpel (Crewman) is able to fell the Freebooter when his sword glances off his opponents shoulder armor and whacks him up side the head.

Knurrig is struck in the thigh by an arrow (takes 7 damage).  Ragnam moves forward and easily strikes down the archer.  Bengel casts Water of Life on Ragnam to heal some of his previous wounds.

Kippen has moved to the base of a large obelisk to watch the spiders continue their deadly dance.  He glance up and spots something lying on top.  He slowly starts to climb up (Reduced to one action due to the poison).  Barl’s Warden sees what Kippen is doing and uses some kind of magic spell to fly to the top of the obelisk.  Obviously hoping to steal the treasure before Kippen can recover it.  Watching from some nearby cover, Teklin sends an arrow towards the Warden striking her in the shoulder (caused 6 damage).  She wobbled a bit but maintained her footing atop the obelisk.

Ragnam shoots at another of Barl’s archer (causing 8 damage).  Teklin shoots the same archer and takes him out of action.

Bengel cast Water of Life on Kippen, curing his poison.  With a surge of energy, Kippen climbs to rest of the way to the top of the obelisk to engage Barls’s Warden.  After a short fight, he manages to unbalance the young warden.  She falls to the ground with a loud thud and doesn’t move.  Kippen grabs the sack he had spied earlier and starts to climb down.

Seeing the remnants of Barl’s crew fleeing through the jungle underbrush, Ragnam calls for his crew to return to the beach.  Its been a long and rewarding day.

Back on board the Iron Fist, Ragnam puffs on his pipe as he contemplates the day’s events.  All of crew had already recovered from their ordeal, helped along by his young Warden’s healing spell.  His crew recovered 40 gold crowns, an Episcean Helmet, a Superior Dagger (+1 damage), a Bag of Holding, and a set of Divining Rods.  They also gathered up five spider egg sacks that were worth 75 gold crowns.  “It might be time to sail back to port” he mused.

Back in port, Ragnam inquired around for a new Hunter but none were available for hire.  He did manage to recruit a Tribal Guide who had been abandoned there by another crew.  He was than eager to sign aboard and get away from the port town.  Ragnam had another bit of luck while searching for old maps in an Antiquities Shop – an old ship’s compass.  It should prove to be useful.

Well a great game and a nice haul of loot items.  It has taken me way too long to get this report finished.  I still have the report from our third game to post and as well as the fourth game which we just completed.  Time to get busy writing.