This past week, I continued to work on filling out some of the holes in my Ghost Archipelago Bestiary, and painted the Cave Sloth from the Bones 4 Lost Valley Expansion.
I prepped the figure in the usual way, soaking the parts in a dish of water with a couple drops of dish-soap added, then giving them a light scrub with a soft toothbrush, and then rinsing and drying them. The figure comes with the body and right arm pre-glued, and the left arm and base requiring gluing.

So I used some Gorilla Superglue Gel to assemble the parts, and I then glued the figure to a black-primed 1.5" fender washer with Aleene’s Tacky glue after trimming the base so it would fit. I then placed the figure in my painting grip. 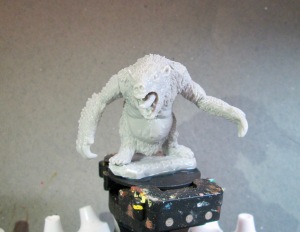 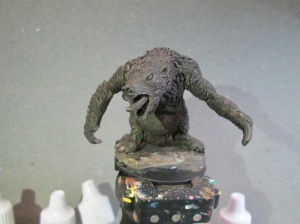 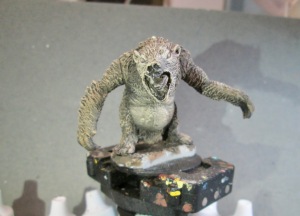 Next, I mixed some Ceramcoat “Black” with Americana “Bittersweet Chocolate” and painted the area around his eyes, his nose and mouth area, and his claws.  After that, I painted the inside of his mouth with a mix of Apple Barrel “Apple Light Pink” and Folk Art “Milkshake”.  I then did his teeth with Crafter’s Acrylic “Light Antique White”

I then applied a wash to the inside of his mouth using Citadel “Agrax Earthshade”.  While it was drying, I painted his eyes “Black”, and then added colored irises using Crafter’s Acrylic “Cinnamon Brown”.  I also painted the insides of his nostrils with the Black".  Next, I highlighted his claws using Crafter’s Acrylic “Storm Cloud Grey”.  I went back and added highlights to the exterior of his nostrils with Americana “Dove Grey”, and also used this color to do a little further highlighting on his claws. I used some Americana “Snow White” to highlight his eyes.  The inside of his mouth was dry now, so I also used the “Snow White” to highlight his teeth.  Lastly, I painted the entire base with “Americana "Mississippi Mud”.
I let the figure dry overnight and the next day I gave it a coat of Americana “DuraClear Matte” varnish.    Then, when  the varnish was dry, I used some white glue to flock the base.  Another overnight dry, and I sprayed it with Testor’s “Dullcote”.  When the “Dullcote” was dry, I went back and hit is eyes with a little Americana “DuraClear Gloss” varnish. 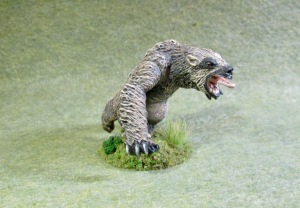 I’m really happy with this big fellow.  For a simple figure I think he came out with a nice bit of character.

via All Bones About It http://allbonesabout.blogspot.com/2019/05/cave-sloth-bones-4-figure.html
from Tumblr https://harfordhawks.tumblr.com/post/184689050833
via IFTTT