This past week I also painted the Fungal Handmaiden from the Bones 4 Darkreach Expansion set.   I’m considering an “Island of the Living Mushrooms” scenario for our Ghost Archipelago campaign, and wanted to start working on the Mushroom folk from the Darkreach set.  I didn’t want to jump right in with the big Queen figure until I worked out exactly how I wanted to paint these.  I had seen someone on the Reaper Forum who had done their mushrooms in very pale muted colors, and I wanted to try for something a little like that as well.
I prepped the figure in the usual way; soaking it in a dish of water with a couple drops of dish-soap added and then rinsing and drying.   I then glued the figure to a black primed 1" fender washer with Aleene’s Tacky glue.  I then set the washer in my painting grip.

I was planning on doing this figure in a series of washes, so I began by painting the entire figure with Americana “Snow White” 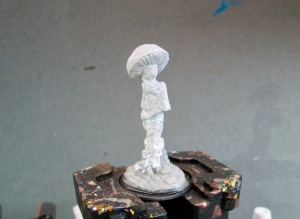 I then gave the “clothing” a wash with very thinned Ceramcoat “Denim Blue”.  After that, I did the top of the cap with a wash of very thinned Americana “True Blue”.

Next, I used the “Snow White” to touch up areas of the face, arms, hair and underside of the cap where the blues had mistakenly spread.   I then gave the face and arms a wash with some Citadel “Reikland Fleshshade” wash.  When that was dry, I gave the underside of her cap and her hair a wash with the very thinned Americana “Antique White”.   I then painted her eyes using Americana “ Light Cinnamon” for the socket shadows and Accent “Real Umber” for the pupil dots. 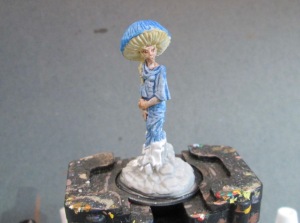 I then highlighted the face and arms with Crafter’s Acrylic “Light Antique White”, and highlighted the hair and underside of the cap with Americana “Bleached Sand”.  After that, I painted the specks on top of the cap with the “Snow White”.
It was now time to work on the rocky outcropping the mushroom was growing from.  I began by painting the outcropping and rest of the base with Americana “Zinc”.  When dry, I gave the base a coat of some Citadel “Nuln Oil” wash. When the wash was dry, I gave it alght drybrush with some Folk Art “Porcelain White”.
I let the figure dry overnight and the next day I gave it a coat of Americana “DuraClear Matte” varnish.     Then, another overnight dry, and I sprayed it with Testor’s Dullcote". 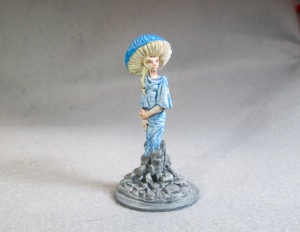 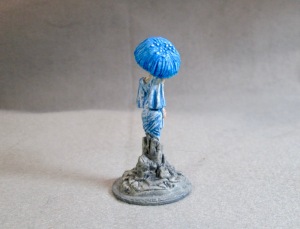 I’m really happy with how she came out.  I like the effect of the pale washes and they were relatively easy to do..

via All Bones About It http://allbonesabout.blogspot.com/2019/06/fungal-handmaiden-bones-4-darkreach.html
from Tumblr https://harfordhawks.tumblr.com/post/185884281813
via IFTTT