Welcome back dear reader for the latest installment on my US armored forces!  I needed to add more US vehicles for my Normandy Breakout scenario which uses the What a Tanker© rules by the UK-based company Too Fat Lardies.  I do modify these rules for the scenario.  For those who missed them (like some of the HAWKS did because I used the wrong hashtag!), the posts about the other vehicles and playtests for this scenario can be found at these links:

I am planning on running this scenario at three upcoming events:

This project, with the possible exception of an additional stray German vehicle or two, completes the list of vehicles I need for the scenario.  In looking for vehicles, I wanted to add some Shermans, another M10 Wolverine, and an M18 Hellcat.  I found a deal on a box of 5 plastic British Shermans M4A1’s with cast hulls that would work.  I would have preferred getting models like my M4A2 – but that one is OOP and even the American Shermans that Battlefront is selling now are basically M4A1’s.  So these British ones, properly assembled, at 15mm scale, is just fine.

For an M10, I converted an Old Glory M10 Achilles by using a leftover gun to make it look like an original version.  Technically, is that a conversion of a conversion?  After seeing how John at Just Needs Varnish! added a plastic card underneath his models to make them easier to paint, I was inspired to add a small steel base under my M10 chassis.

The M18 Hellcat I found was really nice – and I wish I had another as well.  This one had a slightly broken front fender, but its hardly noticeable.  In any case, I used enough mud and dirt to obscure that problem.

I also decided to use the Battlefront naming decals on all of these to help differentiate them on the tabletop – as well as by adding spare road wheels, spare tracks, and other accouterments to all of the vehicles.  Thanks to my good friend Jeff Smith, the Shermans got some real steel in them by means of ball bearings in the chassis.

I decided to weather these slightly differently by adding pigments – inspired by Pete’s blog and a Merkava he built.

After a few in-progress shots, I will describe the vehicles alphabetically by name and type. 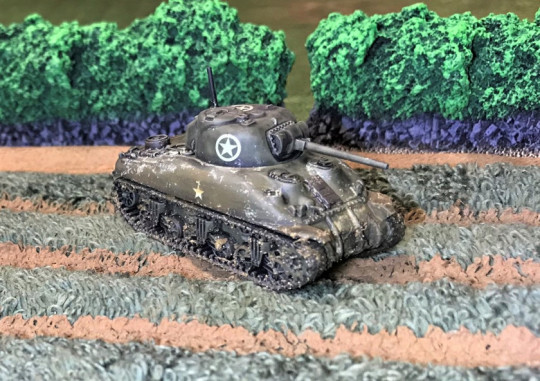 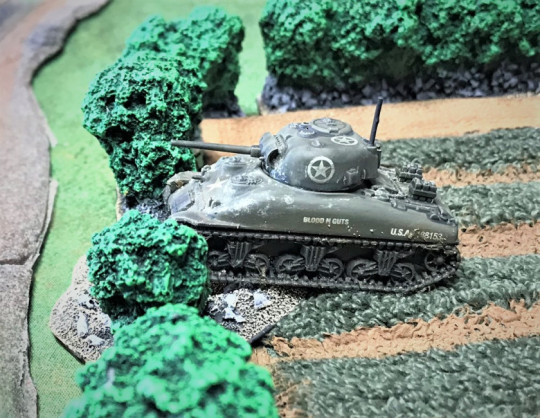 “Blood ‘N Guts” crossing an opening in the bocage. 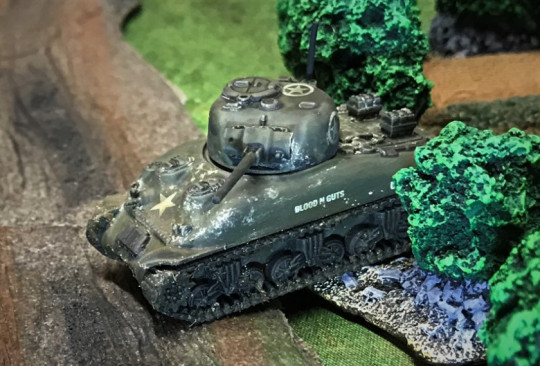 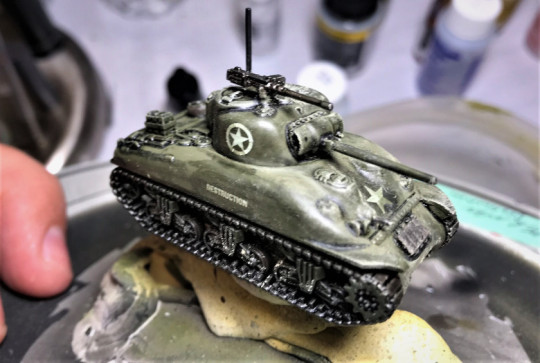 “Destruction” early in the weathering process right after decal application. 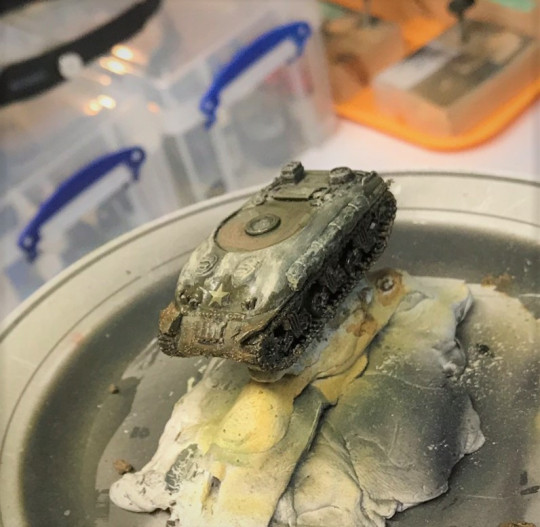 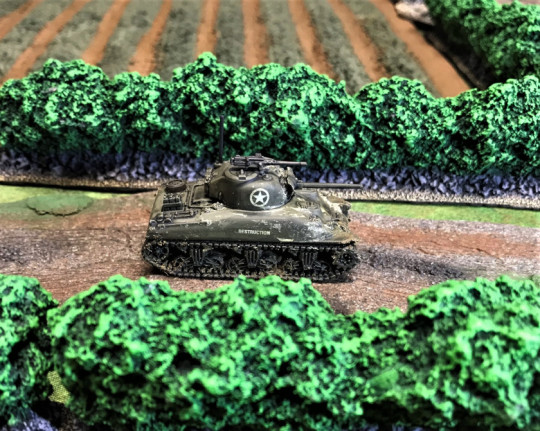 “Destruction” moving down the road between the hedgerows. 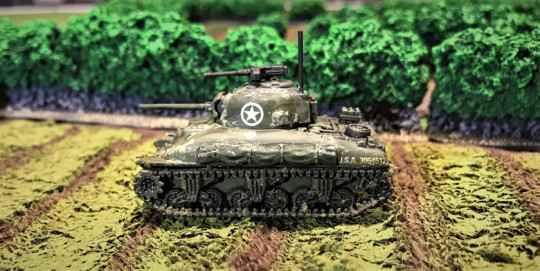 “Destruction” left side – as an experiment I used Citadel contrast paint on the tarp. 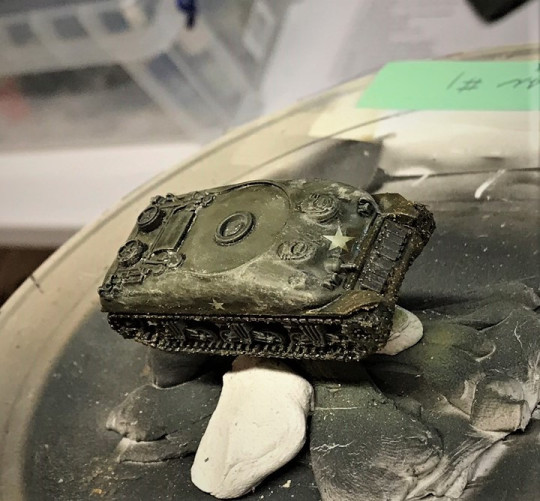 “Let ‘Er Buck” chassis early in weathering.  I chose this name/decal in honor of Buck Surdu, though as an infantryman he may object… 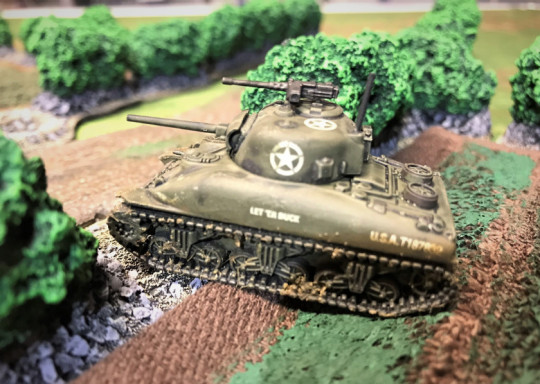 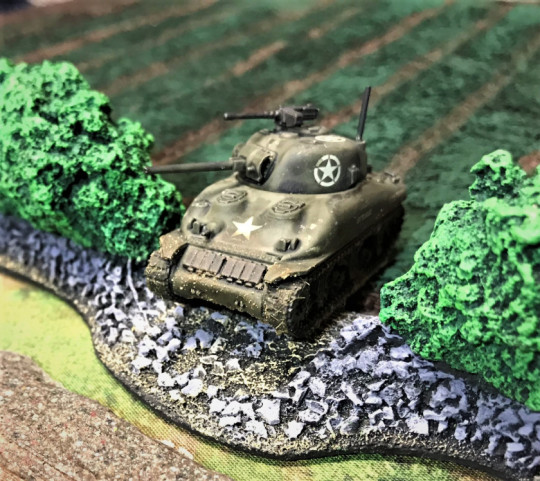 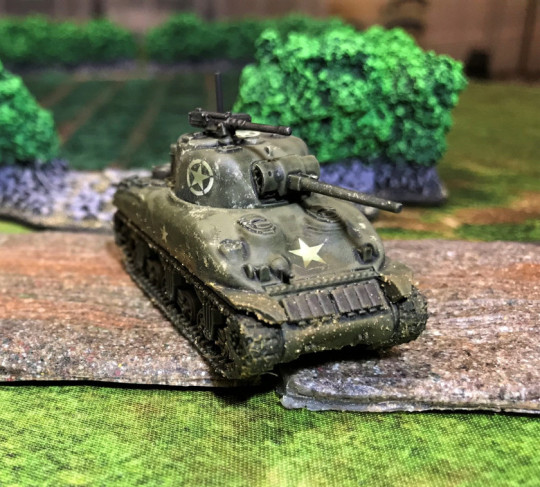 Note on all these that I used different gear in different stowage to differentiate the tanks. 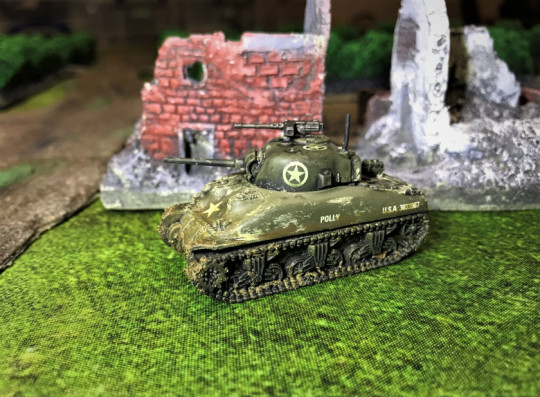 “Polly” by some ruins.  As I have a pet cockatiel named Caesar, this is as close as he gets to an avatar tank. 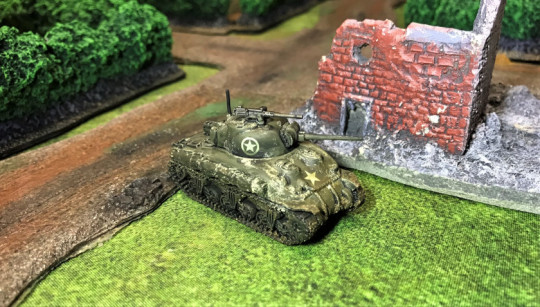 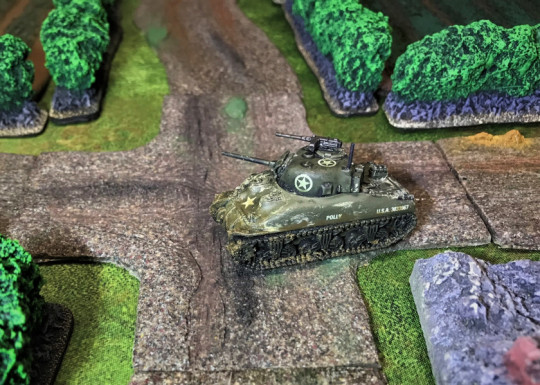 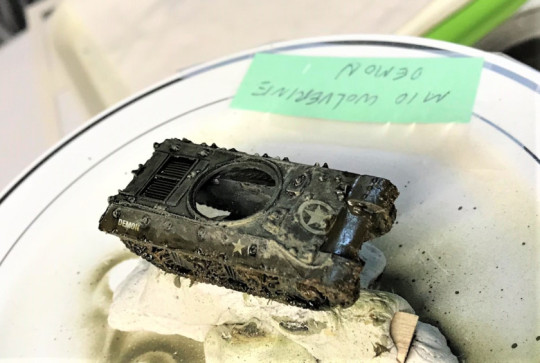 “Demon” getting dirtied up. 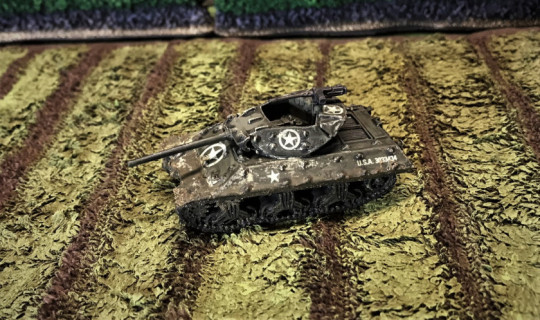 “Demon” crossing a field.  I did not buy crew for this one. 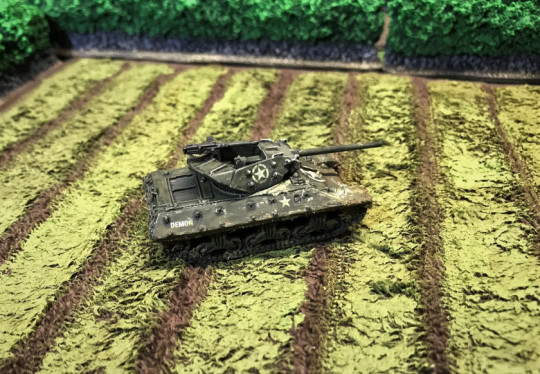 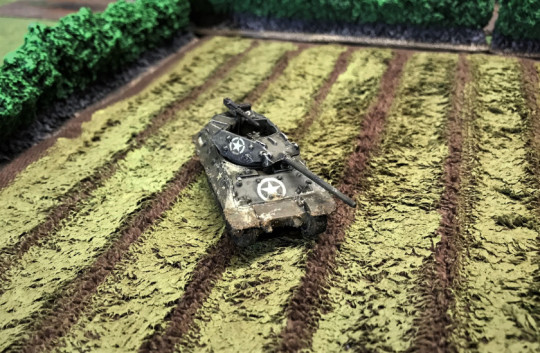 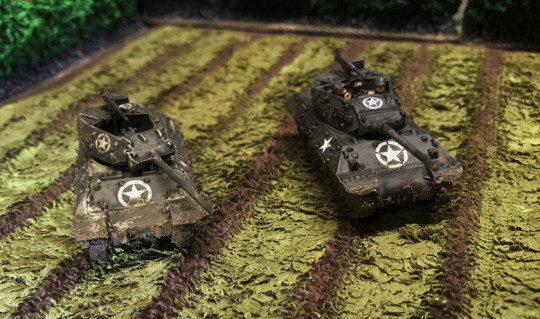 On the left, “Demon” from Old Glory, on the right, my previously built M10 from Battlefront for comparison.  I used more mud and dirt on “Demon” as it was a much less detailed casting. 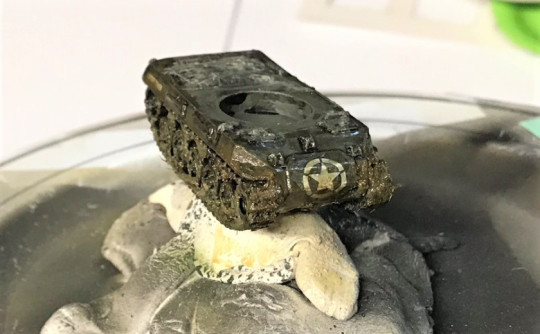 M18 Hellcat “Lucky Tiger” chassis all dirtied up.  I chose the name/decal as I am sure sometime it will face a Tiger I or Tiger II, and it will need to be lucky! 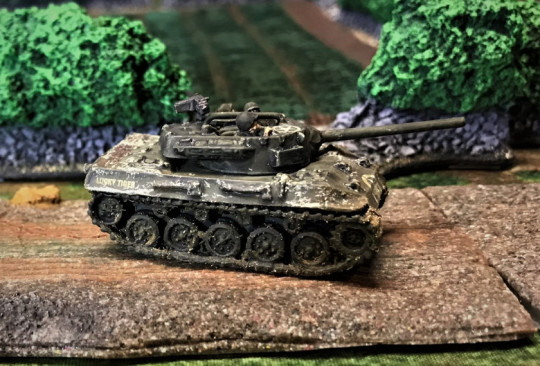 “Lucky Tiger” completed and moving down the road. 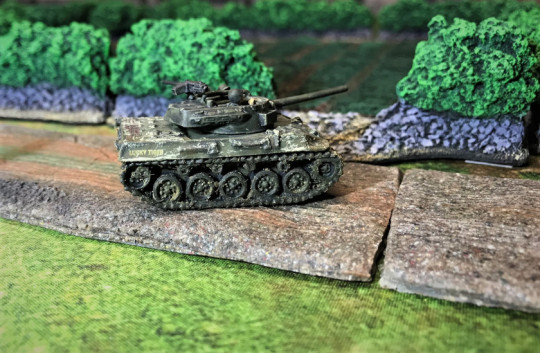 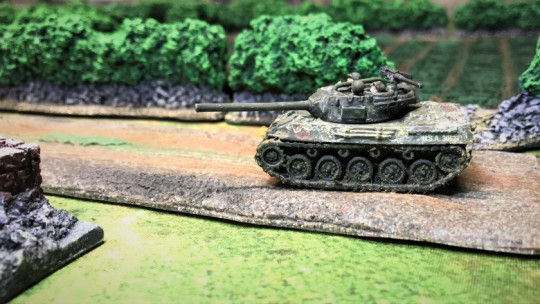 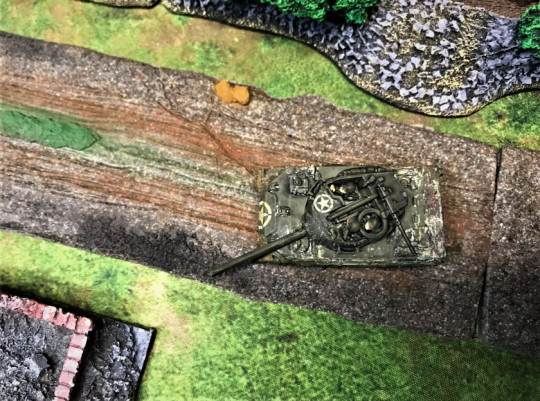 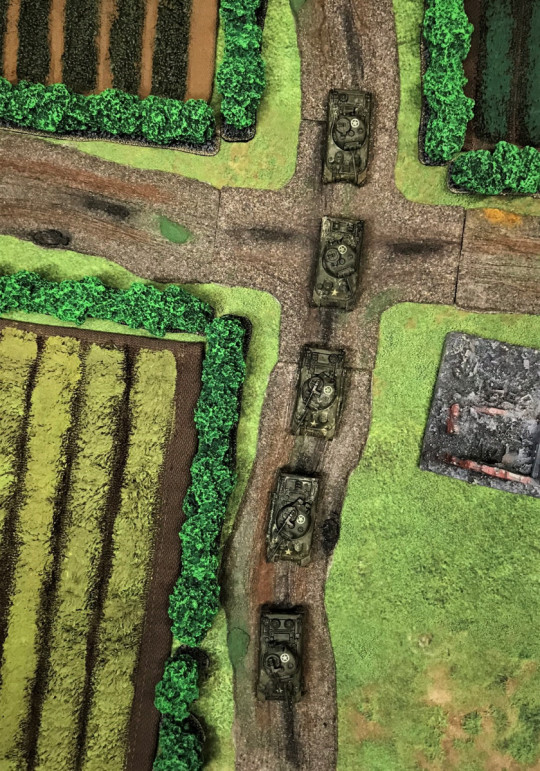 Shermans in convoy on road. 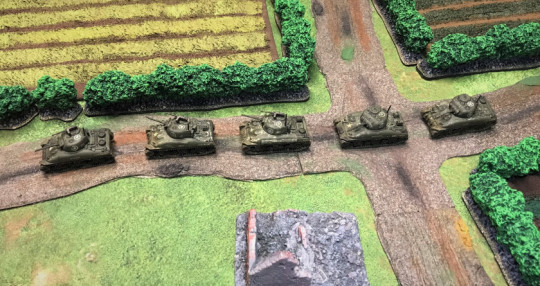 Frontal view of the five Shermans. 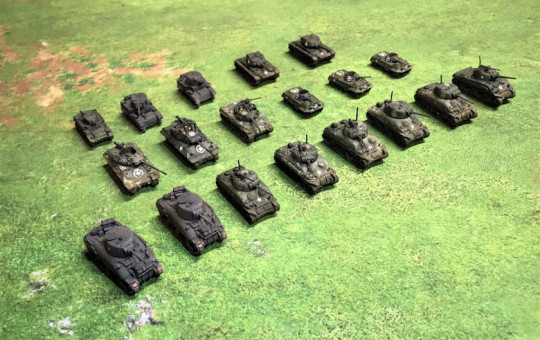 The US vehicle menu for the scenario looks like this now. 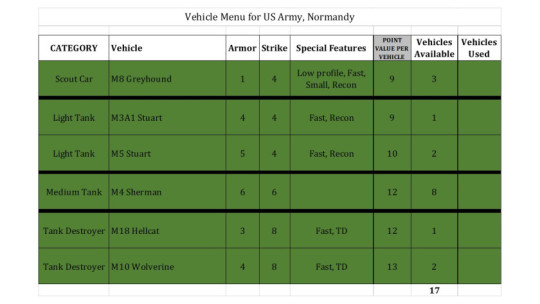 I hope that you enjoyed this post – and thanks in advance for your feedback in the comments section!

from Mark A. Morin https://markamorin.com/2019/08/12/us-tanks-and-tank-destroyers-for-normandy-breakout-scenario/
via IFTTT
from Tumblr https://harfordhawks.tumblr.com/post/186962535688
via IFTTT