The wonderful Barrage wargaming convention was held back on September 27-28 in Havre de Grace, Maryland.  It is run by the Harford Area Weekly Kriegspielers (HAWKS), and I have attended the last few years and run a few games there as well as a GM.  This year marked the 25th Anniversary of the convention.

The trip was enjoyable – and even though it’s been over a month since the event – I wanted to share some of the pics and details of the event from my perspective.  It’s not an all-encompassing review – but hopefully it will give you a flavor of the event and some nice views of some worthwhile and visually interesting tabletop games. 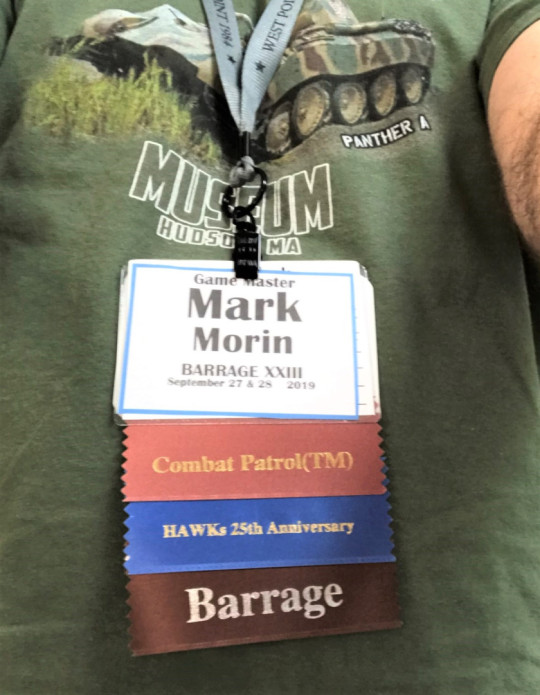 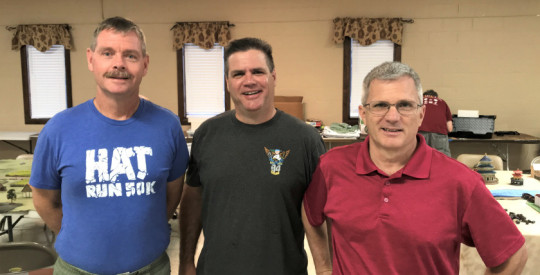 Three only slightly aging West Pointers – Dave Wood (’84), me (’84), and Buck Surdu (’85).  Dave and Buck are in the HAWKS and going to the convention doubles as a mini-reunion for us.  Plus I get to see how much better in shape they are than I am.

I drove down from Massachusetts and arrived Thursday night (the night before the convention) to help the HAWKS set up.  As a bonus, we got to play a few turns of Eric Schlegel’s Antietam: The Cornfield game using the A Union So Tested rules set.  It was a fun start.

The convention started in earnest on Friday – and I got a chance to check out some amazing tabletops.  Bill Molyneaux had a brilliant Boxer Rebellion game that had incredible terrain.  I did not get to play this game, but would have loved to try it.

game.  Here you can see a Napoleonic game (run by Dave Wood), a Gundam game, and a really neat G.A.S.L.I.G.H.T.  Sherlock Holmes themed game (run by Sam Fuson).   There was a Flames of War Tournament.  I have not played that game despite having (as regular readers know) a TON of FoW models.  The games looked a bit crowded figure-wise – and maybe that’s normal for that game.  Note the US TIE fighter (the gamer said he did not have a proper US plane so he painted this model)…not sure about that particular add personally.

I really wanted to try another game of Feudal Patrol

.  I had played one at HUZZAH! run by Duncan Adams earlier this year.  Feudal Patrol

– except it is for pike and shot periods and earlier.  I am hoping to write an Aztec supplement for it for Buck.

Chris Palmer ran a War of the Roses scenario involving securing an abandoned supply train of three wagons.   It was just the two of us, but as Buck came available, he joined in on Chris’ side.  I started off well, but in due course I got my ass handed to me by Buck and Chris!  Still, I was glad to try it and I feel confident that this will be another great system by Buck. 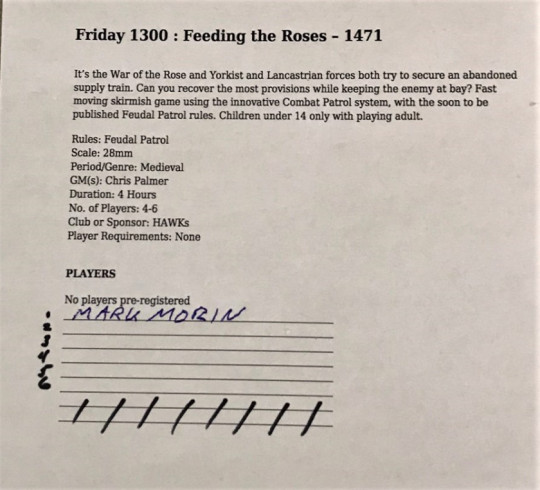 Not the greatest sign up!  Too bad as it was fun. 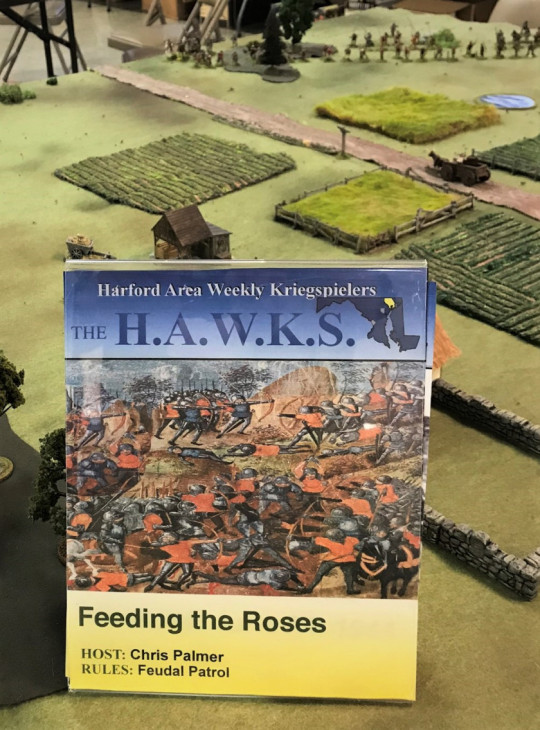 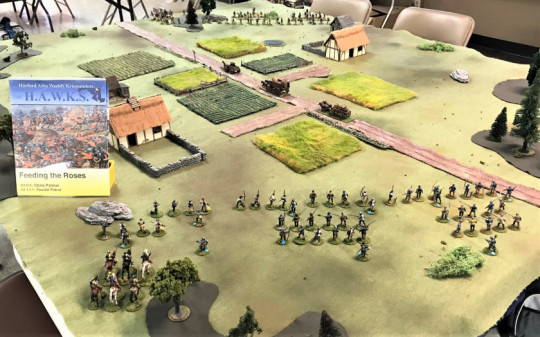 My forces, with the enemy Yorkists across the table.  The abandoned wagon train (the objective) is in the center. 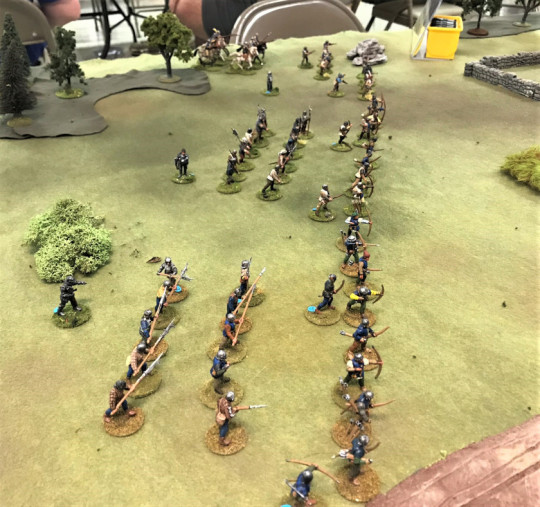 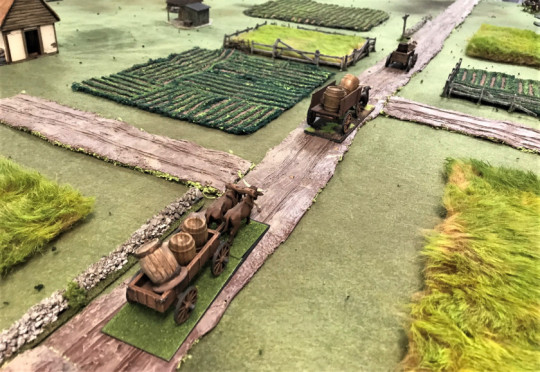 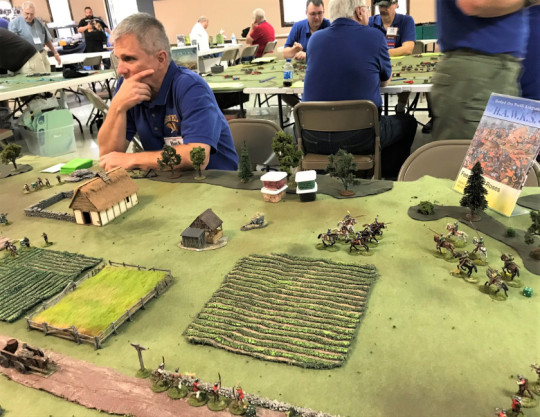 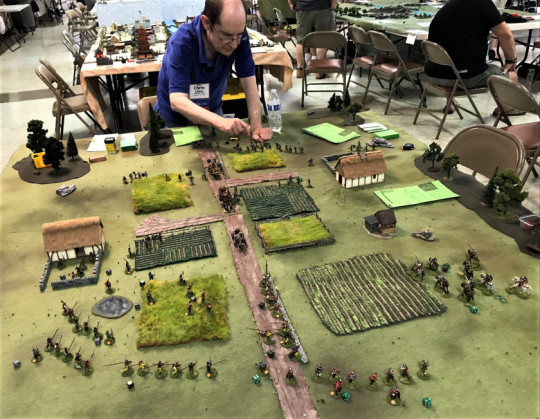 Chris moves his Yorkists up and takes two wagons. 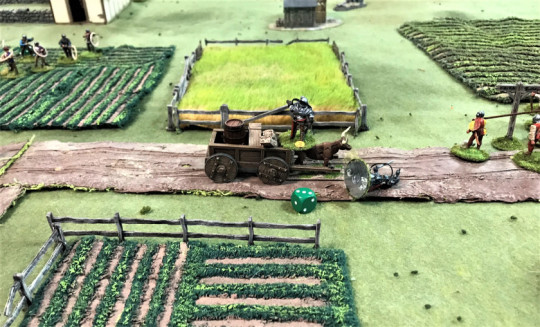 I moved a leader on top of the remaining wagon to seize it.  Unfortunately, the Yorkist crossbowmen ended that effort by turning him into a pin cushion, and pinning his subordinates in the process. 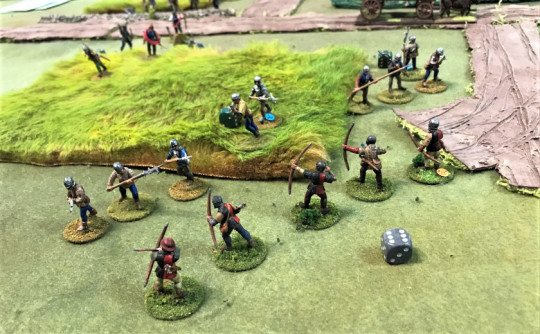 After this game, I walked around and took some more shots of some cool tables.  There was a 54mm scale ACW game, and a 54mm medieval mayhem game.  Greg Priebe had a Poland 1940 Combat Patrol

game for replete with an armored train.  Lastly, there was an Aliens-inspired scratch built table that was impressive.  These shots are below. 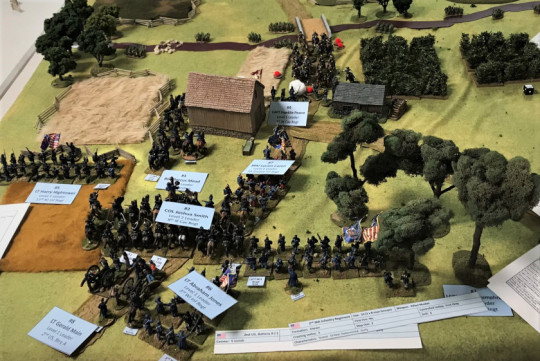 Another ACW game, in larger scale.

The last game that I played on Friday was with Dave Wood and another player.  It recreated the scenario made famous by the events portrayed in the movie Black Hawk Down.  The rules were Force on Force, which had an interesting set of mechanics, but very complicated for a short game.  We actually ran the game twice, with Dave and I as the Americans.  All agreed that the scenario was impossible to win for the US.  Still, the GM Carl Olsen made the experience enjoyable. 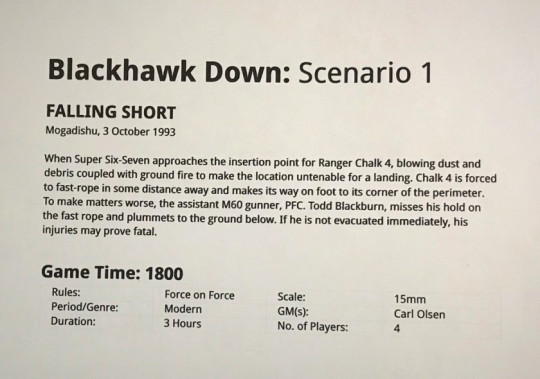 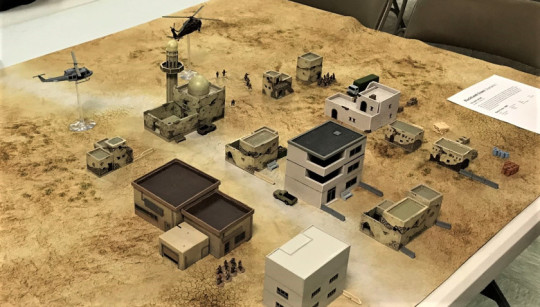 The tabletop for the scenario. 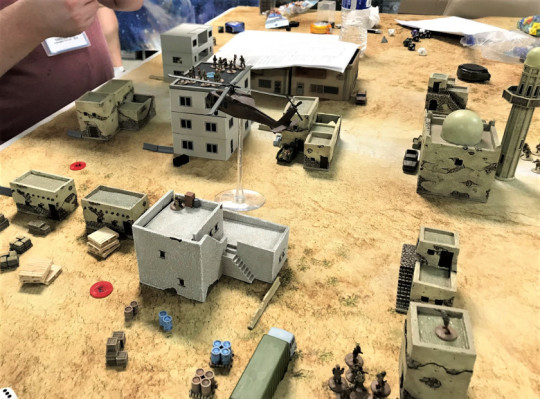 Even with air support, the mission was too difficult for the US.

That finished off Friday.  Saturday presented an opportunity to play the massive Combat Patrol

Star Wars Battle of Hoth scenario (from The Empire Strikes Back) of the Battle of Hoth that Buck and Greg Priebe ran at Historicon.  It was pure eye-candy (as you’ll see below), and a blast to play.  We had a full table of 10-12 players.  The Combat Patrol

Star Wars supplement was used – and was easily picked up by the players who were new.  Buck and Greg did an outstanding job of running this massive game.

I played with several other players on the Imperial side with the goal of destroying the Millennium Falcon before it could fly out of the cave it was hiding in with the other rebel ships.  We succeeded in eventually knocking out the shield generator with an AT-AT.  Subsequently the Millennium Falcon was destroyed when our forces could get a clear shot.  A strategic victory was had for the Empire! 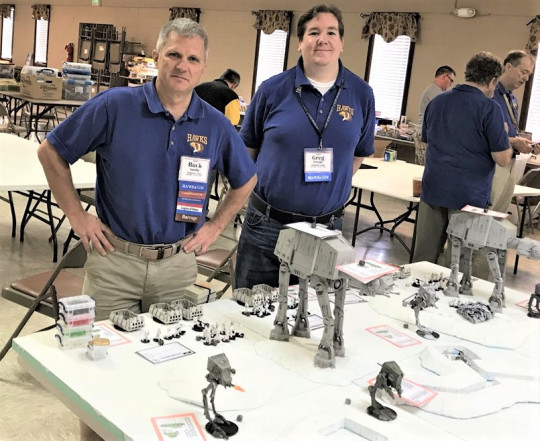 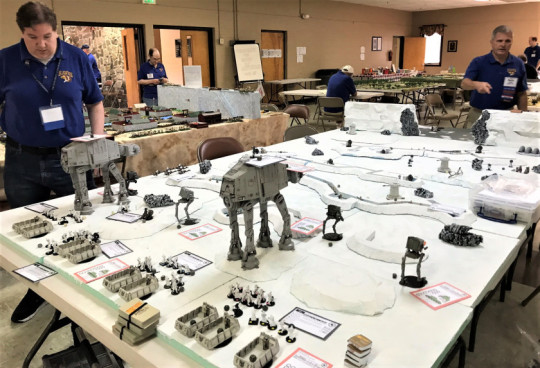 A view from the attacking Imperial forces side – the rebels and their spacecraft were in the cave on the far side.  The shield generator is on the far right.  The rebel trenches and positions were beautiful.  All the models were so fun. 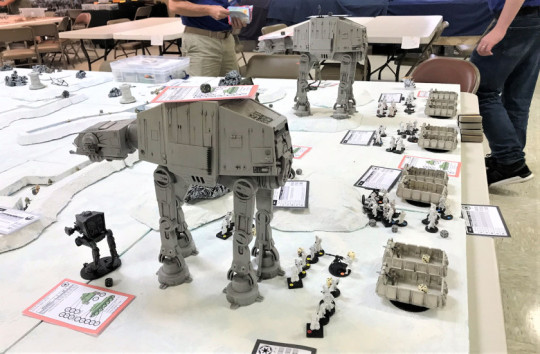 Imperial set up before the game. 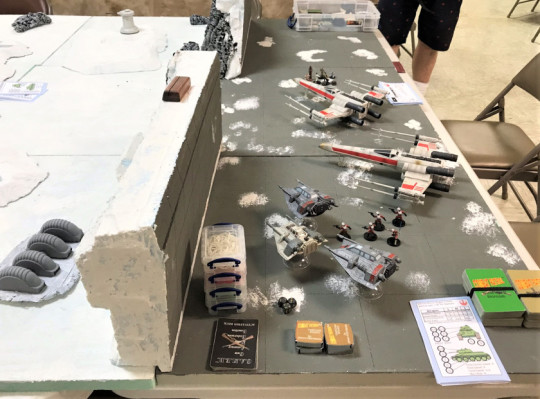 Rebel spaceships getting positioned in cave.  The Millennium Falcon was not yet set up on the top corner. 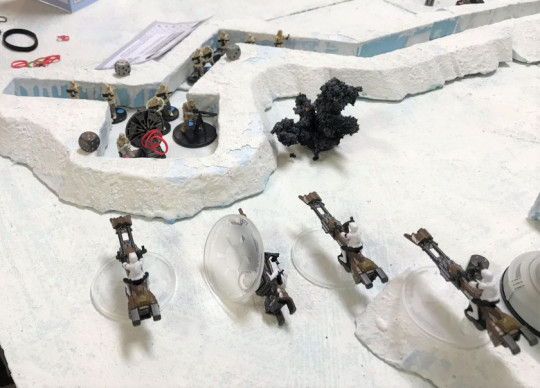 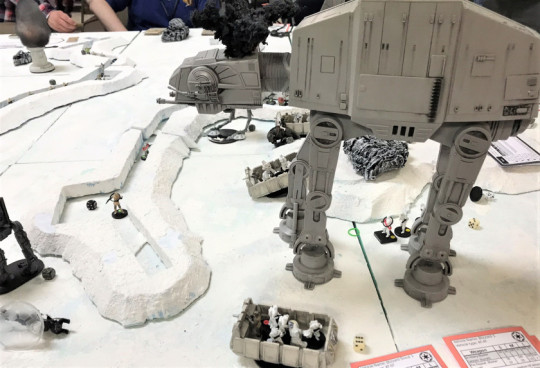 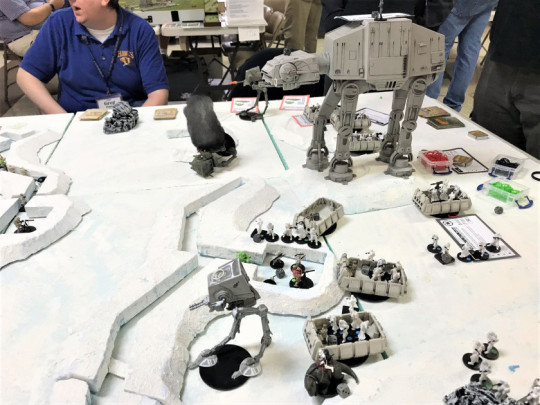 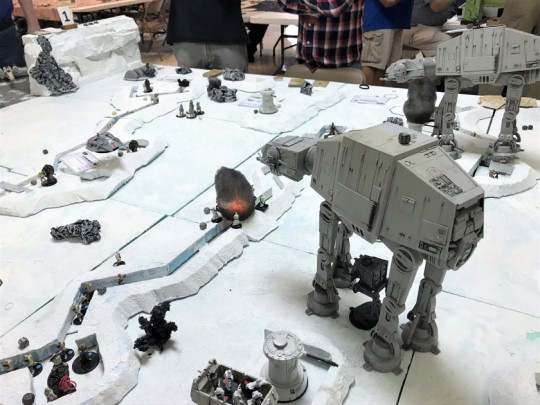 After the victory, I had some time before I needed to set up and run my Normandy Breakout scenario for What a Tanker© that I have previously run a few times.  I took a few more shots of some interesting games.  One of these was a Dungeon Crawl run by a gentleman (sorry as I forgot his name) who makes his own miniatures out of small bits of wood and paints them really well – check them out below.

After this, it was on to setting up and running my Normandy Breakout game.  I have really gotten this game to be a great gaming experience – based on both my opinion and consistent feedback from the players.  This time, I had between 9 and 11 different players as some came and went.

The Germans made some very good decisions on terrain use and vehicle selection.  The Allies did not choose enough reconnaissance vehicles, and were less effective using terrain as a whole.  The Allies did not do a good job at crossing the table – with only a M10 Wolverine (by Dave Wood) and an M5 Stuart (by Buck Surdu) crossing the board.  To be fair, the dice abandoned the Allies at a few critical junctures.

The Germans chose expensive vehicles, such as the Panther D (Greg Priebe), Jadgpanther (Andrew) and Tiger II (run by a woman known as April or “Queen Tiger” in the game), but used them effectively to stop the Allies.   This put them in a points disadvantage, that they made up with their kills.  Don Hogge’s used his SdKfz 233 very well to delay and harass the Allies.  The Germans lost no vehicles, and the Allies lost a total of 5: a Dingo scout car, an M3A1 Stuart, an M10 Wolverine, and two 17-pounder Achilles.  The Allies vehicle choices hurt them (not enough tanks and reconnaissance versus tank destroyers). This had not happened in previous runs, and is a testament to the German players having a good plan.  The final score was 160-123 in favor of the Germans.  I will continue to run this game – it has never been the same twice. 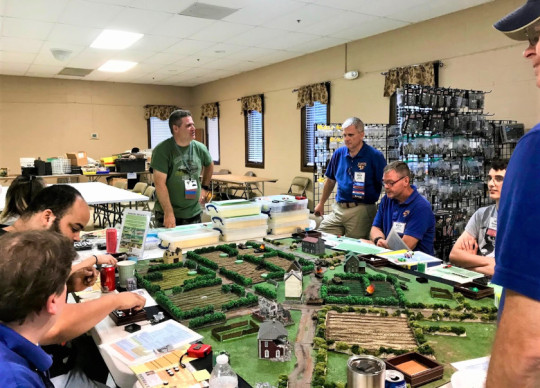 I GM the mid game action (photo by Chris Palmer) 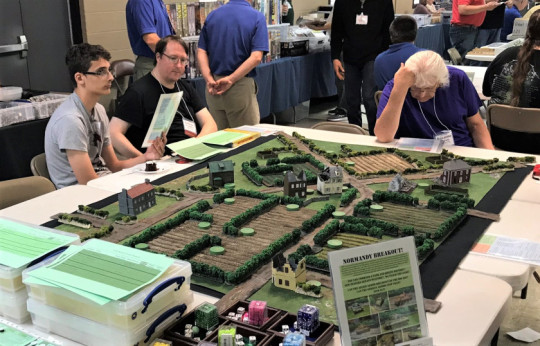 Players on the Allied side get ready to play. 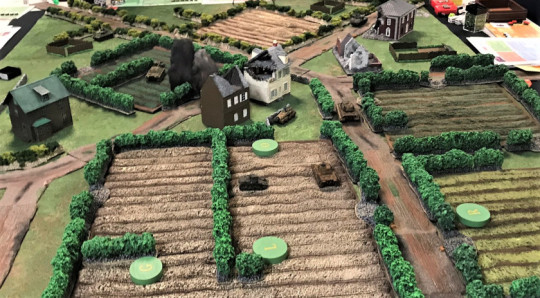 Here the Americans smashed an M3A1 Stuart through a hedgerow – where it discovered a Panther D.  It took the flank shot and managed to do some temporary and permanent damage.

The Panther then turned and knocked the Stuart out – the black smoke indicates that the crew lived and bailed out, but the tank was destroyed.

With a burning Dingo behind him, a Jagdpanther confronts the Achilles “Tabitha” (named after my granddaughter).  German artillery-delivered smoke dissipates in the top of this photo. 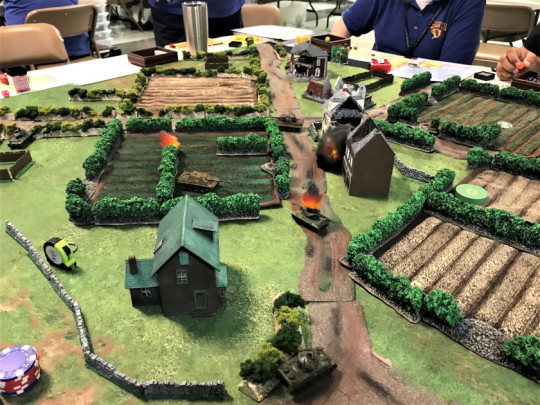 The poor Achilles “Tabitha” is no match for the Jagdpanther, and is brewed up on the next activation. 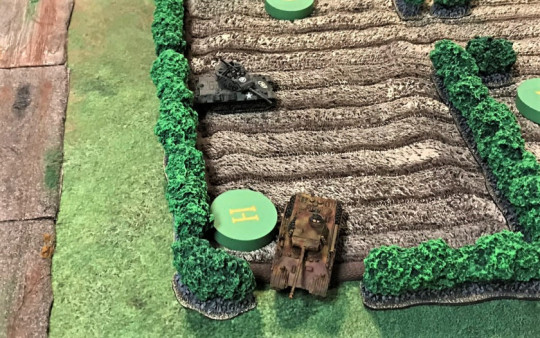 An American M10 Wolverine gets a rear shot on the Greg Priebe’s damaged Panther, but not enough damage is inflicted… 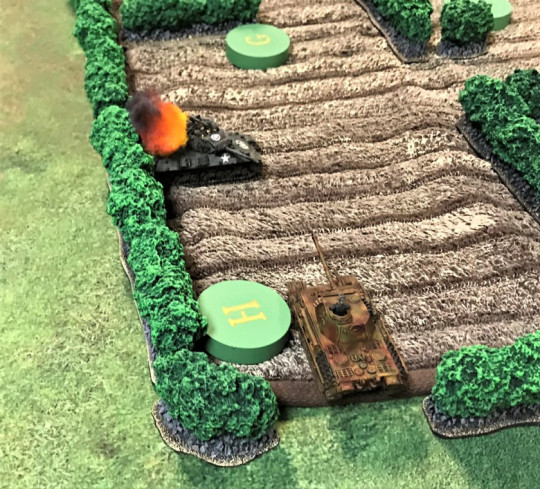 …and on the next activation, the Panther turned and knocked out the Wolverine.

After picking up, the last game I played in was a Roman Circus Chariot game with rules by DeWitt.  My chariot flipped and I lost – but it was fun!

And the flea market was outstanding!

Thanks to the HAWKS for a great weekend!

And thanks to you, dear reader, for looking – feel free to share your thoughts in the comments section!