This past week I painted a pair of the Spirit Beasts from the Bones 4 Dreadmere Expansion.  There was something about this figure that made me think of the Patronuses in the Harry Potter books and movies (And, yes, that is the proper plural; I looked it up!)  So, I decided to try for that glowing white/blue appearance that is the key feature of their appearance.
I prepped the figures in the usual way, soaking the parts in a dish of water with a couple drops of dish-soap added, then giving them a light scrub with a soft toothbrush, and then rinsing and drying them. I then assembled the figures with Gorilla Superglue gel.   After that, I glued them to 1.25" black-primed fender washers with Aleene’s Tacky glue.  I then glued the washers onto a tongue depressor with a couple drops of Elmer’s white glue. 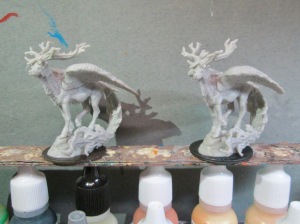 I was going to try these with my new Citadel Contrast Paint, as I thought that would be ideal to give them their blue shadows.  So, I began by prepping them by painting them entirely with Americana “Snow White”. 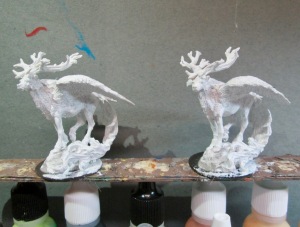 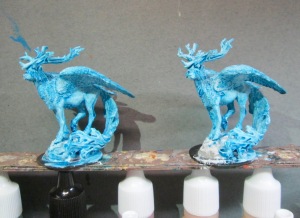 When the Contrast coat was dry, I drybrushed the figures with some of the “Snow White”, and then went back and painted further highlights directly with a brush using the “Snow White”.

Next, I painted the rocks they are standing on with Americana “Charcoal”; and when dry, gave them a light drybrushing with some Crafter’s Acrylic “Storm Cloud Grey”.  After that, I drybrushed them with some Crafter’s Acrylic “Cool Blue”, and then added a few “Snow White” highlights.  Lastly, I painted the bases with Americana “Mississippi Mud”.
I let all the figures dry overnight and the next day I gave them a coat of Americana “DuraClear Matte” varnish.    Then, when  the varnish was dry, I used some white glue to flock the bases.  Another overnight dry, and I sprayed them with Testor’s “Dullcote”. 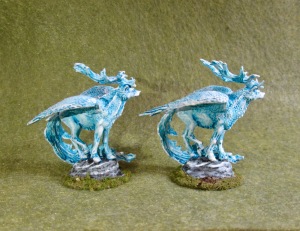 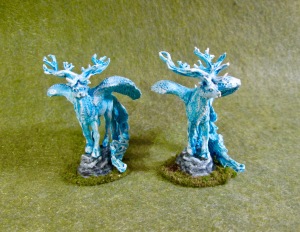 The shot below, using the camera’s flash, helps improve the “glowing” effect I think. 🙂 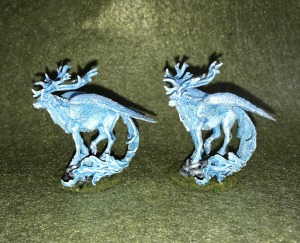 Not too bad, but not quite as glowy as I would like.  Still I think it gets the idea of “Spirit Beast” across well enough.

via All Bones About It http://allbonesabout.blogspot.com/2020/02/spirit-beast-bones-4-dreadmere-figure.html
from Tumblr https://harfordhawks.tumblr.com/post/190626719503
via IFTTT