As mentioned in my last post, after a couple months of pushing hard on the Bronze Age I was ready for a change of pace. Most of my (unchronicled) miniatures work in the past couple of years has been on Reaper Bones 28mm fantasy figures – some for a couple of Ghost Archipelago campaigns that were going on in our club, but also with the longterm goal of building up a pool of figures for D&D or other skirmish or roleplaying games. I still had several sitting around primed and ready to go, so I switched over to that for a while.

First up were some orcs – I’ve been doing these in a medium gray, as I wanted to avoid human flesh tones and also distinguish them from my 20mm orcs, who are green. I had three already, and I added three more this go-round – one with a spear, one with two swords, and one axe-wielding orc who appears to be left-handed. 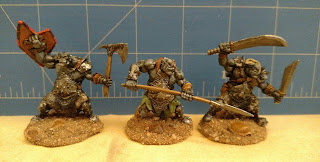 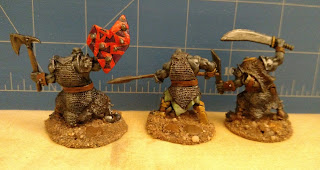 Next up was Alahazra, Iconic Oracle, who could be either a D&D character or a Wave or Wind Warden for a future Ghost Archipelago campaign. 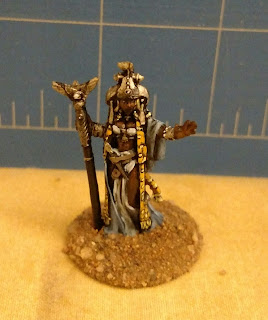 After that, I finally took care of a Cave Bear that had been languishing on my desk for a while. This ended up being pretty quick once I finally buckled down to paint it – almost all dry-brushing. 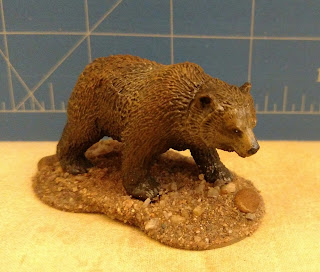 Finally, I painted up a Bones version of Aletheia Edair, Duelist, which I guess must have come from the most recent Kickstarter. It looked to me like she was wearing a slashed doublet under her armor, so I decided to go with a colorful, vaguely Renaissance theme. 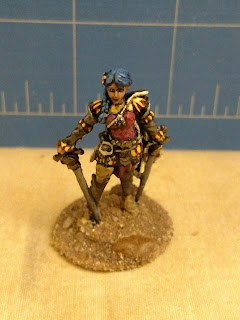 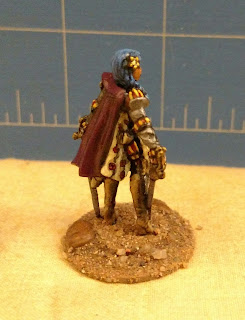 Having had a nice break, it’ll be back to my fourth Bronze Age DBA army – the infamous and enigmatic Sea Peoples…