This past week I painted the two translucent “Killer Fungi” from the Bones 4 Darkreach Expansion.     I had been holding these back since I painted the rest of the Darkreach mushrooms, in hopes that I could figure out some way to illuminate them, without having to include a huge base to hide the battery & electronics; but I finally abandoned that plan because I was tired of them sitting in my waiting-to-be-painted shelf.   This also led me to decide to start making a concerted effort to work my way through the remainder of my Darkreach figures since I had painted a lot of them already. 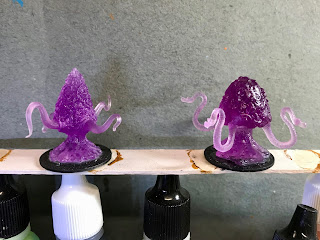 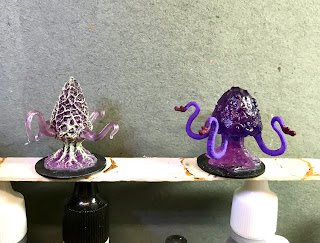 I realized I couldn’t really paint the roots of the mushrooms without painting the bases first, so I took the time at this point to paint the bases on both the mushrooms with Americana “Mississippi Mud”.   I then painted the bottom of the domed mushroom with Apple Barrel “Apple Lavender”, and also used the color to drybrush the top.   While that dried, I used some Citadel “Agrax Earthshade” wash to apply a coat to the underside and roots of the conical mushroom.   I then went back and used the “Nuln Oil” wash to give a coat to the tentacles, underside, and roots of the domed mushroom. 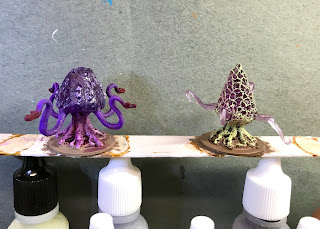 When the washes were dry, I drybrushed the conical one with some Americana “Margarita” to help it pop.  I then drybrushed the domed one’s tentacles, underside, and roots with some of the base “Apple Lavender"  mixed with some Reaper MSP "Breast Cancer Awareness Pink”.   After that, I highlighted the ends of the domed mushroom’s tentacles with some Ceramcoat “Opaque Red”.
I let the mushrooms dry overnight and the next day I gave them and their bases a coat of Americana “DuraClear Matte” varnish. 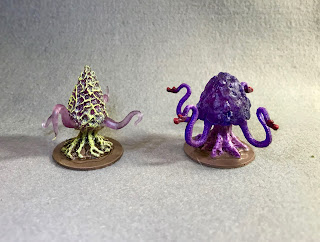 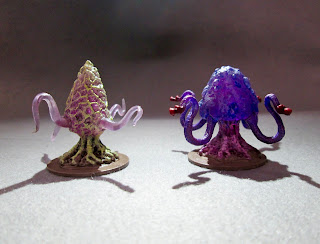 I’m pretty happy with these two fungi.  I’m glad I went ahead and got them finished up.