This past week I painted the big “Cave Spider” from the Bones 4 Darkreach Expansion.
This figure comes on a big 3" integral base, attached by a central stalagmite that connects to the spider’s underside.    I really didn’t want such a big base, as it makes it hard to put figures adjacent when in combat, and makes it hard to fit the figure into close terrain. 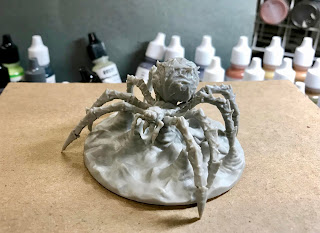 So, the first thing I did was take my Dremel cutting blade and remove a half inch around the outer edge.  This was made difficult by a pair of stalagmites that fell right about at the half inch mark and were too thick to cut through, so had to be cut around to remove them from the base.
Once the excess base was cut away, I prepped the figure in the usual way, soaking it in a dish of water with a couple drops of dish-soap added, then giving it a light scrub with a soft toothbrush, and then rinsing and drying it.  I then glued the spider to a 2" fender washer with Aleene’s Tacky glue.  When the glue was dry, I painted around the edge of the washer with brush on Metal Primer, and when dry, I glued the washer to a large pill bottle with a couple drops of Elmer’s glue. 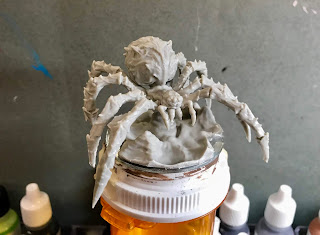 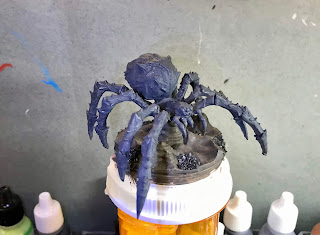 Next, I painted the base by drybrushing it with some Americana "Mississippi Mud”, and then with some Apple Barrel “Rock Grey”, and lastly with a little Americana “Dove Grey”.  After that, I gave the spider a coat of Citadel “Nuln Oil” wash. 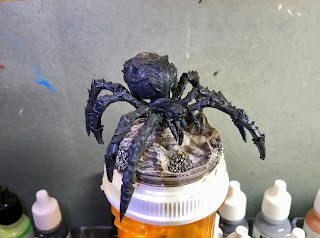 I then drybrushed the spider with a mix of Americana “Zinc” and Crafter’s Acrylic “Purple Passion”.  I followed with a lighter drybrush of a mix of Americana “Grey Sky”, and Apple Barrel “Apple Lavender”.  After that, I painted the fangs with the “Purple Passion”, and then painted the pincers with a Reaper MSP Sample paint that was a purple color (shown in the background of the photo below) 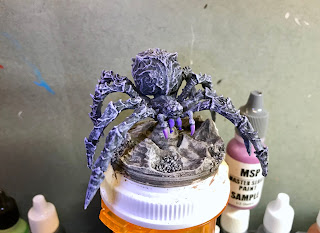 Next, I painted the eyes with Americana “Forest Green”, and then highlighted the fangs with a mix of the “Purple Passion and the "Apple Lavender”.  Afterwards, I went over the pincers again with some Folk Art Color Shift  “Purple Flash”, and then I lightly drybrushed the plate ridges and spikes on the spider’s back with the “Purple Flash” as well.   I finished up by going back over the eyes with some Folk Art “Color Shift ”“Emerald Flash”, and then added some Americana “Snow White” highlight dots to the eyes.
I let the figure dry overnight and the next day I gave it a coat of Americana “DuraClear Matte” varnish.    Another overnight dry, and I sprayed the figure with Testor’s Dullcote".    When the “Dullcote” was dry, I went back and redid the eyes with a little Americana “DuraClear Gloss” varnish. 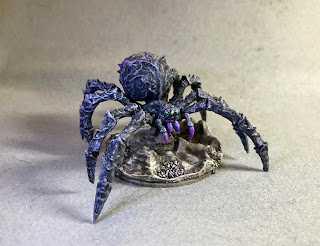 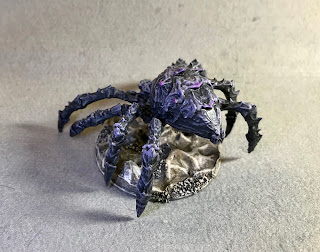 Well, I’m not terribly thrilled with the outcome.  To me the drybrush ended up looking a bit messy.  And I kept feeling like I should be doing more colors, but I felt a spider that lived in caves and rocks would generally want to blend in, and not stand out with bright colors.   Still it’s a perfectly serviceable monster, and will do just fine for the game table.