This past week I painted the “Dark Elf Queen on Throne” from the Bones 4 Darkreach Expansion, in my continuing effort to concentrate on working my way through that expansion.
I prepped the figure in the usual way, soaking the parts in a dish of water with a couple drops of dish-soap added, then giving them a light scrub with a soft toothbrush, and then rinsing and drying them.
I wanted to make the queen removable so I could use the throne both as a simple terrain piece and also with the queen in place if needed.  I decided to use a pair of rare earth magnets to facilitate this.  So, to begin with, I sliced the tab where the queen is supposed to be mounted off the throne’s seat, and then drilled a hole in both the throne’s seat, and the underside of the queen to fit the magnets.  It was handy to have the site where the tab was on the throne, and the pre-existing hole in the queen, to help align the magnet placement correctly. 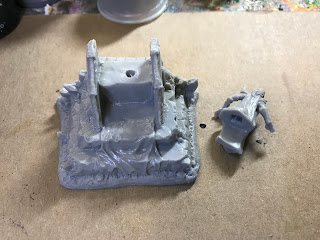 I then used Gorilla superglue gel to glue the magnets in place, being careful to get the polarity correct. 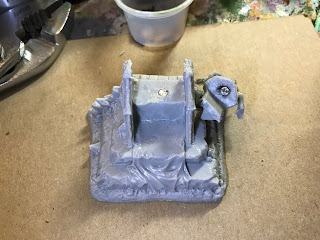 I then stuck the queen’s magnet onto an alligator clip in preparation for painting. 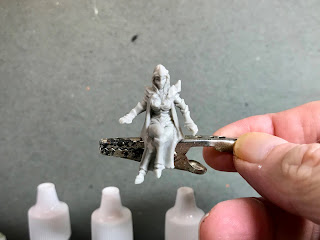 For the throne, I used the superglue gel to glue a fender washer into the recess under the seat to help provide a base that would stick to my magnetic sheet lined storage boxes.   I then glued the back piece to the throne using the superglue gel.  When dry, I glued the completed throne to the top of a pill bottle with a couple drops of Elmers white glue. 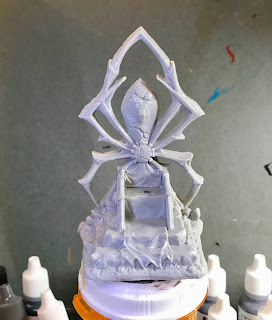 I began by painting the queen with Ceramcoat “Black”.  When dry, I drybrushed the armor with Folk Art Color Shift “Black Flash”.   When the “Black Flash” was dry,  I went over it again with a drybrush of  “Folk Art "Pure Gold”.  After that I painted the face, legs, and hands with Reaper MSP “Dark Elf Skin”. 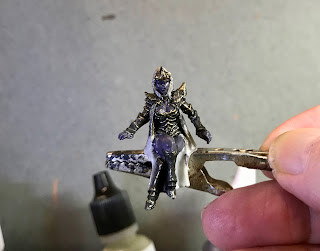 I then painted her skirt with Reaper MSP “Blood Red”, and then her cape with Crafter’s Acrylic “Purple Passion”.  After that, I painted her hair with Americana “Grey Sky”. 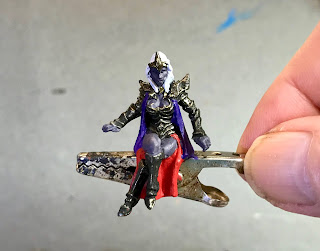 Next, I repainted her cape with Folk Art Color Shift “Purple Flash”, and then painted her boots with Reaper MSP “Coal Black”.  I than painted the edges of her cape with the “Black”, and then went over it again with the edges “Pure Gold”.
After that, I let everything dry for a while, and then gave the entire figure a coat of Citadel “Nuln Oil” wash.   Then, when the wash was dry, I painted the eyes, then highlighted the face, chest, legs and hands with the base “Dark Elf Skin”, and some Reaper MSP “Dark Elf Highlight”. 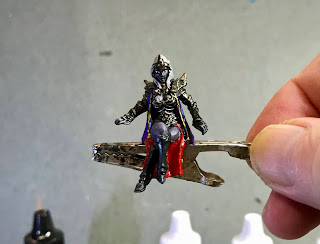 I then highlighted the skirt with the base “Blood Red” mixed with some Reaper MSP “Holly Berry”, and then further mixed in a little Crafter’s Acrylic “Daffodil Yellow” to do even lighter highlights.  I also used the “Holly Berry” and Blood Red", along with a little Americana “Snow White” to paint the gem in her crown.   After that, I mixed some of the “Purple Flash” with some  Ceramcoat “Metallic Silver” to highlight her cape.  Next, I highlighted her boots with the base “Coal Black” mixed with a little Reaper MSP “Frosty Blue”, and then I highlighted her hair with the “Snow White”.  I finished up by using some Ceramcoat “Wedding Gold” to highlight her crown, armor, and the edges of her cape.

I then began work on the throne, which I decided to paint to look like black marble.  I started by painting all the stone parts with the “Black”.   When that was dry,  I used a stiff bristled brush, running my finger across it, to spatter white paint on the throne.  I let it dry some more, and then gave it a coat of the “Nuln Oil” wash. 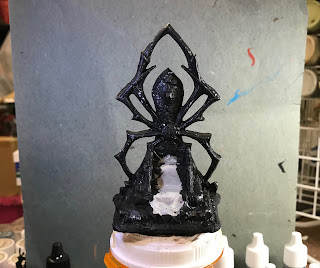 Next, I again used a stiff bristled brush, running my finger across it, to spatter white paint on the throne.  I also painted some thin lines to make striations.  After that, I tried to do some highlighting with the “Frosty Blue”.
I had deliberated on how to paint the cloth running down the seat of the throne, and had decided to try and paint it as an old ragged repurposed tapestry.  So, I looked on Google for images of tapestries, and decided on this one: 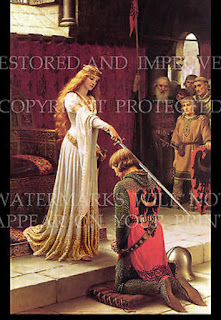 I felt I could easily adapt it to depict a Dark Elf queen executing a prisoner.  Suitable intimidation for anyone coming before the throne…
So, continuing on, I painted the cloth with Americana “Antique White” to resemble an old tapestry base material. I then penciled in the design.  This was going to be quite a challenge.  Luckily, the Queen, when seated would obscure part of it. 🙂 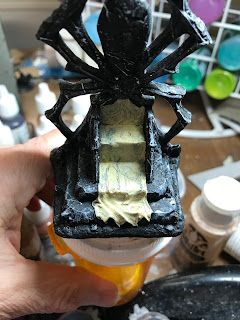 I then attempted to paint in the design.   I’m not a good artist when it comes to realistic painting,  particularly people, but I made my best effort to get a rough blocked in image.   my fingers were crossed that weathering would help make up for my lack of skill. 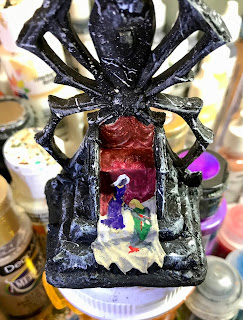 I let the throne dry for a while, and then I gave the tapestry a coat of Citadel “Agrax Earthshade” wash.  I then painted the spider motif on the back of the throne behind the queen’s head, as well as the mounts the throne gems were in, with  Folk Art Brushed Metal “Brushed Bronze”.  After that, I painted the gems with Ceramcoat “Opaque Red”, and painted the crystals on the throne’s base with the “Snow White”. 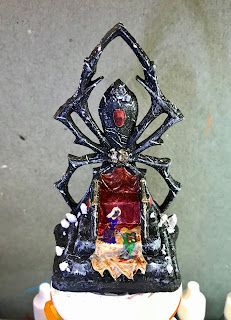 Next, I did highlights and shadows on the gems with Pathfinder MSP “Urgathoa Red” for the shadows and the “Snow White” for the highlights.    I then mixed some Citadel Technical “Spiritstone Red” and “Soulstone Blue” together to make a purple color, and used that to paint the crystals on the throne’s base; then when dry, I added highlights with the “Snow White”.  After that, I went around to all the parts I had painted with the “Brushed Bronze” and highlighted them with, first,  the “pure Gold”, and then a little of the “Wedding Gold”.
I let the throne and queen dry overnight and the next day I gave them a coat of Americana “DuraClear Matte” varnish.   Another overnight dry, and I sprayed the figure with Testor’s Dullcote".   When the “Dullcote” was dry, I went back and repainted all the gems and crystals, with a little Americana “DuraClear Gloss” varnish. 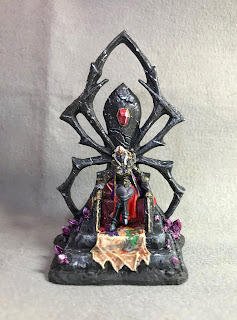 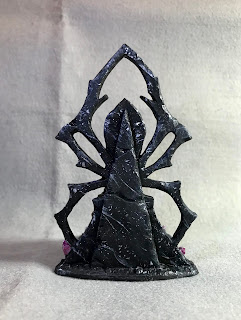 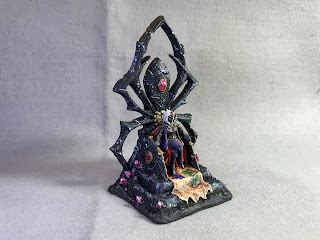 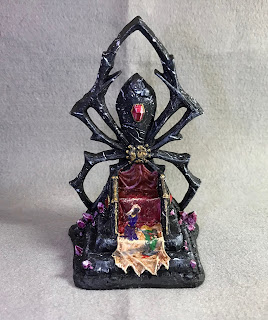 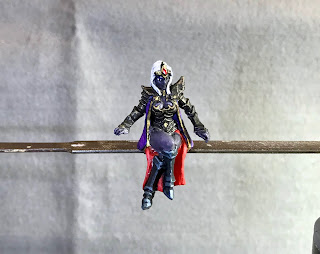 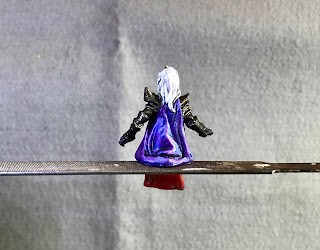 I’m very pleased with how this turned out.  It’s a little gaudy and “busy” looking, but I don’t think thats terribly out of place in a Dark Elf setting.  I think the tapestry turned out well; not great, but good enough.  All in all a pretty nice piece I think.