Back when I started this at the beginning of the year, my intention was to build up a matched set of four DBA armies that were all mutual historical opponents. I started with the Hittites and Egyptians, moved on to the Syro-Canaanites, and now, after a couple of months of work, I am done with the fourth army – the enigmatic I/28 Sea Peoples! As with the others, these are all 20mm plastic figures – in this case, mostly a mix of Caesar Miniatures Sea Peoples and Philistines. (The chariots are a mix-and-match deal – the crew are more Sea Peoples and Philistines, the vehicles themselves are borrowed from the Hittite Chariot set, but the horses are from the Mariyannu Chariot set.)
Historically, these guys are the subject of a number of debates – who were they, where did they come from, and what was their role in the Bronze Age Collapse? Whoever they were, they show up in Egyptian wall paintings, some of which show them as being quite colorfully dressed in reds, blues, and greens. The shield designs are a bit more fanciful – some of them I painted as fairly plain leather or with simple geometric designs, but I threw in a few more representational designs as well.

The army in array

The bulk of the army is unarmored “fast” Blades (3Bd) 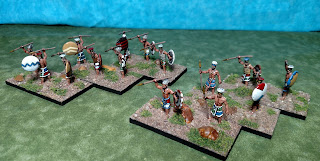 The whole army again – this time from the commander’s perspective. 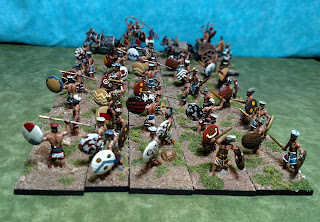 And from the side – I enjoyed letting loose on the shields for these guys.
This army has the advantage that it can also be used pretty easily for the I/29a Early Philistine list – handy if I ever paint up an ancient Hebrew army. For now, though, I’ll probably take another break from the Bronze Age to work on some other miniatures projects.