This past week I painted the “Deep Gnome Rogue”, and “Deep Gnome Captain”, from the Bones 4 Darkreach Expansion.
I prepped the figures in the usual way, soaking the parts in a dish of water with a couple drops of dish-soap added, then giving them a light scrub with a soft toothbrush, and then rinsing and drying them. I then glued them to 7/8" black-primed fender washers with Aleene’s Tacky glue.  I then glued the washers onto a tongue depressor with a couple drops of Elmer’s white glue. 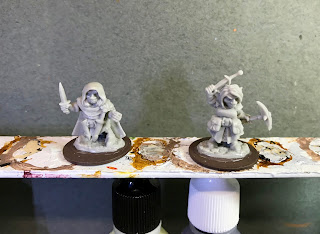 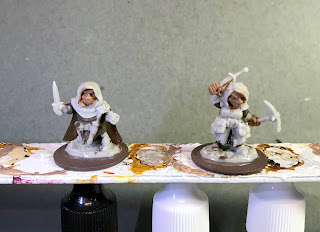 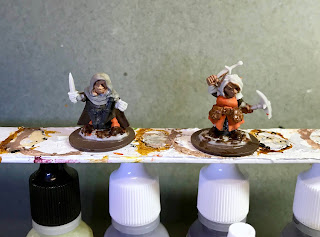 I decided at that point that I didn’t like the Rogue’s leggings being orange, so I repainted them with Accent “Mustard Seed”.  I also used the “Mustard Seed” to paint the cuffs of the Captain’s tunic.  I then painted the Rogue’s gloves, and the Captain’s scabbard and dagger grip, with Reaper MSP HD “Umber Brown”.  After that, I painted all the metal bits, weapons and armor, with Americana “Zinc”. 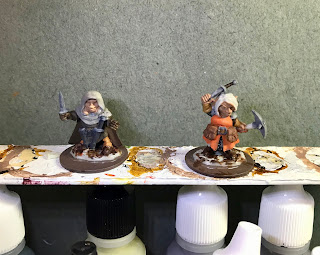 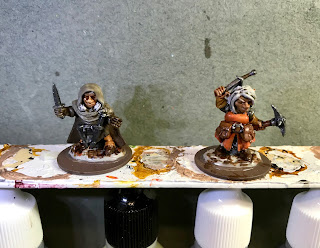 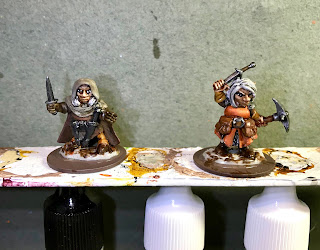 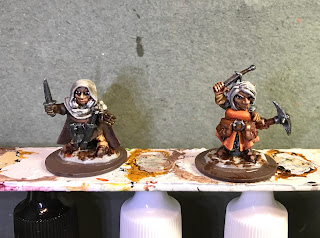 Next, I highlighted their hair with Americana “Snow White”, and then highlighted the Rogue’s scabbards and belt with Americana “Zinc”.  I then highlighted the Captain’s belt, pouches, and scabbard with Ceramcoat “Territorial Beige, followed by lighter highlights using Americana "Khaki Tan”.   After that, I highlighted their weapons armor and other metal bits with Ceramcoat “Metallic Silver”.Lastly, I painted both their  bases with Americana “Mississippi Mud”.
I let the figures dry overnight and the next day I gave them a coat of Americana “DuraClear Matte” varnish. I then used some white glue to glue some fine sand to their bases.  When the sand was dry, I painted it with a coat of Americana “Charcoal Grey”. When this was dry, I drybrushed the sand with the “Mississippi Mud”, and then with some Apple Barrel “Rock Grey”; lastly I drybrushed it with a little Americana “Dove Grey”.
Another overnight dry, and I sprayed the figures with Testor’s Dullcote". 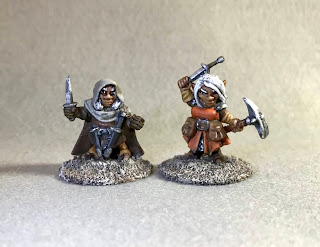 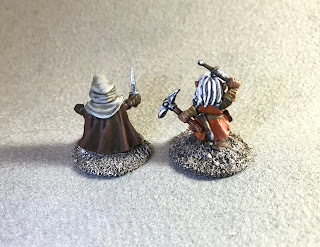 I’m really happy with this pair.  To be fair, the facial sculpts come with a ton of character, so making these two look good was an easier task.

via All Bones About It http://allbonesabout.blogspot.com/2020/07/deep-gnome-rogue-and-deep-gnome-captain.html
from Tumblr https://harfordhawks.tumblr.com/post/622898034142052352
via IFTTT