This past week I took a break from painting Dark Elves and Gnomes and did the “Goblin Bodyguard” from the Bones 4 Goblin Heroes set.  I had planned to work on all three of the Goblins from the Goblins Heroes set at the same time, as kind of side project as I worked on the Darkreach figures, so I had prepped  the figures in the usual way, soaking them in a dish of water with a couple drops of dish-soap added, then giving them a light scrub with a soft toothbrush, and then rinsing and drying them. I then glued them to 1" brown-primed fender washers with Aleene’s Tacky glue.  I then glued the washers onto a tongue depressor with a couple drops of Elmer’s white glue. 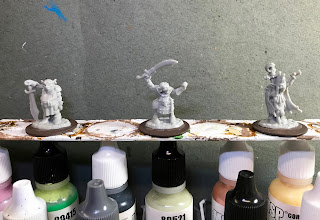 I then had begun painting all their exposed skin areas with Citadel Contrast “Snakebite Leather”.  But when I was studying them after the “Snakebite Leather” application, I realized that they really weren’t similar enough to paint as a group, and so I popped them off the tongue depressor so I could work on them separately.   I reattached the bodyguard to a pill bottle with some blue tac.  After that, I painted his loin cloth with Reaper MSP “Blood Red”, his boots with Citadel Contrast “Wyldwood”,and his gauntlets with Americana “Fawn”. 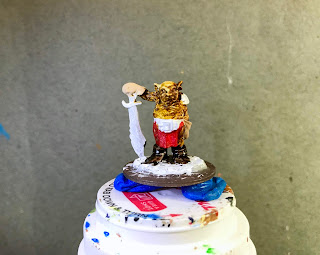 Next, I painted his belt and straps with Americana “Charcoal Grey”, and is scimitar, armor, and belt buckle with Ceramcoat “Charcoal”. I also painted his earrings with Folk Art Brushed Metal “Brushed Bronze”.   Then after everything had a chance to dry, I gave his loin cloth, belts, straps, and gauntlets all a coat of Citadel “Agrax Earthshade ” wash. 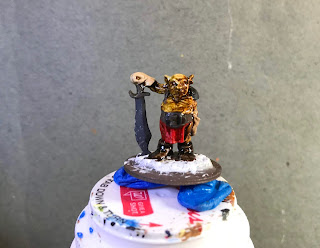 Then, when the ash was dry, I painted his eye.  After that, since I felt his skin had come out rather splotchy from using the Contrast Paint on it, I tried blending it a bit with some Accent Golden Oxide.  I then used some Apple Barrel “Maple Sugar Tan” mixed with the “Golden Oxide”. to highlight his skin. 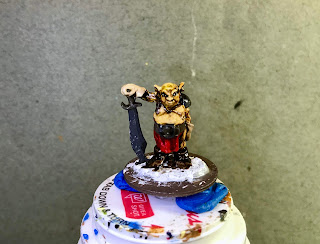 As I prepared to highlight the loin cloth, I realized I had painted part of what was supposed to be his legs as loin cloth, so I took some time to repaint his legs with the “Golden Oxide” and “Maple Sugar Tan” and blend the areas back into the body.  I then highlighted the loin cloth with a mix of the base “Blood Red” and some Reaper MSP “Golden Glow”.   After that, I highlighted his gauntlets with some of the base “Fawn” mixed with a little Americana “Bleached Sand”, and I highlighted his belt and straps with some Americana “Mississippi Mud”.
Next, I painted the scimitar, shoulder armor, and belt buckle with Folk Art Metallics “Gunmetal Grey” and then highlighted all of it with some Ceramcoat “Metallic Silver.  I then highlighted the hilt of the scimitar and his jewelry with Ceramcoat "Wedding Gold”.   Lastly, I painted his base with the “Mississippi Mud”.
I let the figure dry overnight and the next day I gave it a coat of Americana “DuraClear Matte” varnish.    Then, when  the varnish was dry, I used some white glue to flock the base.  Another overnight dry, and I sprayed it with Testor’s “Dullcote”. 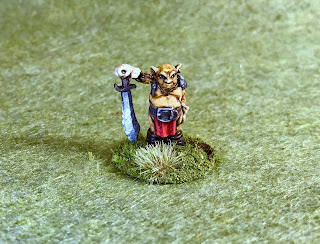 The Contrast paint really didn’t work well on these guys, but I’m generally happy with the outcome.  As with so many Reaper figures, the great character of the sculpt really carries the paint job a long way.