This past week I painted the “Deep Gnome Scout”, and “Deep Gnome Cleric”, from the Bones 4 Darkreach Expansion.  These were the last two of the Deep Gnomes from Darkreach Expansion that I had left to paint.
I prepped the figures in the usual way, soaking the parts in a dish of water with a couple drops of dish-soap added, then giving them a light scrub with a soft toothbrush, and then rinsing and drying them. I then glued them to 7/8″ brown-primed fender washers with Aleene’s Tacky glue.  I then glued the washers onto a tongue depressor with a couple drops of Elmer’s white glue.
I thought I’d try some quick brush-on zenithal priming on these guys, since they both had light sources, so I grabbed my Ceramcoat “Black”.  I studied how the light from the Scout’s lantern hit, and attempted to paint the shadow side with the “black”.    I went to do it with the Cleric figure, but realized he had a light source on both sides, so was basically fully lit. 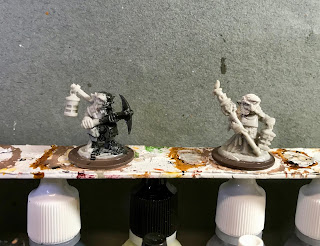 I began by painting the figures armored area with the Ceramcoat “Black”.  When the Black was dry, I drybrushed the armor with Folk Art Metallics “Gunmetal Grey”.  I then painted their heads with Americana “Sable Brown”. 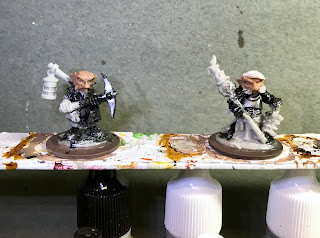 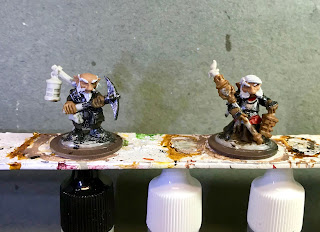 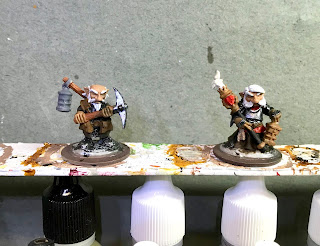 Next,  I painted the Scout’s lantern, and the Cleric’s axe head, with Folk Art Metallics “Gunmetal Grey”, and did the Cleric’s lantern and the metal bits on his candle holder with  Folk Art Brushed Metal “Brushed Bronze”.  I let the figures dry for a while. and then gave their faces and ears a coat of Citadel “Reikland Fleshshade” wash.  When that wash was dry, I gave their clothes and weapon handles a coat of Citadel “Agrax Earthshade”.  Another drying break and then I finished the washes by giving a coat of Citadel “Nuln Oil” wash to their hair, armor, and weapon heads.  When all the washes were dry, I painted their eyes, and then highlighted their skin with a mix of the base “Sable Brown”, and Americana “Fawn”. 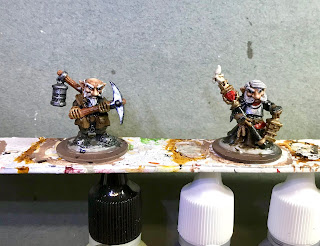 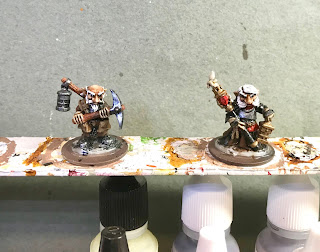 Next,   I highlighted the Cleric’s rope with the “Bleached Sand”, and highlighted all the wood handles with Reaper MSP “Tanned Shadow”.  I then highlighted the candle holder with Citadel “The Fang”, and the candle with Crafter’s Acrylic “Light Antique White”.    After that, I worked on the metals, highlighting the Cleric’s lantern, and the metal fittings on the candle holder, with DecoArt Dazzling Metallics “Bright Brass”; and highlighting the Scout’s lantern, and all the armor and weapons, with Ceramcoat “Metallic Silver”.
I then worked on the OSL, first painting the panes of the lanterns with Reaper MSP “Golden Glow”.  I then used this color to drybrush and directly paint some reflective light onto the parts of the figures where I felt the light shown most directly.  Turning back to the light panes, I painted central hot spots in each paint using the “Snow White”.  I felt they looked too washed out, and not vibrant enough, so I went back over each pane with some thinned Reaper MSP “Clear Yellow”.  I liked that better, so I repeated adding the “Snow White” hot spots.    I then painted the candle, starting with a base of the “GoldenGlow”, I then worked toward the flame tip, using first Reaper MSP “Hearth Fire”, and then Reaper MSP “Holly Berry”.  Lastly, I added highlights to the facet of the gemstone in the candle holder with a mix of the White and the some Reaper MSP “Holly Berry” .  I wrapped things up by painted both their  bases with Americana “Mississippi Mud”.

I let the figures dry overnight and the next day I gave them a coat of Americana “DuraClear Matte” varnish. I then used some white glue to glue some fine sand to their bases.  When the sand was dry, I painted it with a coat of Americana “Charcoal Grey”. When this was dry, I drybrushed the sand with the “Mississippi Mud”, and then with some Apple Barrel “Rock Grey”; lastly I drybrushed it with a little Americana “Dove Grey”.
Another overnight dry, and I sprayed the figures with Testor’s Dullcote”.  When the “Dullcote” was dry, I went back and repainted the gem with a little Americana “DuraClear Gloss” varnish. 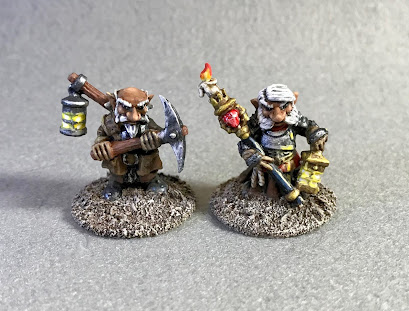 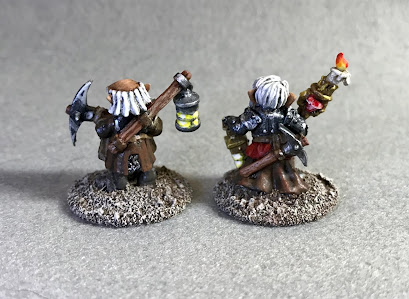 I’m really happy with how these to fellows turned out.   I’m not sure the initial attempt at a quick brush-on zenithal priming on these guys had any real effect in the end, but it was fun to try.  The OSL was quick and haphazard (I don’t have the patience to do a real serious attempt), but in the end I think it gets the idea across.

And here’s a shot of all the Bones 4 Deep Gnomes together.  I think they make a really nice group of characters. 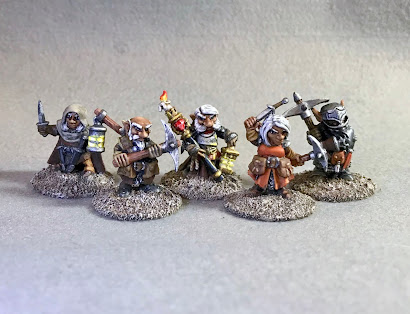