This past week I took a break from working on Darkreach and painted the “Goblin Champion” from the Bones 4 Goblin Heroes set.  I had plans of painting all three of the Goblins for the Goblins Heroes set at the same time, so I had prepped  the figures in the usual way, soaking them in a dish of water with a couple drops of dish-soap added, then giving them a light scrub with a soft toothbrush, and then rinsing and drying them. I then had glued them to 1″ brown-primed fender washers with Aleene’s Tacky glue.  I then had glued the washers onto a tongue depressor with a couple drops of Elmer’s white glue. 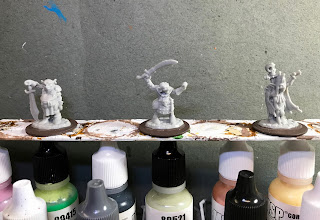 I already painted the Goblin Bodyguard from this trio recently, and as I mentioned in that article, I had began by painting all their exposed skin areas with Citadel Contrast “Snakebite Leather”.  Then, as I was studying them, I had realized  they really weren’t similar enough to paint as a group, and so I popped them off the tongue depressor.   I now had reattached the Champion to a pill bottle with some blue tac.  After that, I painted his kilt? with Pathfinder MSP “Urgathoa Red”, his boots with Citadel Contrast “Wyldwood”,and his neck piece with Americana “Antique Gold”. 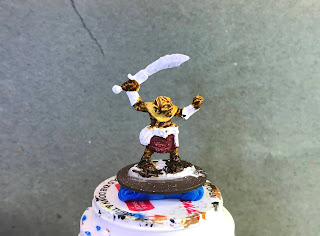 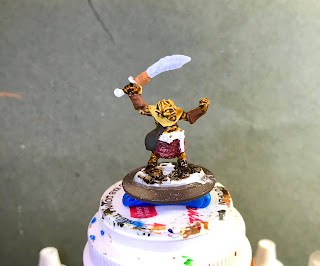 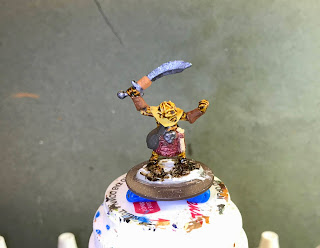 I let the figure dry for a while, and then gave all the clothing, accessories, and weapons a coat of Citadel “Agrax Earthshade” wash.  When the wash was dry,  I painted his eyes.  After that, since I felt his skin had come out rather splotchy from using the Contrast Paint on it, I tried blending it a bit with some Accent Golden Oxide.  I then used some Apple Barrel “Maple Sugar Tan” mixed with the “Golden Oxide”. to highlight his skin.      After that, I painted his hair with Cermacoat “Black”, and then highlighted it with, first, Ceramcoat “Charcoal”, and then a little Americana “Zinc”. 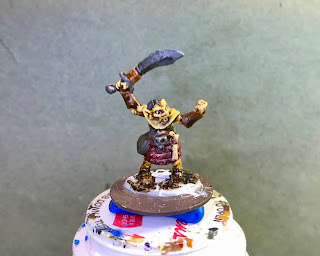 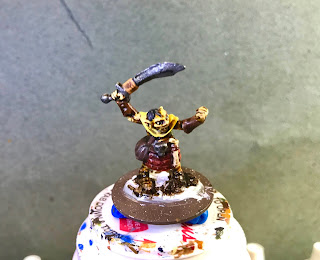 I then highlighted his belt with Ceramcoat “Territorial Beige”, and the bone hanging from it with Americana “Bleached Sand”.   Next, I highlighted his blanket roll with Americana “Jade Green”, and the ropes tying it with Americana “Khaki Tan”. I wrapped things up by highlighting his sword and belt buckle with Ceramcoat “Metallic Silver”.   Lastly, I painted his base with the “Mississippi Mud”.
I let the figure dry overnight and the next day I gave it a coat of Americana “DuraClear Matte” varnish.    Then, when  the varnish was dry, I used some white glue to flock the base.  Another overnight dry, and I sprayed it with Testor’s “Dullcote”. 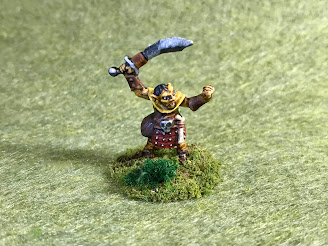 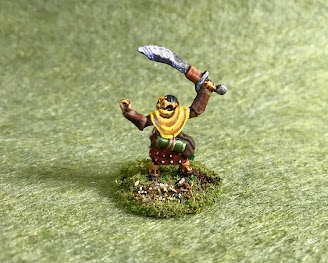 I’m happy with how this guy turned out.  I love his expression, disheveled shock of hair,  and gesture of defiance.