With the pandemic still ongoing, it hasn’t been a great year for gaming, but it has been a pretty good year for painting. I find it helpful to have a couple of projects to shift around between – this year, it’s been my 20mm Bronze Age DBA armies, and adding to my collection of Reaper Miniatures’ Bones range of fantasy figures, for use in D&D or various skirmish games. Here’s what I’ve been up to since finishing off the Sea Peoples:

First up was this warg, which I painted more or less to resemble a gray wolf. This turns out to be somewhat less gray than I expected – or at least, there are some other shades mixed in there as well. 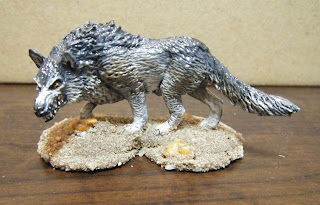 Next was this clerical-looking fellow, who ended up being a bit of a study in shades of brown. I also had some fun trying to paint the bottle at his waist to look like glass. 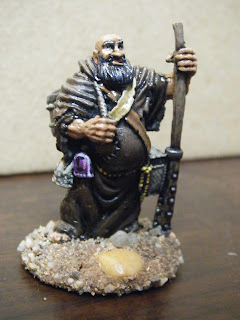 I went for a much brighter color palette with this “cultist leader” – I also tried my hand at some sort of twisty tattoo design on the side of her head, but I’m not entirely satisfied with how that came out. 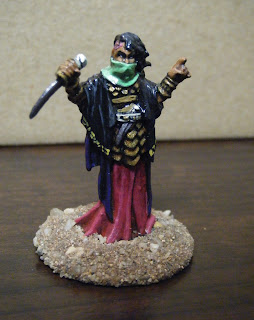 I’d had this rogue or assassin sitting around half-painted for a little while – I had started off trying some object source lighting with her daggers to make it look like they were glowing, but wasn’t pleased with how it looked, so I put her aside. Picking her up again, I was able to do a bit more with the effect, and I’m happier with where she ended up. Figuring out how the light should affect the colors of her clothing was interesting. 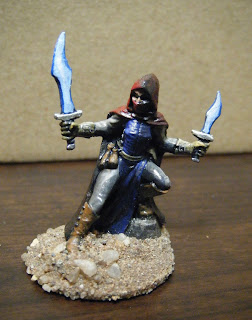 This flute-playing bard I did in a bit of a rush – at least, I think it’s supposed to be a flute. There’s also the possibility that she’s gnawing on a baguette instead. 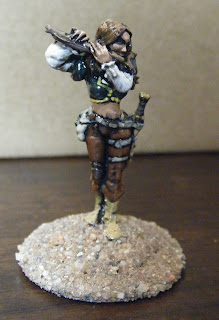 I added another three orcs to my growing warband. Unlike the previous batch, these three all required some amount of assembly, gluing various limbs in place before painting. 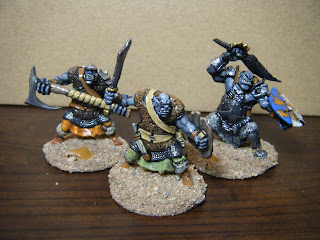 This gnomish warrior was another quick one – my dad and I decided to have a little speed-painting contest, so this one was done in an hour with a limited palette of paints. I thought the shape of her shield looked kind of like a face in profile, so I took that as a starting point. 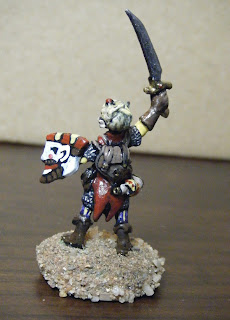 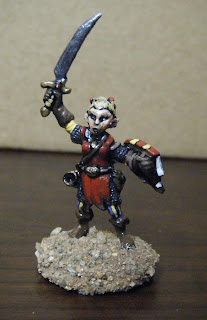 On the more formidable side, I painted a pair of yetis. Doing the white fur was an interesting change of pace from the more usual brown or shades of gray; I tried working in some yellow tones in the underlayers, but I’m not sure they really came through in the final results. 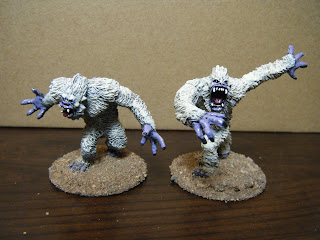 And on the less formidable side, I painted half a dozen goblins. I actually painted another set of these guys last year, with pale blue skin, but I decided to change up the colors and do these ones in pale purple instead. (Different tribes? Who knows!) I do have one more set of six around somewhere; maybe they’ll get painted green.

1 thought on “Having a fantastic time”