Alongside my fantasy figures, I’ve been working on a few miscellaneous items related to the DBA armies I’ve been building this year. The first of these is a bit of a crossover, actually – it’s a Reaper Bones miniature, their Avatar of Sekhmet, but based on a 60mm square base. For DBA, she can be used as a measurement tool to mark a unit’s threat zone. For Hordes of the Things, she can be deployed as a God, if the Egyptians are in need of a little divine aid on the battlefield. 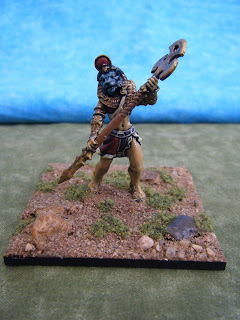 Next up are some camp followers for the armies I’ve completed. These were a fun opportunity to do some little vignettes, representing some of the people that might be tagging along in the wake of one of these armies, and featuring some of the few non-combatants I could put together. (Well, usually non-combatants – DBA does have rules for sending your camp followers out to fight.)

Here are the Egyptians. The waving woman and the man with the bag are included with the Caesar Ancient Egyptian Chariot set. The man with the jar is from the Atlantic Pharaoh’s Court set, which someone kindly gifted me at Barrage a couple of years ago. 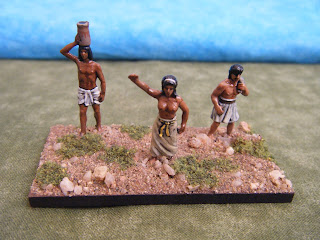 The Hittites were a little more difficult, since their garb is a little more distinctive. The woman on the left is borrowed from the Caesar Hebrews. The man in the center marching off to battle is part of the Caesar Hittite Chariot set. The woman on the right is actually a HaT figure, from their Gallic Chariot with Warrior Queen set. (This isn’t the first time I’ve put that figure to use – they’ve shown up on this blog some years ago in a rather different capacity…) 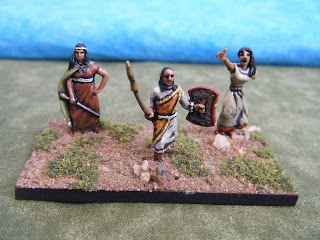 The Syro-Canaanites got a similar group to the Egyptians. The portly fellow in the center is good old Friar Tuck from the Airfix Robin Hood set, done up as a priest, merchant, or other dignitary. 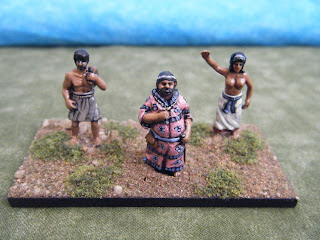 The Sea Peoples were the last ones I had an idea before, and in some ways the trickiest, but also the most fun. Here a couple of raiders are shown making off with someone’s fatted calf. (Or maybe they obtained it by legitimate means – who can be sure?) The men are from the Caesar Sea Peoples set, modified to be carrying sticks and ropes instead of swords and shields; the cow is from the Atlantic Stampede set. The most difficult part was tying the tiny lassos… 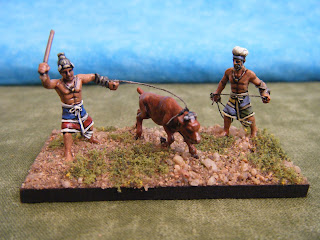 As I was going through and putting together the camp followers, I realized I had some extra Egyptian archers that were also included in the chariot set. This meant that I could do a few extra units to deploy them as the earlier I/22a list. This has a slightly different mix of infantry than the I/22b list, with additional solid bow units and fast blade units. I am still technically short one bow unit, but they have the option of switching for solid blades, which I have plenty of. 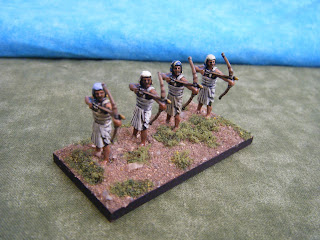 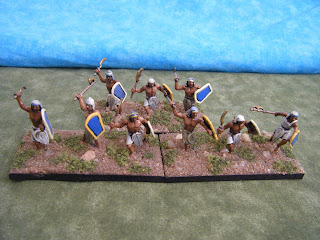 Finally, these are not directly related to the DBA armies, but are a sort of by-product. I previously had some chariots which were mounted on 40x60mm bases, rather than the 60×80 called for by the rules. Due to how these were based, I was able to salvage the original bases and use them for something else – in this case, some plastic spiders that got a quick paint job! These may pop up as Beasts or Lurkers in a Hordes of the Things game some day. 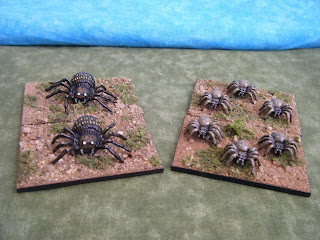