This  past week I took a break from working on Darkreach and painted the “Goblin Champion” from the Bones 4 Goblin Heroes set.  I had plans of painting all three of the Goblins for the Goblins Heroes set at the same time, so I had prepped  the figures in the usual way, soaking them in a dish of water with a couple drops of dish-soap added, then giving them a light scrub with a soft toothbrush, and then rinsing and drying them. I then had glued them to 1″ brown-primed fender washers with Aleene’s Tacky glue.  I then had glued the washers onto a tongue depressor with a couple drops of Elmer’s white glue. 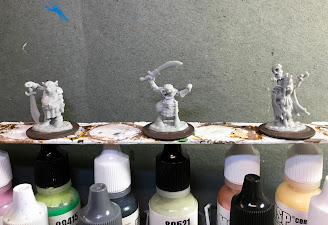 I already recently painted both the Goblin Bodyguard and Goblin Champion from this trio, and as I mentioned in those articles, I had began by painting all their exposed skin areas with Citadel Contrast “Snakebite Leather”.  Then, as I was studying them, I had realized  they really weren’t similar enough to paint as a group, and so I popped them off the tongue depressor.   I now had reattached the Shaman to a pill bottle with some blue tac.  After that, I started by painting his cape and hood with Ceramcoat “Black”.  I then painted his boots with Americana “Aspahltum” and his loincloth with Pathfinder MSP “Urgathoa Red” 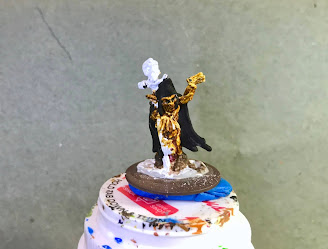 Next, I painted the spider on the back of the cape with Pathfinder MSP  “Medusa Green”. and then painted his staff with Reaper MSP HD “Rusty Red”, and the skull and cross bone on the staff, as well as the bone necklace, with with Americana “Bleached Sand”.   After that, I painted  the cord of his loin cloth, the cord of his necklace, and the binding on the staff, with Americana “Light Cinnamon”.  I followed with painting the bag tucked into his belt with Crafter’s Acrylic “Navy Blue”. 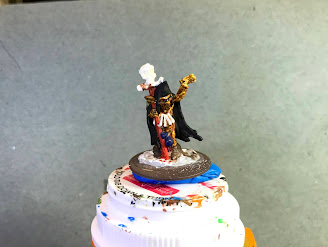 I painted the gem fittings on his hood and the skull with Folk Art Brushed Metal “Brushed Bronze”  Then I let the figure dry for a while, and then gave everything but the Goblin’s skin a coat of Citadel “Agrax Earthshade” wash.  When the wash was dry, I filled in the skull’s eye sockets and nose hole with some Citadel “Nuln Oil” wash.   I then painted his eyes, and then painted his teeth with Crafter’s Acrylic “Light Antique White”.  While I had this color out, I also used it to highlight the skull and cross bone.   After that, since I felt his skin had come out rather splotchy from using the Contrast Paint on it, I tried blending it a bit with some Accent Golden Oxide.  I then used some Apple Barrel “Maple Sugar Tan” mixed with the “Golden Oxide” to highlight his skin. 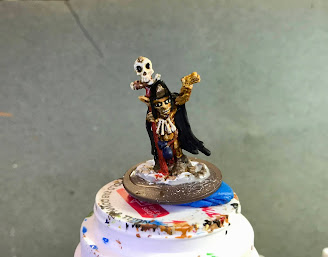 Realizing I had forgotten the bracelet on his left wrist, I painted that with Americana “Forest Green”.  I then highlighted his loin cloth with Reaper MSP Bones “Cinnamon Red”, and the staff with Crafter’s Acrylic “Pure Pumpkin”.   After that, I highlighted the bad tucked in his loin cloth with Ceramcoat “Denim Blue”, and his cape with Ceramcoat “Charcoal”.   I then added further highlights to the cape with a mix of the “Charcoal” and some Apple Barrel “Rock Grey”.   The bracelet had dried by then, so I gave it a coat of the “Agrax Earthshade” wash. 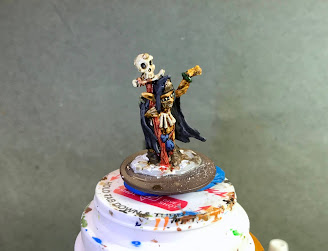 Next, I highlighted the sider on the back of the cape using Americana “Reindeer Moss Green”, and then added some eye dots.  I moved then to the bracelet and highlighted that with some Folk Art Color Shift “Emerald Flash”, and then some Folk Art Color Shift “Green Flash”.   After that, I painted the gems in the hood and skull with Reaper MSP Blood Red, the”Urgathoa Red”, and some Americana Snow White”.   I finished by highlighting the gem fittings with some Folk Art “Pure Gold”.   Lastly, I painted his base with Americana “Mississippi Mud”.
I let the figure dry overnight and the next day I gave it a coat of Americana “DuraClear Matte” varnish.    Then, when  the varnish was dry, I used some white glue to flock the base.  Another overnight dry, and I sprayed it with Testor’s “Dullcote”. When the “Dullcote” was dry, I went back and repainted the gems with a little Americana “DuraClear Gloss” varnish. 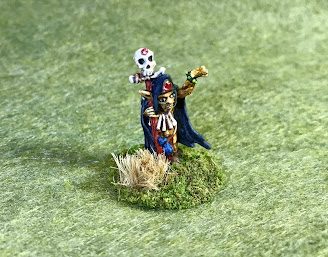 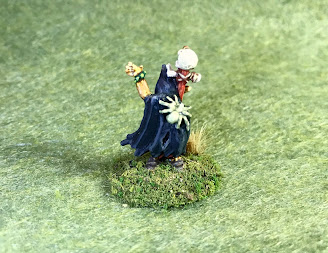 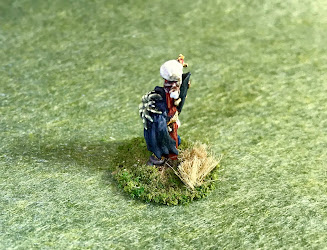 I’m generally happy with how this figure turned out.  That whole side on the left is kind of smooshed up, with the staff, hand, bone necklace, blue pouch, cape, and hood all pressed in next to each other, which made painting all that an extra challenge,  but for a tabletop figure I think it all looks okay.