This past week I painted a set of 4 of the “Maggotcrown Spearman” figures as my next step in building a 12 man unit of the Maggotcrown soldiers from the Dreadmere Expansion.   I had my original Maggotcrown soldier figures from the Kickstarter, and expanded my unit through trades and direct purchases from Reaper. Last week I painted the four Swordsman figures.
I prepped the figures in the usual way, soaking them in a dish of water with a couple drops of dish-soap added, then giving them a light scrub with a soft toothbrush, and then rinsing and drying them.   I wanted one of the Spearmen to be the Sergeant of the unit;  so I cut the top half of his spear off, drilled out his hand, and then cut down a halberd from one of the Bones 3 weapon sprues and glued it in place into the hole in his hand.  I then glued all 4 figures to 1″ brown-primed fender washers with Aleene’s Tacky glue.  I then glued the washers onto a tongue depressor with a couple drops of Elmer’s white glue. 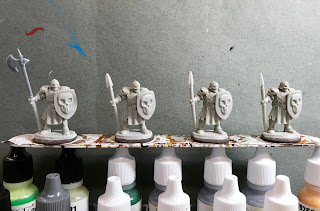 I was very pleased with the results of using Citadel Contrast “Black Templar” paint on the previous four Maggotcrown soldiers as the base for drybrushing their armor, instead of my usual solid black basecoat, so I began by giving the Spearmen all complete coats of Ceramcoat “White” to act as a base primer coat for the Contrast paint, like I did on the Swordsmen.   I then painted the armor and shields with Citadel Contrast “Black Templar”. 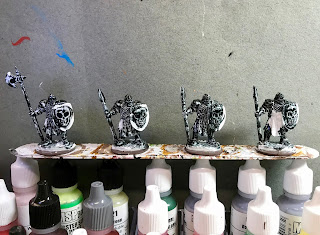 When the “Black Templar was dry, I drybrushed the armor and swords with Folk Art Metallics “Gunmetal Grey”, followed with a drybrushing of Ceramcoat “Metallic Silver”, and lastly a light drybrush with some Citadel “Mithril Silver”.   After that, I painted the tunics with Reaper MSP Pathfinder “Urgathoa Red”, and I repainted their chins with the “White”. 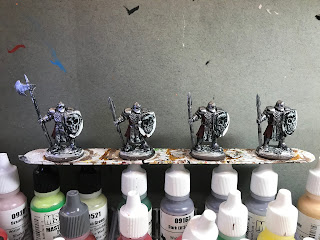 Next, I painted the tabards, and the eyes on the shield skulls with Ceramcoat “Black”; and then painted the belts, gloves, and shield straps with Reaper MSP “Coal Black”.  After that, I painted the exposed parts of their faces with Citadel Contrast “Gulliman Flesh”, and then did the faces of their shields, and the leader’s crest with Reaper MSP “Fresh Blood”.  I decided at that point that the chainmail was drybrushed too heavily and had lost its detail, so I went back over it with some Citadel “Nuln Oil” wash. 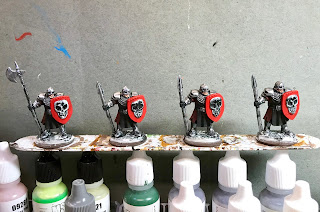 While I had the “Nuln Oil” out, I decided I also wanted to define the edges of the tabard, belts, and tunic, a little better, so I traced along the edges where the tabard and belts met the tunic using the wash.  After that, I painted the inside of the shields with some Ceramcoat “Metallic Pewter”.  I then painted the skulls on the shields with Americana “Snow White”, and the spear shafts with Americana “Charcoal Grey”. 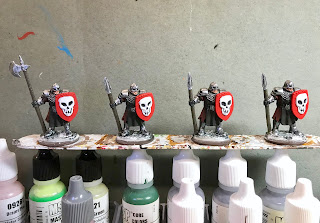 Next, I highlighted the tunics with a mix of the base “Urgathoa Red” mixed with Reaper MSP Bones “Cinnamon Red”. I then highlighted the tabards with Ceramcoat “Charcoal” followed with Americana “Zinc”; and followed that with highlighting the belts and gloves with Citadel “The Fang”.  After highlighting those parts, I highlighted the shields using Reaper MSP Holly Berry” and some Reaper MSP “Hearth Fire”.  Lastly,  I did some highlights on the spear shafts with Americana “Mississippi Mud”, and the shoulder skulls and helmets with Reaper MSP “Sparkling Snow”.  I then painted the bases with the “Mississippi Mud”.
I let the Spearmen dry overnight and the next day I gave them a coat of Americana “DuraClear Matte” varnish.    Then, when  the varnish was dry, I used some white glue to flock the bases.  Another overnight dry, and I sprayed them with Testor’s “Dullcote”. 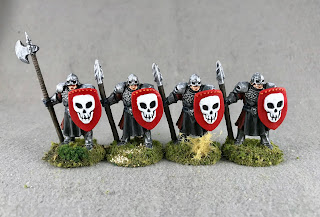 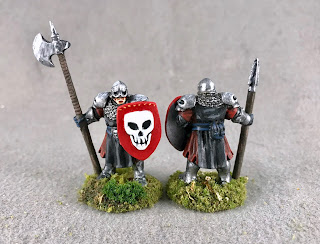 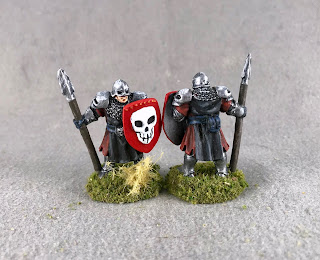 Like the Swordsmen, I’m happy with these guys; and now am really looking forward to seeing the completed unit.  Hopefully I will be able to wrap these guys up in the next week or two now that the Holidays are almost upon us, and free painting time will become scarcer.