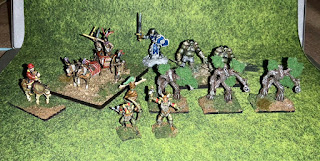 This is just a quick place holder.  November saw some painting done, though n ot what I expected, nor as much as I wanted.  I ended up working on a few things for the Portable Fantasy Game in addition to the Libyan chariot previously shown.  The Reaper “Sir Forscale” in the back row is not new this month; he’s just in for scale, as usual.

The fantasy campaign setting needs armies of orcs and elves, so I started by finishing up a couple of orc warrior samples from Caesar Miniatures.  The elves may get the tree things (more Reaper “Saprolings”) as reinforcements.

Other than that, the merchant on the mule is from a Strelets Crusader transport set, and a Celtic Warrior Queen extra is doing new duty as a green-haiored dryad.  It’s time to put on a game featuring some of these things…