Alright, so these guys are a few centuries earlier than the army in Lord Byron’s poem, but they are Assyrians nonetheless. More specifically, this is DBA army I/25a Middle Assyrians, as opponents for my various other Late Bronze Age armies. This was a much simpler matter than my previous army, as the Assyrians don’t really have any options to build out. 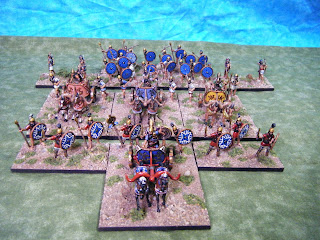 Leading the army is a Light Chariot general, backed up by three more Light Chariots. Long-time readers might recognize some of these chariots, as they were painted in a previous age, but the general is a new addition, and all four have been rebased on larger bases with supporting infantry. The chariots themselves are the trusty Caesar Mitannian Mariyannu type, but the crews and the horses are taken from the Caesar Assyrian Chariot set. (Why not just use those chariots? Well, they’re a four-horse type not really suitable for this period.) The designs on the chariots are based on Assyrian seal designs from that period, and the runners are HaT Assyrian Allied Infantry. 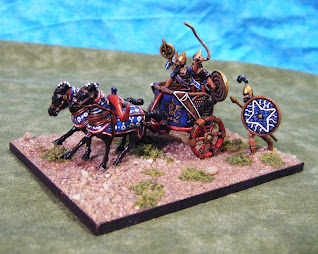 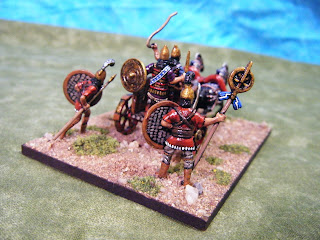 The general and his retinue 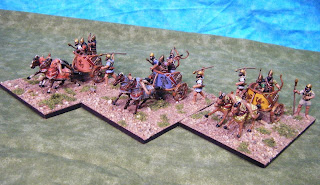 The rest of the chariot corps

The infantry portion of the I/25a list has two units of fast Blades, four Auxilia that can be either solid or fast, and two Psiloi. The figures are mostly taken from the Assyrian Allied Infantry set as well, though there are a few Robin Hood men hidden among the spearmen. As with the chariots, I decided to use these rather than the actual Assyrian infantry that are available from a couple of manufacturers, as the armor and shields of those date to a later period. To help differentiate the different troop types, since I was working with a limited number of poses, I gave the Blades red tunics, patterned shields, and helmet plumes, while the Auxilia have white or pale blue tunics, plain blue shields, and no plumes. (Side note – the proportions on some of these HaT figures are a little odd – they have rather squashed heads but very long legs. The standing spearman in particular looks like he could find a career as a ballerina…) 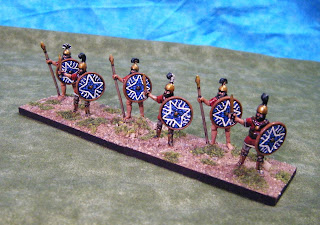 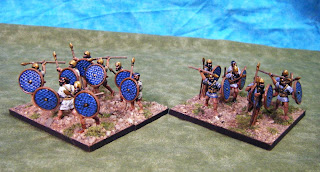 “Hupshu or sabe” infantry as Auxilia 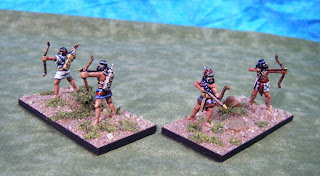 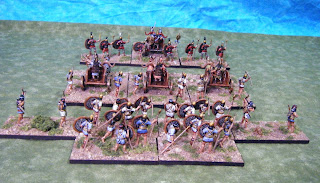 The whole army again, from the commander’s perspective

And there we have my sixth DBA army for the year! At this point I won’t claim to be done entirely (since I had originally planned to stop after four armies) but I don’t have immediate plans to build another whole army. What I may do next is rebase some more of my old chariots on the new larger bases; this might also let me piece together a Mitanni army by borrowing some troops from the Syro-Canaanites and/or Assyrians. But I think that will be a project for 2021.