It took me two weeks, but I finally finished “Arakus Landarzad, Wizard” from the Bones 4 Grey Beards set in the Core box.   I wanted this guy to serve as a wizard for a Human army I’m building for an under-development set of Fantasy rules called “Wars of Orcs and Dwarves”, based on the recently published “Wars of Ozz” ruleset. The army I’m building is generally yellow-themed in color scheme, so I wanted this guy to be yellow too.

I prepped the figure in the usual way, soaking it in a dish of water with a couple drops of dish-soap added, then giving it a light scrub with a soft toothbrush, and then rinsing and drying it.  I then glued the figure to a brown-primed 1.5″ fender washer with Aleene’s Tacky glue.  I then placed the figure in my painting grip. 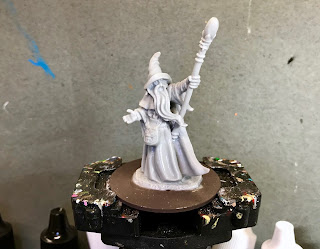 Since the units for the army have a yellow, grey and black color scheme, I wanted to do something similar for the wizard.   I began by painting his face and hands with Reaper MSP “Tanned Skin”.  I then painted his robes and hat with Americana “Primary Yellow”, and his under-sleeves with Ceramcoat “Territorial Beige” 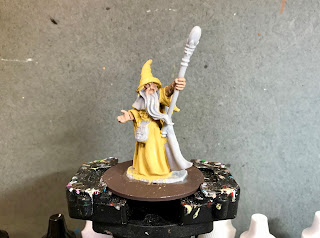 Next, I painted his cloak with Reaper MSP “Dark Elf Skin”, and then his belt with Accent “Real Umber”.  After that, I painted his pouch with Americana “Asphaltum”,  his staff with Ceramcoat “Black, and his beard with Apple Barrel “Burnt Sienna”. 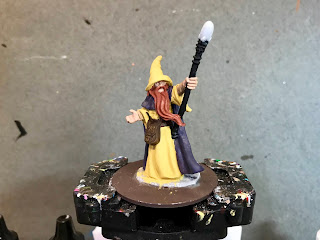 I then let everything dry for a bit, and when I returned I gave his face, hands, and beard a coat of Citadel “Reikland Fleshshade” wash.  I followed with giving his under-sleeves, belt, and pouch a coat of “Agrax Earthshade” wash.  I had read somewhere about using purple as a shadow for yellows, and how good it looked; so I wanted to try that with this guy.  So, I mixed some of the base “Primary Yellow” with some Crafter’s Acrylic “African Violet”, and painted his the recessed shadow areas of his robes and hat. 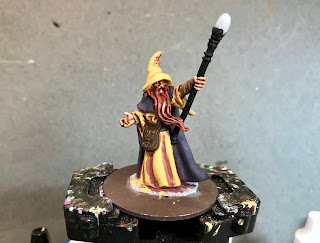 Next, I painted the eyes and then highlighted the face and hands with the base “Tanned Skin”, and Reaper MSP “Tanned Highlight”.  I then worked on highlighting the robes using the base “Primary Yellow” mixed with varying degrees of Crafter’s Acrylic Daffodil Yellow”.  I ended up having to use a little of the “African Violet” as well to blend into the shadows properly. In retrospect,  I should have just done the whole robes this way to begin with.  I know some folks like to do the mid-tones, then paint the shadows then the highlights, and I even do it this way when I use the citadel washes; but doing it with straight blending was difficult, since in doing the highlights now, I ended up having to redo the mid-tones anyway in order to transition properly into the highlights.  Anyhow it was a good learning experience.  Afterwards, I worked on the cape, highlighting that with the base “Dark Elf Skin”, mixed with a little “Reaper MSP “Dark Elf Highlight”, and for the lightest highlights I mixed in some Americana “Dove Grey”. 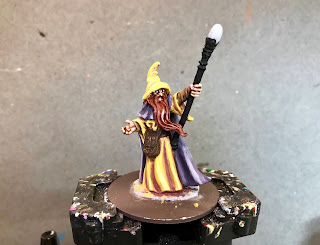 Next, I wanted to try an experiment with the gem in his staff, and attempt to use Citadel Contrast paint to achieve a gem effect.  So, I painted the gem with Citadel Contrast “Iyanden Yellow”, and then set the painting grip so it was inverted and balanced between two craft paint bottles, with the figure hanging upside down.  I hoped this would cause the contrast paint to pool at the top of the gem.  When the “Iyanden Yellow” dried, I had the darker top on the gem I wanted, but the I felt the bottom of the gem had not gotten light enough and was still a mid-tone yellow that I thought wasn’t right.  So I mixed a little of the “Primary Yellow” with some Ceramcoat “White”, and attempted to blend some highlights into the lower part of the gem.  When I was happy with the effect, I added some highlight light spots to the gem with the plain “White.”
I also decided the staff needed some more bling, so painted the gem fitting and rings with Folk Art “Pure Gold”.    I realized at that point that I had forgotten the wizard’s little frog familiar, so I painted him quickly with some Citadel Contrast “Militarum Green”, and when dry, painted his underbelly with some of the “White”.  I then added some tiny black eyes, and gave each a tiny white highlight dot. Lastly, I painted his base with Americana “Mississippi Mud”.
I let the figure dry overnight and the next day I gave it a coat of Americana “DuraClear Matte” varnish.    Then, when  the varnish was dry, I used some white glue to flock the base.  Another overnight dry, and I sprayed it with Testor’s “Dullcote”. When the “Dullcote” was dry, I went back and repainted the gem and frog with a little Americana “DuraClear Gloss” varnish. 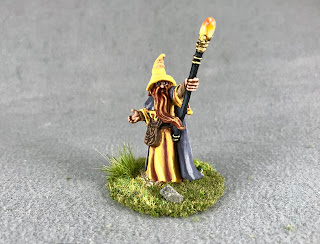 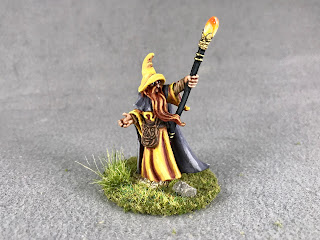 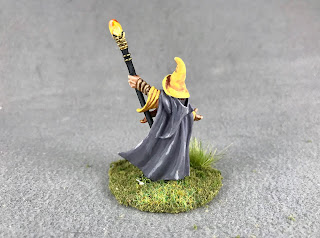 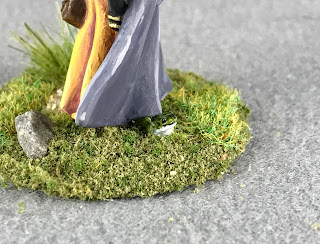 In general I am quite pleased with how this fellow came out.  I like the purple shadows in the robes; I think that looks good.  And I think using the Contrast Paint for the gem turned out much better than I had even thought it would!  The highlights on the cloak aren’t great, but I had given a lot to working on the robes when I did those, and just wanted to get the cloak done so I could move on to playing with the gem.  🙂