Back when the Bones 4 Kickstarter was running, when the Giant Rhinoceros Beetle was revealed in the Fan Favorites set, someone posted this photo of a Frog riding a Beetle to the Reaper Forum’s “Bones 4 Kickstarter” Thread.   I knew immediately then it was a conversion I would eventually want to try.   I have an extensive Frog Army, and I wanted such a figure to be a Leader or Hero for my forces.  Well, I finally decided last December was the time, as I decided I wanted to make a pair of these; one to give a friend who also has a Frog Army, and one for myself.   I completed the gift one last year, and sent that off for Christmas, and the recipient was very pleased with it.  It was now time to work on mine. 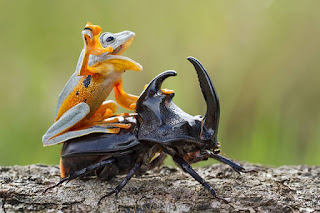 I had the pieces I needed at hand; the Bones Black “Giant Rhinoceros Beetle” from the Kickstarter, and my rider – for which I  had decided to use the Bones “Mudcroak” Squog figure.
As I looked at Mudcroak, I knew I would have to separate him from his base, but I also knew there was no way I could remove all his thin feet and little toes from the base without damaging them.  I also knew it would be very hard to conform  a figure that was sculpted to sit flat, to mount correctly onto the curved back of the beetle. So, right off the bat I made the decision to just remove his feet along with the base, with the plan that I would then resculpt them with greenstuff directly onto the beetle’s back once I had the frog glued in place. 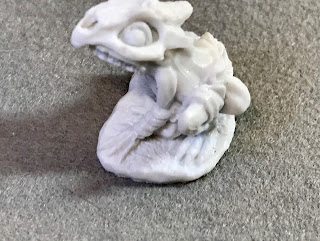 Here’s a test fit I did, with the frog held in place with blue-tac. 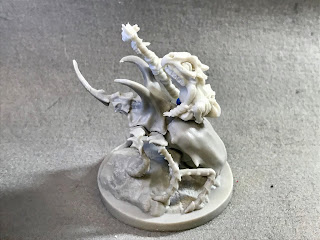 After I removed the base from the frog figure, the next step was to  attach him to the back of the beetle. I first drilled small holes into the frog and beetle and inserted a small section of paperclip to act as pin to help hold the two together.    You can see in the photo below where I tried to carve the underside of the frog a little to help it conform more to the beetle’s curved back.  I had to be careful, as I did’t want to carve away too much of the frog’s body. 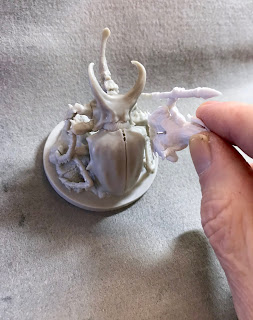 Next, I trimmed down the integral base of the beetle, as I felt it stood too high.  I mount my figures on fender washers and use magnetic storage, so really didn’t need the extra height that this base had. 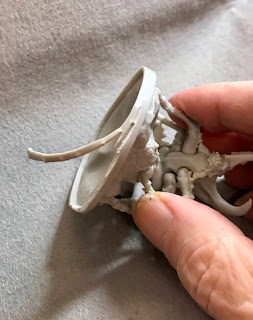 I then glued the frog to the beetle’s back, and the base to a black-primed 2″ washer, using Gorilla Superglue gel for both; and clamped the base while the glue set. 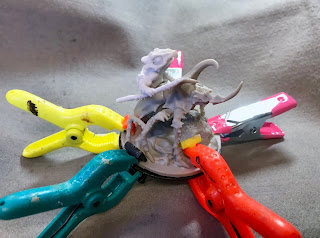 Next, I began the initial greenstuff work on the figure, and added on the base pads of the feet, the left hand which I had had to remove, and I extended the loin cloth in the back.  I’m not a sculptor by any means, but felt frog feet were in my ability level. 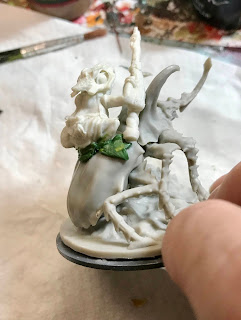 I then added the toe ridges to the back feet, and did the final connections to connect the feet and hand to their respective limbs.   I also gave the spear a bigger point, as the existing one was too small. 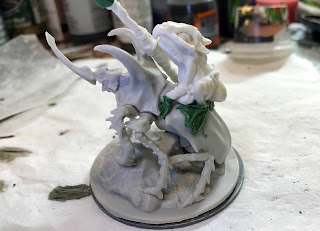 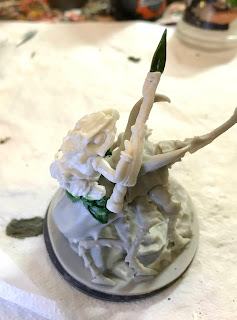 At this point,  I think it’s ready to paint.   So tune in next week to see the finished product!