This past week I painted the “Werebear” from the Bones 3 Lycanthropes set, and the “Cave Bear” from he Bones 4 Lost Valley Expansion.   I want to make a unit of War-Bears for a fantasy army I’m building, (See: Arakus Landarzad), and thought a selection of the Reaper bear figures would fit the bill.  I chose the Werebear to be the leader of the unit; similar to Beorn, the man who could change into a bear as depicted in the Hobbit.  The Cave Bear would just serve as one of the rank and file in the unit.  My plan was to mount these with 2 figures on a 2″x2″ base.
I prepped the figures in the usual way, soaking them in a dish of water with a couple drops of dish-soap added, then giving them a light scrub with a soft toothbrush, and then rinsing and drying them.  I then put the Werebear directly into my painting grip, and used some blue-tac to attach the Cave Bear to a pill bottle. 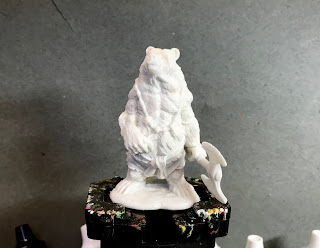 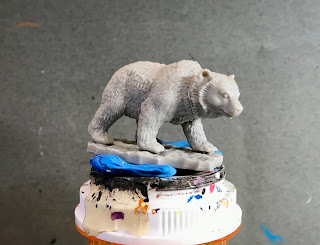 I painted these two figures basically the exact same way, so I will only show the Werebear in the step-by-step photos.  I wanted to make them look kind of like grizzly bears, so I googled some images to give myself some inspiration of the coloration.
I began by painting the bears entirely with Ceramcoat “Territorial Beige”.  I then immediately painted the forearms and lower legs with Americana “Charcoal Grey”, blending it in with the still-wet “Territorial Beige”. I then painted the claws with Americana “Dark Chocolate”.  After that, I painted his under-shorts with Folk Art “Dapple Gray”, his over-shorts with Ceramcoat “Denim Blue”, and his sash with accent “Mustard Seed”. 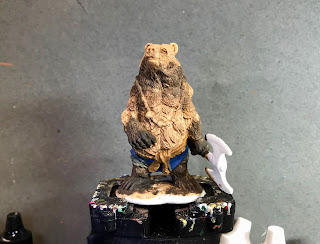 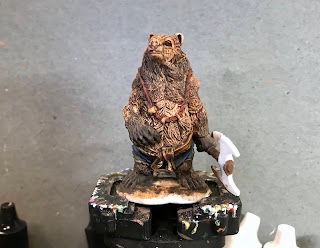 When the wash was dry,   I drybrushed the dark areas of fur with Folk Art “Teddy Bear Brown”.  I then drybrushed the rest of the fur with first, Raper MSP “Ginger Cookie”, and then a little Americana “Bleached Sand”.  Next, I highlighted the under-shorts with a mix of the base “Dapple Gray”, and some Folk Art “Gray Green”.   After that, I highlighted the over-shorts with a mix of the base “Denim Blue’ with some Apple Barrel “Apple Scotch Blue”. 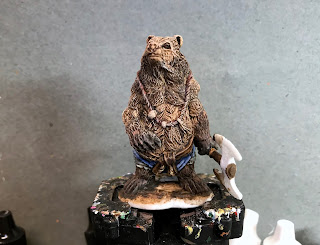 I then highlighted the sash with Americana “Antique Gold”, and a little Crafter’s Acrylic “Daffodil Yellow”.  Next, I painted one feather on his necklace with Ceramcoat “Black” and the other with Americana “Grey Sky”.  After that, I painted one of the beads with Reaper MSP “Ultramarine Blue”, the other with Pathfinder MSP Urgathea Red”, and the fringe decoration with Apple Barrel “Burnt Sienna”. 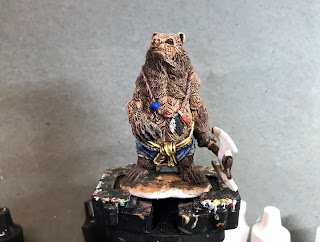 Next, I highlighted the axe handle with Folk Art “Barn Wood”, and the wrap on the axe handle with Reaper MSP “Bronzed Highlight”.  I then painted the axe head with Americana “Zinc” and highlighted the belt with Folk Art “Butter Pecan”.   I followed that with touching up the necklace cord with the “Auburn Shadow” where the fur drybrushing had gotten on it, and afterwards highlighted it with Americana “Shading Flesh”. After that, I highlighted the blue bead with Reaper MSP Bones “Tropical Blue”, and the red bead with Reaper MSP “Blood Red”.  I then highlighted the black feather with some of the “Apple Scotch Blue”, the white feather with Ceramcoat “Snow White”, and the tassel with Ceramcoat “Maple Sugar Tan”.
I then painted the nose and eyes with the “Black”, and gave the nose highlights with the “Grey Sky” and the eyes highlights with the “Snow White”.     Afterwards, I painted the axe head with  Folk Art Metallic “Gunmetal Gray” and then the clasp holding the tassel on the necklace with Folk Art Brushed Metal “Brushed Bronze”.  I then applied a coat of Citadel “Nuln Oil” wash to the center pattern of the axe head.  When dry, I went back and highlighted the axe head with Ceramcoat “Metallic Silver”, and the tassel clasp with Folk Art Metallic “Pure Gold”.   Lastly, I painted the figure’s base with the “Mississippi Mud”.
I let the figure dry overnight and the next day I gave it a coat of Americana “DuraClear Matte” varnish. My plan had been to mount these two figures side-by-side on a 2″x2″ base, and I had just assumed they would both fit.  I had a bit of set back though when I test fitted them, as the figures’ bases were too large, and the feet not placed well to even consider trimming the bases down.  So I made the decision to change to a 1-figure per base unit, as that seemed to be my only choice.
I then glued each figures to a brown-primed 2″x2″ steel base and when dry, used some white glue to flock the base.  I let them dry overnight, and sprayed them with Testor’s “Dullcote”the next day. 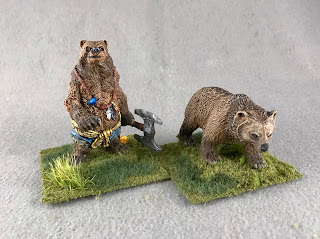 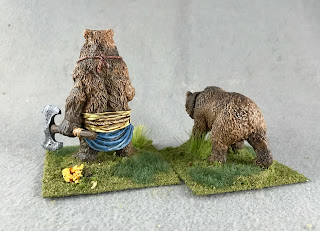 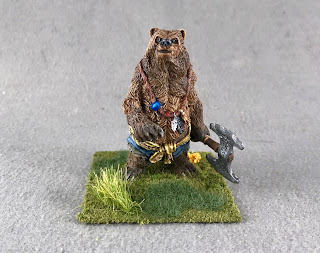 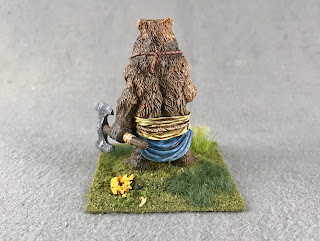 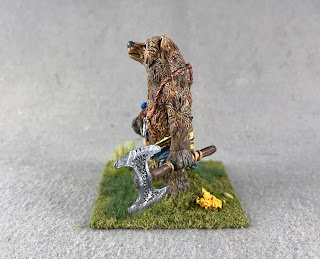 I’m really happy with how these guys turned out.  The fur on both is really sculpted well to take advantage of drybrushing.  And in the end, I think they are big enough to not look too lonely mounted individually on their bases.  I now have 3 more to paint to complete a unit of 5 bases