With last weekend’s painting, I finally had enough newly completed Prince August figures to run a little solo skirmish with A Song of Blades and Heroes (SBH). SBH recommends a typical game of 300 to 500 points.  I have noticed previously that the point system doesn’t seem to be as finely balanced as the carefully calibrated two-significant-figure point values would suggest, but, there’s a lot of randomness in the game, and it was going to be a solo game anyway.

One warband consisted of orcs and friends (an orc leader, three orc warriors, a troll, two goblin wolf riders, and a spare goblin warrior).  The other was all human (a leader, two warriors, two archers, an apprentice magician, and a cavalryman), and I managed to finesse them so that each was exactly 300 points. 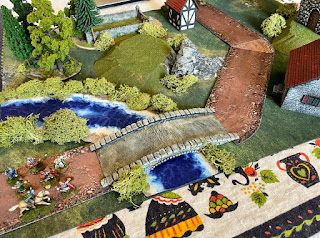 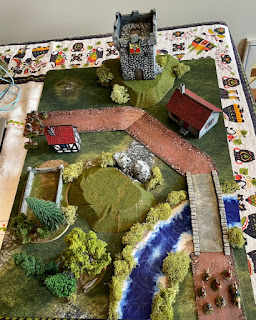 I set up a battlefield on my dining room table, using a “Kill Team-sized” neoprene matte (22×30”). The road and river are also neoprene pieces.  The road predates the pandemic, and the river was purchased just as everything was locking down.  The three-dimensional elements of the terrain are all pieces that have been completed in the last year, as were the troops.  So this game finally closes out this little digression, by having been created (almost; roads excepted) since the lockdowns started.

Upon looking over the table, a scenario suggested itself. The humans simply need to cross the table, unlock the tower, and get inside.  Had this been properly planned as a narrative battle, I would have given everything names, but, after months of delay, I got a bit impatient and just played… 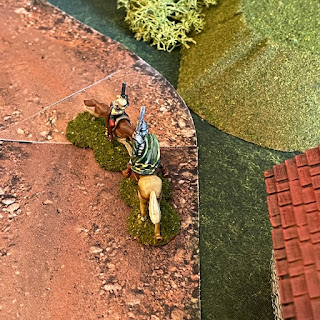 The horseman rides out ahead to scuffle with a wolf rider

Initiative in SBH is handled on a “push your luck” system of choosing to roll dice for 1, 2, or 3 actions per figure.  Failing two rolls will hand the turn over to the opponent, until they have activated each of their figures, or hand it back after two failures.  Since you need actions to get anything done, you can’t be too cautious, but it also means that your turn has a tendency to end at some unpredictable time, and, not infrequently, when some figure is in a desperate situation.  The uncertainty makes it a decent solo game without further modification, since it’s pretty easy to swap hats and be able to see what the most desperate situation is, or the one with the greatest opportunity.
The skirmish began with each side sending out their fast-moving mounted troops, to see what the situation was.  On the human side, the archers were also pushed forward to provide some covering fire.  This proved to be entirely ineffective this game; no orc fell to a human arrow.

The horseman quickly found himself embroiled in combat with half of the orcs, a situation which was bound to end badly for him sooner or later. (And did…) 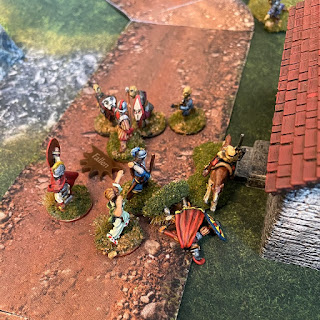 Following the death of the horsemen a wolf rider scored a lucky kill against a human
The sorceress approached the combat guarded by the two warriors, but one was forced to hold off several orcs, and the other fell in an attempt to protect her from a wolf rider. As seen above, one of the archers was forced to abandon his futile attempt to shoot something and to leap in to protect the sorceress with his sword. 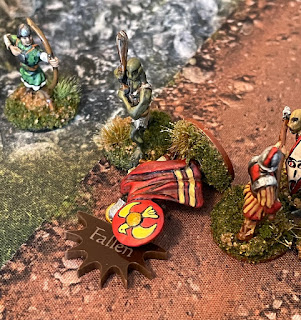 The human leader falls to the troll
As the initiative passed back and forth unpredictably, the human leader jumped into the combat in an attempt to save the warrior outnumbered by the orcs.  Unfortunately for him, he found himself facing the ferocious troll.  While the Prince August troll is not particularly impressive as a casting, in the game is is big and tough, and made short work of the unfortunate leader.  Disheartened by the fall of their leader, the humans all attempted to run, with the surviving warrior cut down as he attemtped to flee combat. 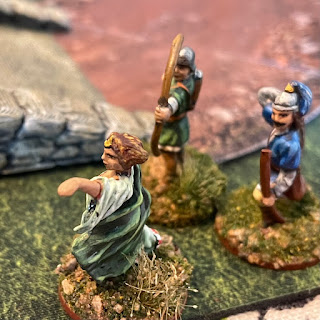 The sorceress and the two archers were able to flee the field, hoping to find their way back to other friends, and await a more favorable day. 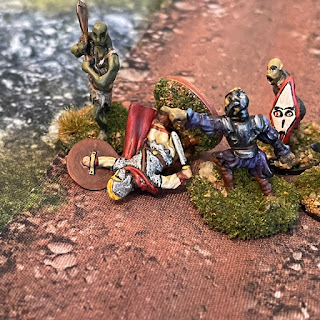 The orcs, meanwhile, were able to obtain the key to the tower from the fallen leader, decisively winning the day.  Did they loot the tower and depart, or choose to occupy it as a base for future operations?  That is a scenario for a different day, perhaps…

So, all in all, the game played out in 45 minutes.  Had I had an actual opponent it probably would have taken a little longer, perhaps an hour.  All in all, it was a satisfying little encounter, and I will look for an opportunity to use these rules again, both solo and with an opponent.
Vaccination is still in the future, so this may not be the last solo game before this is all over, but it does conclude my little self-imposed quest to create a game from scratch.  Had I not had a couple of long gaps of not painting, and of working on other projects, I probably could have gotten this knocked together in two to three months’ worth of weekends.