Things might be simpler if I had just one period of history (or type of fantasy) which interested me for gaming, but, for better or for worse, this is not the case.  So, like the fellow in the title, I’m off in all directions this week.

I have been experiencing a fair amount of pandemic fatigue recently, and have gotten behind on keeping up with the rest of the wargaming blogosphere.  Last month, however, Ross Macfarlane caught my attention with a few posts on Russian semi-flat figures.  I poked around the web a little to see what sort of background information there was on the history of these figures.  I like German flat zinnfiguren, even if I find them to be very difficult to paint, and I liked the look of these Soviet-era figures.  I probably would have left it at that, but shortly after that, the Michigan Toy Soldier Company (MTS) had an article discussing the work of a new Russian designer in a similar style.  The Warriors and Battles line includes a wide array of non-combatants, so my mind immediately went to some sort of roleplaying game, rather than a straight up wargame.  In any case, I couldn’t resist buying some samples. 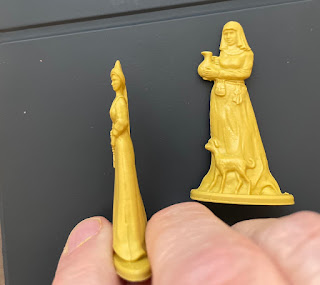 Individuals are in a resin material 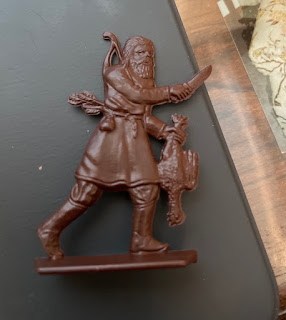 Figures from group packages are in the usual toy soldier plastic

I am an old enough wargamer that I have been caught unprepared by the sudden unavailability of figures more than a few times.  From these experiences, I have developed a general rule.  If I can’t buy enough figures to stage some sort of game with the first purchase, don’t buy anything. With figures being imported from Russia (i.e. chancy supply chain) and the possibility that the appeal was a little speciaized, I concluded that this was definitely a time to follow that rule, and ordered a box with 8 SKUs—three knights with retinues, a group of peasants, a group of bandits, a pack of wolves, and a pair of individual ladies. MTS shipped it promptly, and I was very pleased with the figures once they had arrived.

I told myself that I was going to be good and try painting some of the figures before ordering more.  I discovered that the soft plastic would hold the usual primers that I have been using on 1/72 scale figures, and that the resin could be primed with a Krylon primer advertised as being suitable for use on plastic.

The figures are pretty flat; with the soft plastic ones being even thinner than the resin lady shown above, but the sculpting nevertheless has enough texture to make shading a relatively straightforward matter. I found them to be fun and relaxing to paint, enough so that I ended up spending three hours at the desk painting the two samples, and needed a good stretch when I was done. 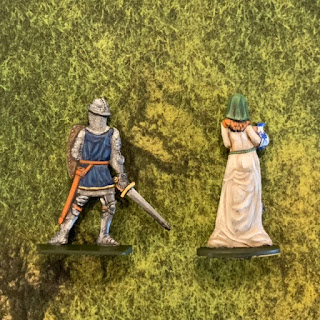 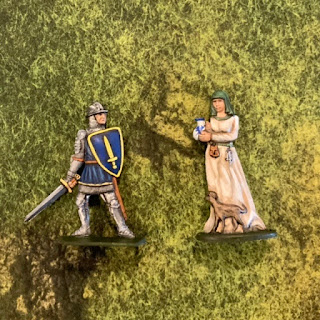 I was pleased with how they came out, and have set up five more and primed them.

I haven’t quite decided how I am going to base them.  They are quite light, and I can imagine them easily being knock over at a convention by the wind, or fans, or passing attendees, so I am thinking that they will end up with rectangular steel bases to give them just a bit of heft.

While I was not looking for a new project, especially not another individually-based medieval project, here we are…