I don’t know how the rest of you think about this, but I have my miniatures divided up conceptually into “projects”, which is my term for a batch of miniatures that “go” together.  This is usually a combination of period (e.g., Late Bronze Age, Hundred Years War, Renaissance, Fantasy) to include various IPs (e.g. Buck Rogers, Burrows and Badgers) and scale (e.g. 1/72, small 25mm, heroic 25/28/30/32mm, 40mm).  For each project, I usually have a baseline rules set that I am using or planning to use.  Some projects have multiple sets of rules. Usually figures are based consistently, but projects intended to support multiple different styles of rules sometimes end up with a mix of basing.  My old school 25mm fantasy is probably the worst offender in this category, with a mix of 60mm squares with 4-8 foot figures for mass battles, individually mounted vintage figures generally on 25mm wooden bases with flexible steel underlayers, and figures mounted on steel washers (generally 1” or 0.75”). I have 60mm square magnetic movement bases to allow the individuals to be grouped for easier participation in mass battle games.

I belong to a wargames club, the HAWKs, that specializes in historical miniatures wargaming, although we all play a broader range of tabletop games in our personal capacities.  Because of the commitment to miniatures,  though, we sometimes have a need for something that can be set up quickly, especially for times when (in the Before Times) we had an unexpectedly large number of players show up for a club night, or for when it’s too quiet at a convention.  We have evolved the Battle in a Box format to address that need, as described in the write up for a contest we ran for producing interesting BiaBs. The ideal BiaB is one that has its own scenery and the rest of the support gear (dice, rules, rules, handouts), and can sit quietly on a shelf waiting to be grabbed on the way out the door to a club meeting or convention.

So, what’s the difference between our established Battle in a Box and the Limited Environment that I am thinking about?

I am thinking of the Limited Environment as something that would be portable, and support several different play styles; ideally these would include role playing games using miniatures, skirmish games (1:1 small unit actions), mass battle games, and wargames campaigns (i.e. map games with armies and politics with the potential to generate tabletop battles). It would be “limited” in the sense that anything that would cause you to lay down a mat and a bunch of miniatures would be capable of being represented in miniatures, so that your armies will not have horse archers if no horse archer models are available, and your role playing characters are going to encounter wolves if that’s what you have models for.  I tend to believe that art (and miniatures games are a form of performance art) is better for limitations anyway.

Since this is just for my own purposes, and not designed to meet any external criteria such as those provided by the Battle in a Box Contest, the question of just how portable in needs to be can be answered with some flexibility.  My Portable Fantasy Campaign currently resides in 1 12-liter Really Useful Box, 3 6-liter Boxes, and 1 2.5-liter Box.  I have tested this out; the 12, the 2.5, and ONE 6-liter Box can be banded together into a lightweight package which will fit (as seen below) in the overhead compartment on a typical commercial airliner. (I’m guessing this was a Southwest 737, since it was on the way to GenCon a couple of years ago).  For a road trip, all three 6-liter boxes are still manageable. 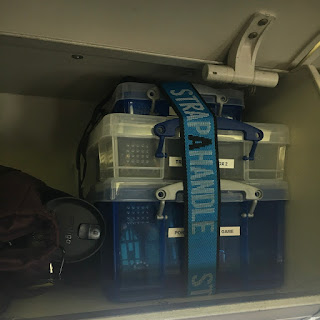 So, with a fairly comprehensive Limited Environment already in hand, why start another?  Because it’s there? That’s probably the real answer, but I also do like my games to attract attention at a convention, and 54mm, even if flat (or maybe especially if flat) are easier to see than the 1/72s…