In addition to digging out my original Dungeons & Dragons for my birthday last week, I also took the opportunity to haul all of the 25mm fantasy boxes (of painted figures, that is) up from the basement.  I needed to return the last set of troops sorted out for a batle to their proper storage locations, and I also wanted to conduct a quick census, since I was pretty sure that my estimate of numbers in my running project diary was off.  (I had somewhat over 1600, by the way, rather than the 900 I had estimated—so I hadn’t caught up in a while.)

In the course of that, I took a look at all of the Minifigs ME figures I have painted so far, and decided that I was ready to get back to that project.

The family gamers have been meeting for a group discussion, and sometimes a painting session, on Saturday afternoons for a while. Painting seemed like a good idea yesterday, so I dug around in my supply of figures already primed, and came up with some ME hobbits that had been awaiting attention for a while.  As noted in the title, these would have been the first purpose-cast hobbit figures released, back in the dawn of fantasy miniature production. 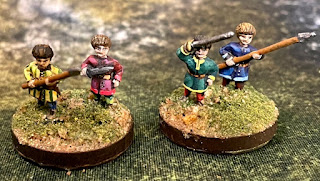 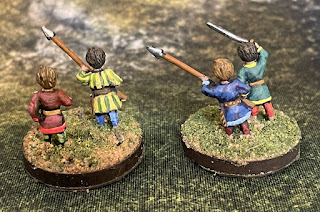 I have lost provenance on these, but I think that they are ones that I collected back from my brother, so they’ve been in the family since 1975 or thereabouts, if true.  The ME6 catalog number was a strip of three hobbits, as can be seen on the Lost Minis Wiki.  These guys are one strip, plus a spare spearman presumably representing a lost second strip.  They stand about 16mm tall from the base of the foot to the top of their hairy heads, and therefore are a rather small canvas upon which to work.  The MEs were sculpted in the traditional Minifig manner, prior to the invention of the greenstuff/epoxy sculpting pioneered by Tom Meier (if memory servies correctly), and there was a whole lot of detail with which to work.  The faces, in particular, are quite rudimentary.
When it came to basing them, I decided that I didn’t want to base them individually.  My brother and I have several times run the 1975 Lord of the Rings strategic tabletop game Ringbearer at conventions, and that calls for the Fellowship of the Ring to be pared down to 2 hobbit bases, the Ranger, the Elf, the Dwarf, and the Gray Wizard.  I have been gradually working toward the ability to run Ringbearer alone, and to do the whole thing with Minifigs, so I decided that i would make these guys my 2 hobbit bases, by mounting them in pairs on 25mm circular bases.
I checked my unpainted cache yesterday as well, and found that I have three more strips of these, plus three strips of ME48, the better-armed hobbit militia strip.  If I mount them all in pairs, I will only need to find one more strip to be able to field 2 Dragon Rampant units of hobbit militia.  That’s not enough to reproduce the Battle of Bywater (from “The Scouring of the Shire” in The Return of the King), but would add something unusual to a larger army of allied Free Peoples.