This past week I painted two of the “Giant Frog” pairs that came in the Bones 4 Dreadmere Expansion.  The Expansion comes with one of each pose, but I picked up a second pair of these so had 4 to paint.
The first thing I did was Google “colorful frog” to see if there were any unusual frogs found in nature I could copy.  I didn’t want to necessarily go the Poison Dart Frog route, even though they tend to be very colorful, as I felt these models looked to beefy and Bullfrog like, rather than the more slender nature of the Poison Dart variety.
What I found that I liked were blue frogs.  These are normal green frogs, that are missing some yellow pigmentation due to a mutation, causing their skin to appear blue.  I thought this would be a fun and easy to paint. 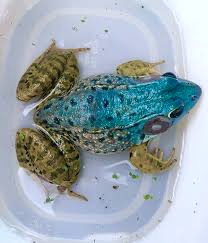 I prepped the figures in the usual way, soaking them in a dish of water with a couple drops of dish-soap added, then giving them a light scrub with a soft toothbrush, and then rinsing and drying them.  I then glued them all to 1.25″ fender washers using Aleene’s Tack y Glue.  When the glue was dry, I glued each like set of two to a tongue depressor with a couple drops of Elmers glue. 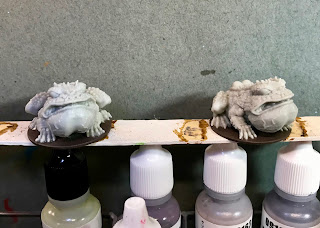 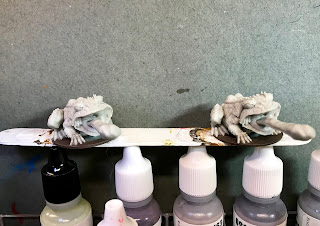 I thought I’d do these guys with Citadel Contrast paint to help keep things simple, and it seemed like an easy way to blend the colors from the blue to green to the white under belly.   So, I began by giving all of them a complete coat of Ceramcoat “White”.  When that was dry, I gave their lower halves a coat of Citadel Contrast “Apothecary White”.  When dry, I drybrushed the lower halves with Americana “Snow White”. 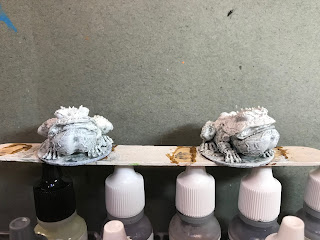 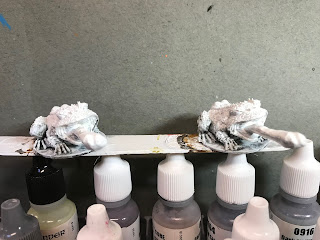 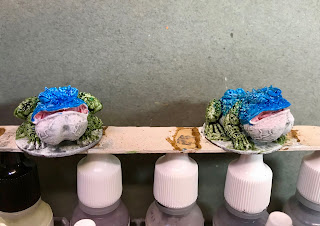 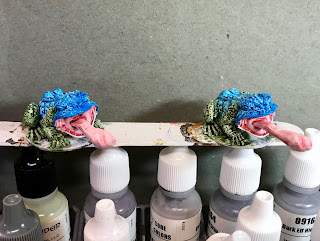 I drybrushed their backs a little with a mix of some Crafter’s Acrylic “Tropical Blue” and the “Snow White”.  I then painted their eyes with a mix of Americana “Antique Gold” and Folk Art Color Shift “Green Flash”.  When dry, I painted an outer pupil with Apple Barrel “Lemon Chiffon”, and the inner pupil with Ceramcoat “Black.  Lastly, I painted the bases with the “Mississippi Mud”. 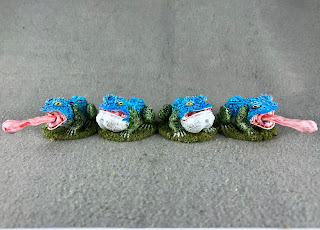 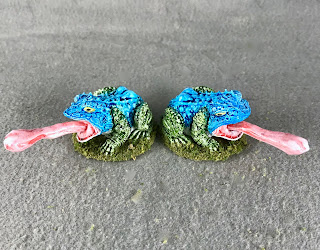 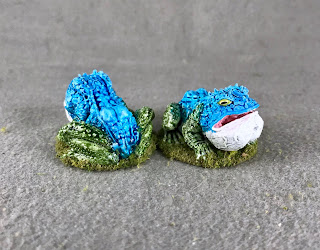 For just some fast and simple monsters, I think they look okay; and using the Contrast paint helped get them done quickly and with a reasonable appearance of shading .