This past week I began work on the small “XAIRobot”  from the Bones 4 Chronoscope Expansion.  Like many others, the recent release of Stargrave , the new Sci-Fi rules from the author of Frostgrave, has me on a bit of a science fiction bend.  So, I felt it was time to do a little work on my Chronoscope Expansion.
The late finish of last week’s figure, and some weekend travel, once again leaves me with a work-in-progress figure for today.
I prepped the figure in the usual way, soaking it in a dish of water with a couple drops of dish-soap added, then giving it a light scrub with a soft toothbrush, and then rinsing and drying it.  I then trimmed the figure’s integral base a little, and glued the figure to a 7/8″ metal washer with some Aleene’s Tacky glue.  I then placed the figure in my painting grip. 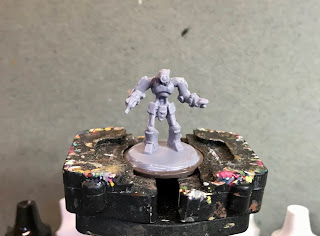 I bean by painting the figure entirely with Ceramcoat “White”.  When dry, I gave the figure a complete coat of Citadel Contrast “Apothecary White”. 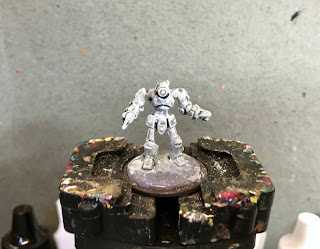 When the Contrast paint was dry, I drybrushed the figure with some Americana “Snow White”.  I then painted some of the plates on the robot with Crafter’s Acrylic “Pure Pumpkin”.  After that I picked out some of the details with Reaper MSP “Holly Berry”, and then painted the central “eye” sensor with Citadel Contrast “Talassar Blue”. 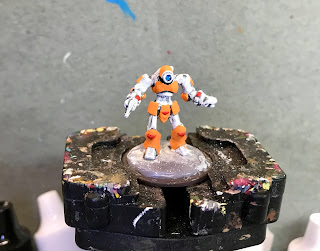 And that’s as far as I’ve progressed.  Hopefully, I’ll have this wrapped up by Thursday.   See you then!