This past week I painted the “Malvernis Soldier” from the Bones 4 Chronoscope Expansion.  I’m not very familiar with the particularities of the CAV factions, and just  plan to use this fellow as a random crewman in Stargrave, so did not attempt to follow any official color scheme that there may be for  Malvernis soldiers.
I prepped the figure in the usual way, soaking it in a dish of water with a couple drops of dish-soap added, then giving it a light scrub with a soft toothbrush, and then rinsing and drying it.  I then trimmed the figure’s integral base a little, and glued the figure to a 1″ brown-primed metal washer with some Aleene’s Tacky glue.  I then placed the figure in my painting grip. 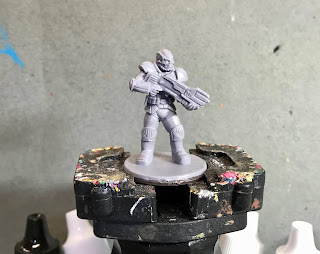 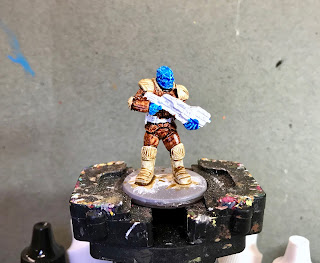 I meant to take a photo at this point, but forgot and continued painting without realizing it.  So my apologies for lack of step by step shots on this one.
I then highlighted the unit on his back using Crafter’s Acyrlic “Storm Cloud Grey”, and then Americana “Grey Sky”.  Next, I highlighted the belt with Ceramcoat “Denim Blue”, and highlighted the gun with Crafter’s Acrylic “Cool Blue”.   There is a small circular area on one of the objects on his utility belt, and I painted that with Crafter’s Acrylic “Wild Green”, and then I painted his belt buckle with Folk Art Metallic “Gunmetal Grey”.    Lastly, I painted the base with Americana “Neutral Grey”.
I let the figure and base dry overnight and the next day I gave them both a coat of Americana “DuraClear Matte” varnish.   Another overnight dry, and I sprayed the figure with Testor’s “Dullcote”. 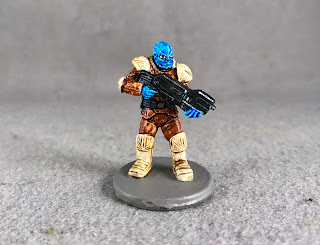 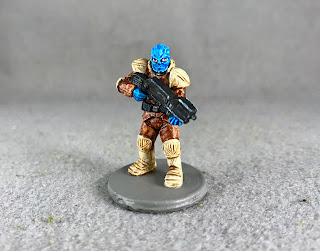 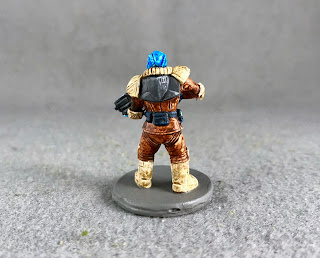 I’m happy with how this fellow turned out.  It’s not great as a display piece, (I feel the Contrast paint comes out a bit too splotchy), but certainly good for the quick game table figure.