This past week I painted the two Pirate Shrines, Maersuluth and Meriwyn,  from the Bones 5 Brinewind Expansion.
I prepped them in the usual way, soaking them in a dish of water with a couple drops of dish-soap added, then gave them a light scrub with a soft toothbrush, and then rinsed and dried them.  I then glued the Maersuluth figure to a 1.5″ black-primed metal washer, and Meriwyn to a 1.25″ black-primed washer, both with some Aleene’s Tacky glue.  I then placed the figures on pill bottles with some blue-tac. 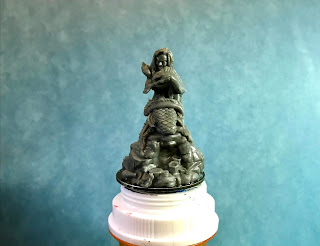 I began by painting the rocky base with Americana “Charcoal Grey”.  When dry, I gave it a coat of Citadel “Nuln Oil” wash.  When the wash was dry, I drybrushed the rocks with some Americana “Zinc”, and then Americana “Grey Sky” 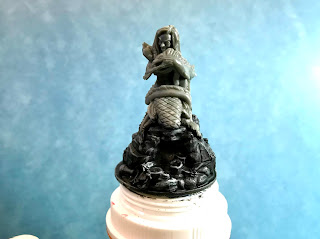 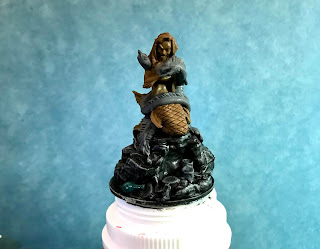 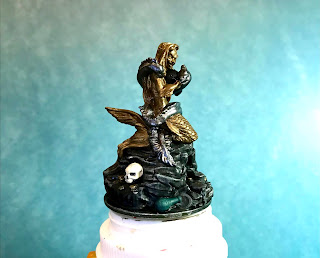 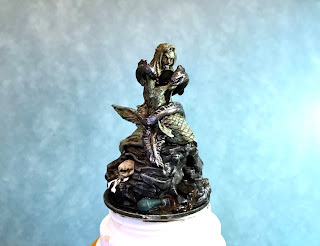 When the wash was dry, I lightly drybrushed the mermaid with some Ceramcoat “Metallic Bronze”.  I then applied a coat of Citadel “Nuln Oil” wash to the eels, coins, cups, plates, shackles, bottle, and flag.  When the wash was dry, I drybrushed the eels with some Nicole’s “Metallic Silver”, and then highlighted the silver coins with Ceramcoat “Metallic Silver”, and the gold coins with Folk Art Metallic “Pure Gold”.  For the cups and plates I used Reaper MSP “Pewter” to do the highlights. 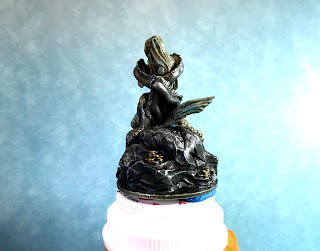 Next, I worked on the shackles, dabbing them with some Americana “Charcoal Grey”, and then a little Accent “Golden Oxide”, to give them a rusty appearance.  Next I worked on highlighting the bottle, using Americana “Forest Green”, and Americana “Festive Green”, and finally blending in a tiny bit of Americana “Snow White”. I then did the highlights on the skull using the base “Graveyard Bone”, and then highlighted the flag with Ceramcoat “Denim Blue for the black parts, and the “Bleached Linen for the skull & crossbones design. Lastly, I painted the pearl with Folk Art Dragonfly Glaze “Violet-Blue-Green Shift”.  As I looked at the final results, I felt the figure needed a last pop of color, so I decided to attempt to paint the eyes on the eels like rubies.  I had had the thought of doing this throughout the entire paint job, but always worried about getting the gem look right in such a small area.  I finally convinced myself to give it a try.  So with a little Reaper MSP “Blood Red”, mixed with a little of the “Snow White”, I gave it a shot.  Lastly, I painted the base with Folk Art “Teddy Bear Brown”.

Next, I moved on to the Meriwyn Shrine.  Where I had done the first shrine as metal, I decided to do this one as stone.  Mainly because Reaper decided to sculpt it with a broken and missing left arm, and I find it easier to believe that a stone statue had an arm crack off than a metal one would. 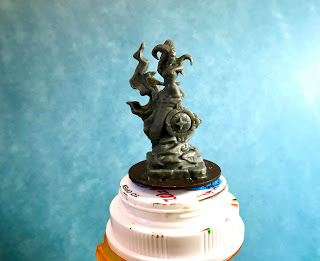 I began by painting the entire figure with Americana “Neutral Grey”.  When this was dry, I gave it a complete coat with the “Nuln Oil” wash. 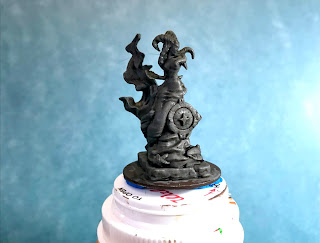 When the wash was dry,  I drybrushed the figure, first with Americana “Jade Green”, and then with Folk Art “Celadon Green”.   Like with the previous shrine, I finished up by painting the base with “Teddy Bear Brown”.

I let the figures dry overnight and the next day I gave them a coat of Americana “DuraClear Matte” varnish. When dry, I used some white glue to glue some sand to each figure’s base.  Another overnight dry, and I sprayed the figures with Testor’s Dullcote”.    When the “Dullcote was dry, I went back and painted the pearl, bottle, and eel eyes with Americana “DuraClear Gloss” varnish. 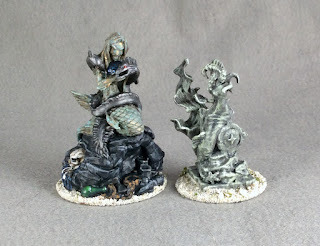 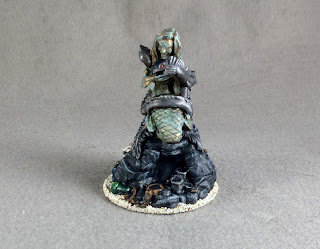 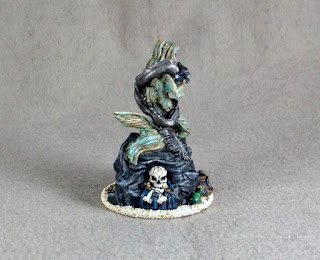 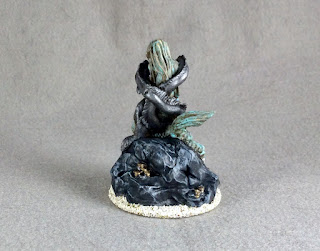 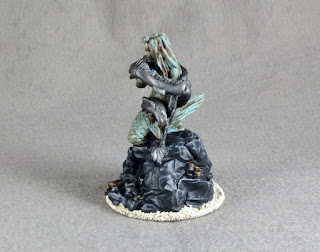 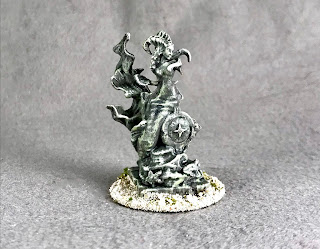 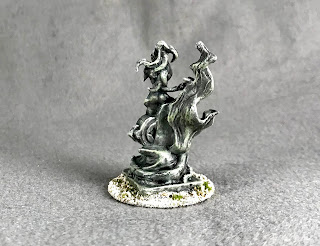 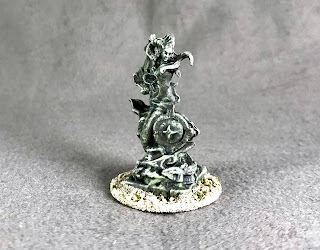 I’m really pleased with how these two pieces turned out!  They make from some really great scatter terrain.