This past week I painted a pair of the “Stained Glass Knights” from the Bones 5 Core Set.  The Core came with one of these figures, and I thought it was such a fun figure I ordered an extra Constructs set to get a second one.
I prepped the figures in the usual way, soaking them in a dish of water with a couple drops of dish-soap added, then giving them a light scrub with a soft toothbrush, and then rinsing and drying them.  I then glued the figures to 1″ green-primed metal washers with some Aleene’s Tacky glue.  I then glued the figures to a tongue depressor with a couple drops of white glue each. 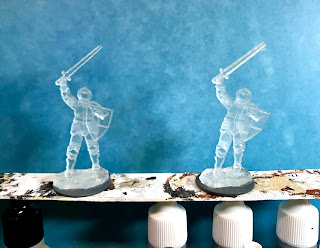 To begin, I gave both figures complete coats of Americana “DuraClear Matte” varnish.  When this coat was dry, I picked out some details on the armor and painted them with Citadel Contrast “Snakebite Leather”, front and back.  I then painted the rest of the armor with Citadel Contrast “Space Wolves Grey”, both front and back.  With the arms behind the shields, I just painted the backs since the fronts were covered by the shields. 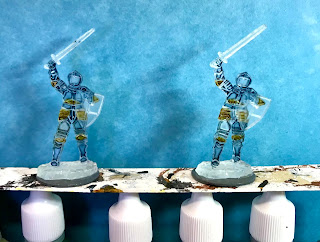 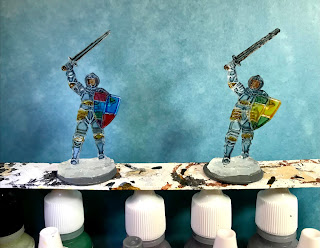 I then painted all the lines between the panes with Ceramcoat “Black”.  When dry, I went over them again using Accent “Princely Pewter”.   After that, I painted the bases with Americana “Neutral Grey”, and when dry, gave them a drybrush with Folk Art “Platinum Grey”. 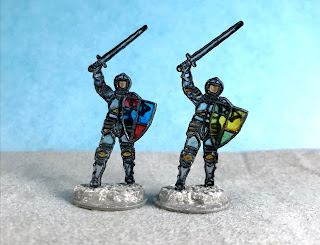 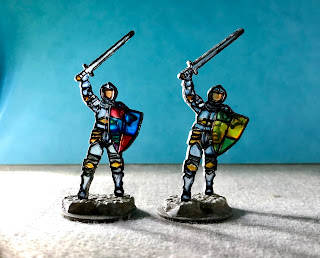 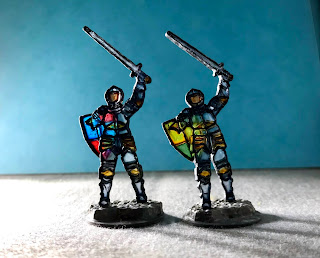 I’m really pleased with how these turned out, and am impressed with how the Contrast paint works on these translucent/clear minis.  I’m looking forward to experimenting with some of the other translucent figures from Bones 5.