This past week I painted the “Anchor of Damnation” from the Bones 5 Brinewind Expansion.
I prepped it in the usual way, soaking it in a dish of water with a couple drops of dish-soap added, then gave it a light scrub with a soft toothbrush, and then rinsed and dried it.  I then glued the figure to a pair of 1.25″ brown-primed metal washers with some Aleene’s Tacky glue.  I then glued the figure to a pill bottles with a couple drops of white glue. 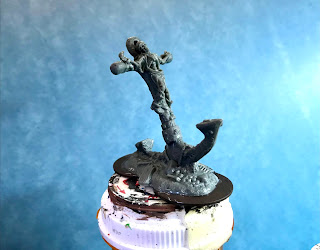 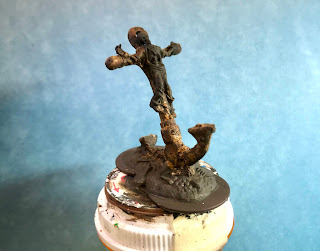 I did a few lighter anchor dabs with Reaper MSP “Lantern Yellow”, and then turned to the skeletons.  I began by painting the all bones with Reaper MSP “Graveyard Bone”.  I then painted the anchor skeleton’s boots with Ceramcoat “Charcoal”, and the pants with Folk Art “Cloudy Day” 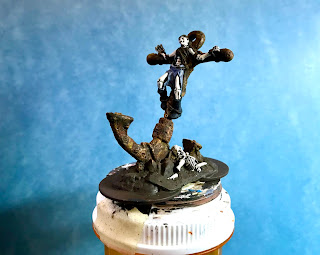 Next, I painted the shirt with Folk Art “Porcelain White”, and the  head scarf with Pathfinder MSP Urgathea Red”. After that, I painted The rocks with Folk Art “Dapple Grey”, and then the straps holding the skeleton on the anchor with Americana “Asphaltum”. 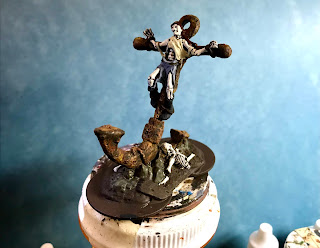 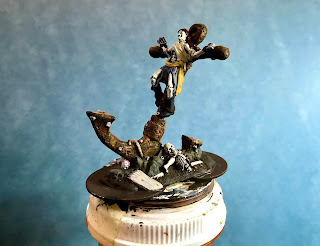 I let everything dry for a while and then gave the entire thing a coat of Citadel “Agrax Earthshade” wash.  When the wash was dry, I did some highlighting on the anchor with Americana “Sable Brown”, and some of the “LanternYellow”.  I then highlighted the barnacles with the base “Gray Green”.  Next, I highlighted the skeletons with Reaper MSP “Graveyard Bone”, and then some Crater’s Acrylic “Light Antique White”. 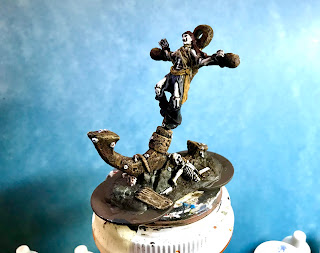 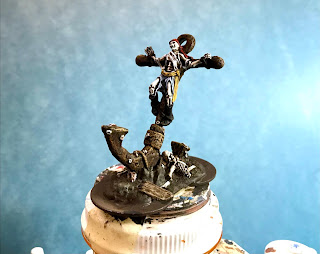 I let the figure dry overnight and the next day I gave it a coat of Americana “DuraClear Matte” varnish. When dry, I used some white glue to glue some sand to the figure’s base. I also added a mini seashell for decoration. Another overnight dry, and I sprayed the figures with Testor’s Dullcote”. 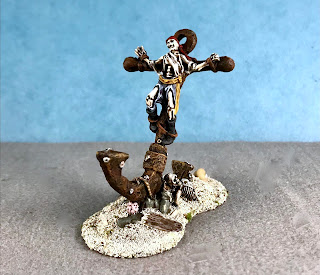 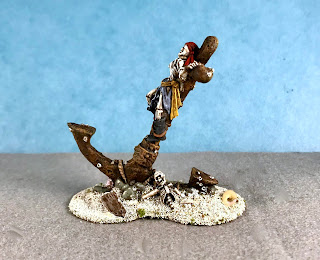 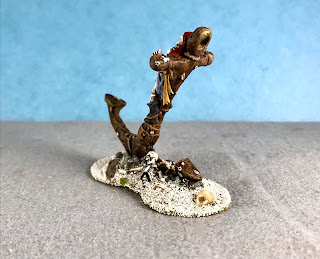 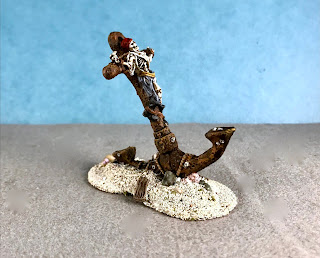 I’m really pleased with how this piece turned out.  It will add a lot of character as scatter terrain in either a jungle, seaside, or underwater setting.  And players can always wonder if the skeletons are really “just” scenery or not… 🙂

In other news, I decided to start working on the “Townsfolk” Add-On set a couple at a time on the side.  Often when I squeeze out dropper-bottle paint, like Reaper’s, I have some left over and my plan is to take a moment and use up this extra on these side figures; thus finishing more of my Bones, and not wasting as much paint.  I’ll just post photos when I complete a pair, but not bother with doing step by step articles for these since they are such simple figures. 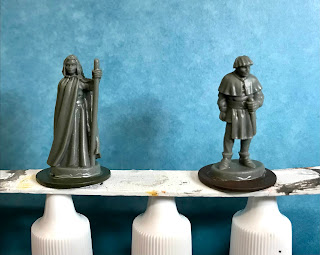