This past week I painted the “Ghost of the Dwarf King Durman the Mad”, and two of the “Everliving Flame” pieces, from the Bones 5 The Dwarf King’s Crypt Encounter set.  The set only comes with one of the Everliving Flame terrain pieces, but I ordered two of the Encounters as I wanted pairs of a number of the set’s scenery items, as well as a bunch of the Dwarf Zombies that came with it.
As you can tell from my past entries, I’ve really had a lot of fun experimenting with all the translucent figures that came in this Kickstarter.  This gave me an excuse to start working on the excellent Dwarf Kings Crypt set.  I was interested to see what I could do with the King’s ghost which had been cast in blue.
I prepped the figures in the usual way, soaking them in a dish of water with a couple drops of dish-soap added, then giving them a light scrub with a soft toothbrush, and then rinsing and drying them.  I then glued the Dwarf King and the Flames to 1″ primed metal washers, using Aleene’s Tacky for the King, and some Gorilla Super Glue Gel glue for the Flames.  I then put the King into my painting grip, and glued the Flames to a tongue depressor with a couple drops of Elmer’s School Glue. 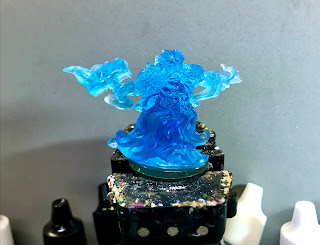 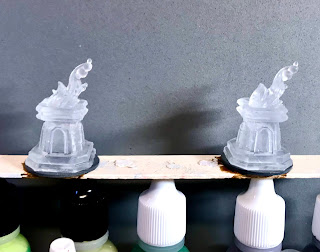 I started with the King, and began by painting the entire figure completely with Americana “DuraClear Matte” varnish.  Then, when the varnish was dry, I painted the figure completely again using thinned Citadel Contrast “Ultramarine Blue” to help provide some shadows in the recesses. 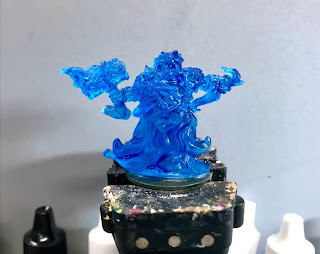 When the “Ultramarine Blue was dry, I drybrushed the body with, first Citadel Dry “Hellion Green”, and then Folk Art “Celadon Green”, careful to avoid the weapon and the wisps coming from his left hand.  I then drybrushed the weapon, and the wisps in his left hand, using Crafter’s Acrylic “Daffodil Yellow”, and then Apple Barrel “Lemon Chiffon”.  After that, I painted his eyes with Tamiya Color “Clear Red”.  When dry, I added pupils with Reaper MSP “Holly Berry”, and highlight dots with the “Lemon Chiffon”.  Lastly, I painted his open mouth with Contrast “Black Templar”. 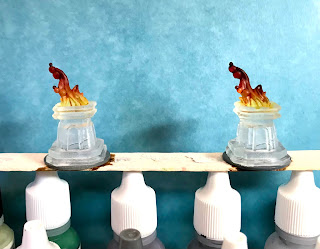 I was really pleased with the flames until I painted the bases with Ceramcoat “Charcoal”. Making the bases dark and opaque cut off a lot of the light that had helped brighten the translucent flames. 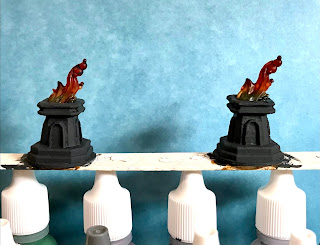 So, I decided I would need to paint the bases of the flames with regular acrylic paint to brighten them, and blend it with the more translucent Contrast paint as it went up.  So, I painted some areas with Reaper MSP “Hearth Glow, and then added some Crafter’s Acrylic “Daffodil Yellow”, and a little Apple Barrel “Lemon Chiffon”.  I then added some dots of the “Lemon Chiffon” near the top to try and look like floating sparks. I then put a little of the “Black Templar” around the base of the flame to blend the bottom with the base of the braziers. 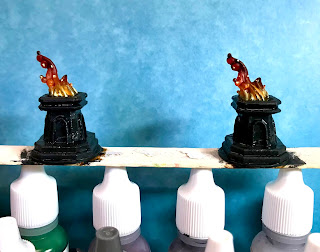 I then worked on highlighting the braziers, drybrushing with, first, Americana “Zinc”, then, Crafter’s Acrylic “Storm Cloud Grey”, and then a bit of Americana “Grey Sky”.   After that, I tried to do a bit of an OSL (object source lighting) effect by drybrushing the tops of the braziers, as well as the bottom where the flames leaned over the edge, with Crafter’s Acrylic “Pure Pumpkin”, Crafter’s Acrylic “Bright Yellow”, and the “Daffodil Yellow”. I lastly used a bit of Reaper MSP “Holly Berry”
When everything was dry, I used some white glue to glue some sand onto the base of the Dwarf King.  When this was dry I  painted it with the “Black Templar”.  When that was dry,  I drybrushed the edges of the base with some of the Crafter’s Acrylic “Tropical Blue”, and then I blended in some Crafter’s Acrylic “Cool Blue” closer to the figure, to again try a little OSL effect to make it look like the ghost was glowing.
I let all the figures dry overnight and the next day I gave them a coat of Americana “DuraClear Matte” varnish. 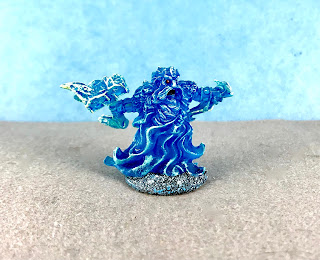 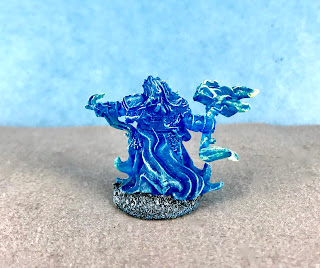 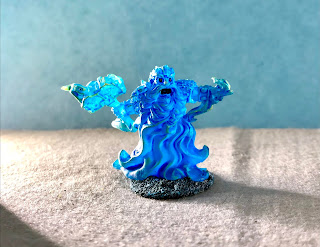 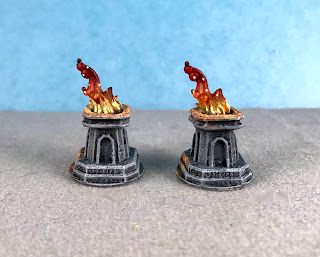 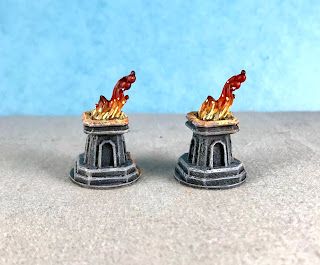 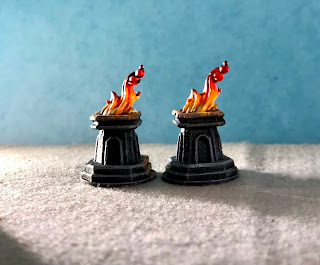 I’m generally pleased with these figures.  I think the translucence helps give them a unique look.  The OSL I feel is not my best, but works okay.  I probably should have spent more time with it, but was eager to get these figures finished up.