This past week I painted two of the “Zombie Dwarf Thane #3” figures from the Bones 5 The Dwarf King’s Crypt Encounter set.  The set only comes with one of these figures, but I ordered two of the Encounters as I wanted pairs of a number of the set’s scenery items, as well as a bunch of these Dwarf Zombies.
This gave me 6 of the Zombies. So to help them look more like a mixed group, I decided to paint each pair of identical figures differently, to give the pairs more of a differing appearance.
I prepped the figures in the usual way, soaking them in a dish of water with a couple drops of dish-soap added, then giving them a light scrub with a soft toothbrush, and then rinsing and drying them.  I then glued them to 1″ primed metal washers, using Aleene’s Tacky Glue.  I glued the washers to a tongue depressor with a couple drops of Elmer’s School Glue. 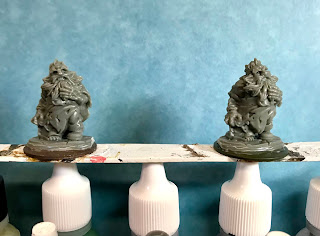 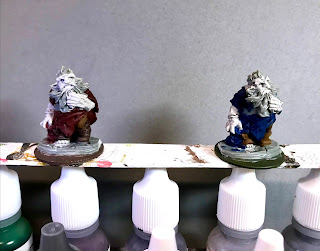 Next, I painted both their belts with Reaper MSP HD “Umber Brown”. I then painted the left zombie’s beard with Americana Neutral Grey, and the right Zombie’s beard with Americana “Terra Cotta”.  While I had the “Terra Cotta” out, I used it to paint the bracelets and belt buckle on the righthand one as well, then went back and used the “Umber Brown” to paint the bracelets on the lefthand one. After that, I used  Americana “Antique Gold” to paint their teeth, then used Apple Barrel “Apple Maroon” to paint the open wounds.  I also used this color to paint a little gore on their beards and hands. 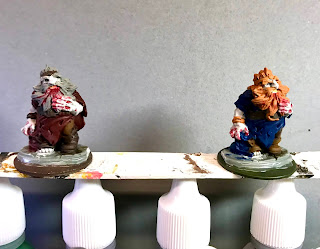 Next, I painted their bracelets and belt buckles with Folk Art Brushed Metal “Brushed Bronze”.  I then decided to do a pattern on one of their robes to give some more interest and differentiation, so I used some of the “Antique Gold” and did a quick pattern along the cuffs of the righthand one.  I let everything dry for a while, and then gave both figures a complete coat of Citadel “Agrax Earthshade” wash. When the wash was dry, I painted their one open eye with Apple Barrel “Lemon Chiffon”. 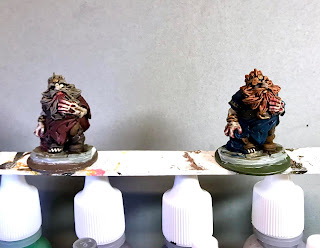 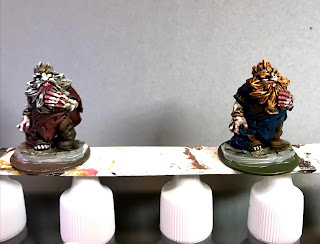 When everything was dry, I used some white glue to glue some sand onto the bases.  When this was dry I  painted it with Citadel Contrast “Black Templar”.  When that was dry,  I drybrushed the sand with Folk Art “Rock Grey”, and then a bit of Folk Art “Porcelain White”. 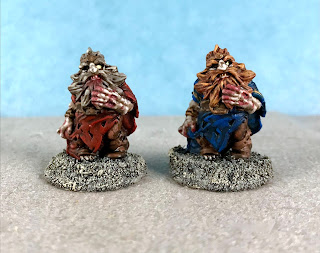 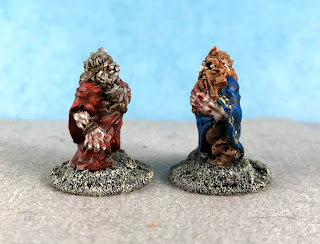 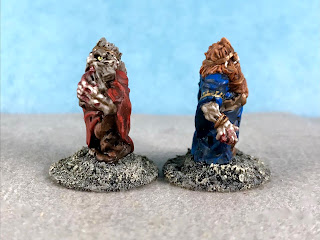 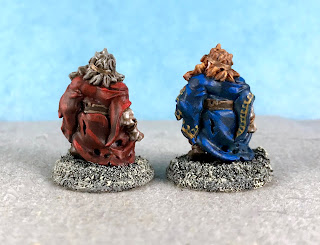 I was a bit disappointed that the basic pose on these.  It is really simple from a sculpting standpoint, with everything molded close to the body.  They lack any dynamic “Zombie-ness”.  To be fair, the detail itself is very good though.   They were fun to paint and despite the static nature came out looking rather good I think.