This past week I painted two more of the “Zombie Dwarf Thane” figures from the Bones 5 The Dwarf King’s Crypt Encounter set; this time “Zombie Dwarf Thane #1”.  Last week, I painted a pair of “Zombie Dwarf Thane #3”.  As mentioned in my last post, the set only comes with one of each of these figures, but I ordered two of the Encounters as I wanted pairs of a number of the set’s scenery items, as well as a bunch of these Dwarf Zombies.
This gave me 6 of the Zombies. So to help them look more like a mixed group, I decided to paint each pair of identical figures differently, to give the pairs more of a differing appearance.   Also, while the Thane #3 figure I did last week had no easily convertible limbs; this one, Thane #1,  as well as Thane #2, each had a raised right arm that I could easily chop.  So I was able to simply swap the right hand on one of the #1’s for the right hand off of one of the #2’s.  This helped give each pair a slightly different appearance.
I prepped the figures in the usual way, soaking them in a dish of water with a couple drops of dish-soap added, then giving them a light scrub with a soft toothbrush, and then rinsing and drying them. At this point I did the hand swap, and also trimmed the circlet crown off of the one on the left.  I then glued them to 1″ primed metal washers, using Aleene’s Tacky Glue.  I glued the washers to a tongue depressor with a couple drops of Elmer’s School Glue. 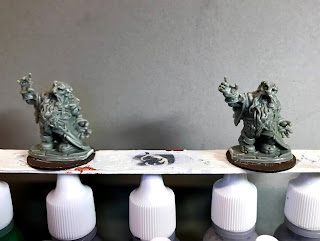 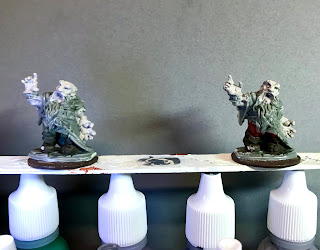 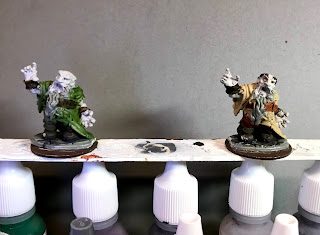 I then painted the beard on the lefthand one with Americana “Asphaltum”, and the beard on the righthand one with Reaper MSP “Black Noir”. After that, I painted their teeth with Americana “Antique White”, and then splotched Apple Barrel “Apple Maroon” on their hands and the mouth and beard of the lefthand one. Next, I painted the bracelets and the circlet on the righthand Thane, doing some with Folk Art Brushed Metal “Brushed Bronze”, or Reaper MSP “Scorched Metal”.    I let everything dry for a while, and then gave both figures complete coats of Citadel “Agrax Earthshade wash. 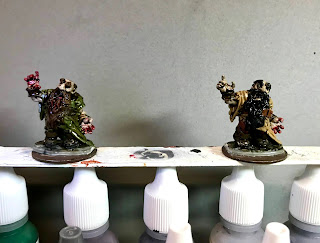 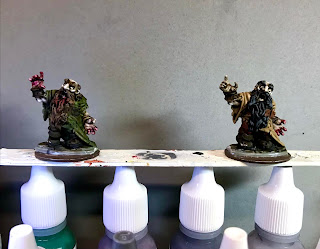 I let the Thanes dry overnight and the next day I gave them a coat of Americana “DuraClear Matte” varnish.  Then when the varnish was dry, I used some white glue to glue some sand onto the bases.  When this was dry I  painted it with Citadel Contrast “Black Templar”.  When that was dry,  I drybrushed the sand with Folk Art “Rock Grey”, and then a bit of Folk Art “Porcelain White”.  Another overnight dry, and I sprayed the figures with Testor’s Dullcote”. 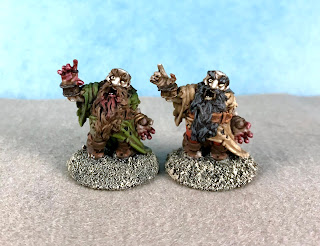 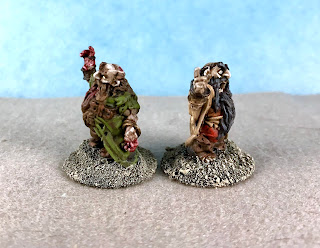 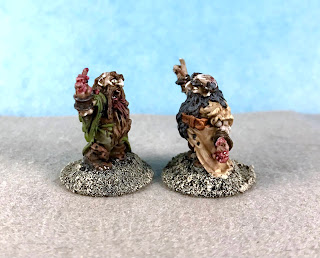 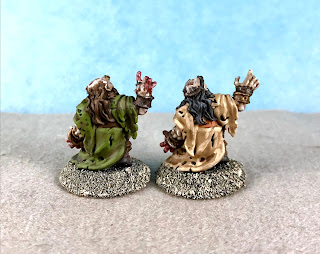 I’m really happy with these two.  I can’t wait to see the whole group of 6 together!