I didn’t get to finish painting any figures this week, as Real Life intervened.  But, I was able to work on a simple conversion figure over the weekend.
As I’ve mentioned in my previous two posts, I purchased a pair of the Bones 5 The Dwarf King’s Crypt Encounter set as I wanted pairs of a number of the set’s scenery items, as well as a bunch of the Dwarf Zombies and Dwarf Fighters.
One of the scenery items I was most looking forward to having a pair of, was the tomb; as I wanted to convert one to be the tombs to be for a Dwarf Queen, to go along with the Dwarf King’s tomb.
First thing I would need was a suitable Bones Female Dwarf figure to use as the tomb cover’s carving; as I did not trust my ability to sculpt one from scratch.   I was not sure what figure to use, as so many of the ones I had, or looked at in the online store, were posed somewhat dynamically.  Then, as fate would have it, I came across one of the Gwyddis, Dwarf Valkyrie figures, and realized it was perfect.  Her pose is terribly static and two-dimensional, but it was perfect for what I needed.
First thing I did was cut the Dwarf King off of the tomb cover.  Bones Black is a very hard substance to cut, unlike Original Bones; so in order to do this, I let the tomb cover sit in a pot of boiling water for 4 minutes to get soft.  I then quickly pulled it out and carefully sliced the King off of it.  Next, I worked on the Gwyddis figure, which, being Original Bones, didn’t need any pre-cutting treatment.  First I removed her backpack by twisting and pulling it off.  I then cut her base off, then her arms just below the shoulders.  After that, I carefully sliced down through the back of her head and skirt, trying my best to keep the blade straight and perpendicular to her orientation, so that she would lie flat on the tomb cover.  I then did a trial fit, and realized she was a little too tall to fit within the boundaries of the cover, so I carefully sliced a couple millimeters off the bottom of her skirt to make her shorter. 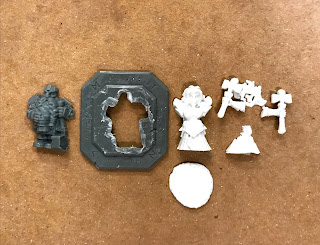 While I was working on the tomb cover, I also drilled through it and the tomb base to insert a couple rare earth magnets, to keep the lid in place when the tomb was being stored or transported.  I then superglued the magnets in place. 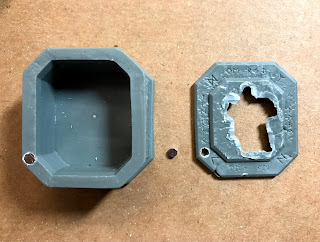 My next step was to superglue Gwyddis in place on the tomb cover. Once the glue was set, I worked on trimming and arranging her arms, and when I was satisfied, I glued them in place as well. 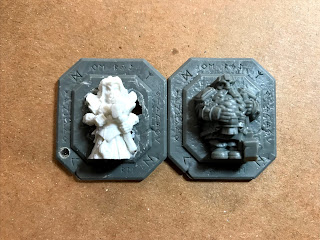 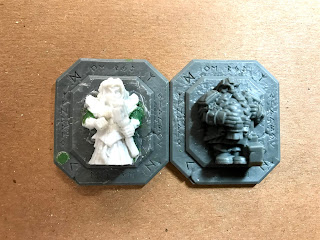 And here’s the finished result, with the King and Queen side-by-side.     I’m really pleased with how this turned out.  It’s not perfect, but when all painted up as weathered stone it should look just fine. 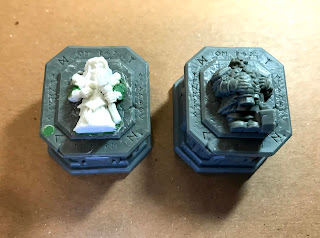 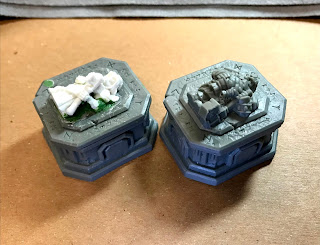 Hopefully next week we will be back to normal and I can complete the last two Dwarf Zombies from this set.  See you all then.