I’m afraid that I have always been a little ambivalent about the Christmas season.  I approve of the feasting and the getting together with families, but I’ve felt for years like the commercialization has gotten way, way out of hand.  Additionally, the expectations placed on people can become overwhelming.  One of the reasons I haven’t sung in a choir in a while was that music preparations got to the point where I wasn’t enjoying what was left of my time with my family.  Anyway, that Grinch-y preamble is just to explain why I suddenly had time on my hands this past weekend to do more painting, while my wife was singing, and I had cancelled other planned events due to a somewhat stronger than expect vaccine booster reaction…

After finishing the spearmen and miscellaneous goblins, I gave myself permission to play a bit, by finishing off a small group of vintage Minifig NS (Norman/Saxon) range figures originally produced in 1976.  They apparently weren’t in production all that long before being overtaken by the DA (Dark Ages) range within a year or two. 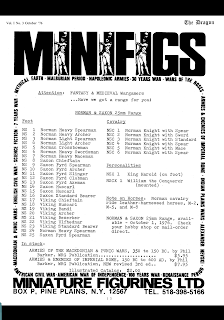 Given the look of the Mythical Earth figures, I would expect NS figures with round shields to make reasonable dismounted Rohirrim, rustic Gondorians, Laketown men, Sharkey’s thugs, Dunlendings, or even Easterners of various sorts. 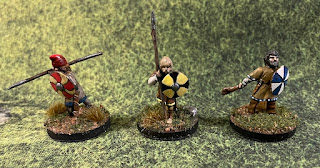 With that accomplished, I turned back to the dozen true orc archers, originally primed in January of 2020. I decided after I was done that “Past Rob” should probably have filed the mold lines on the tops of the figures’ heads a little more carefully, but past experience would indicate that it won’t really show much when a whole batlefield is laid out. 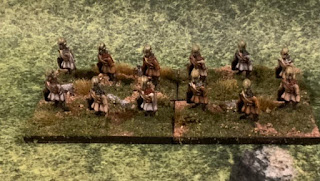 With that, I am left with a single primed unit ready to paint, a mixed group of Rohirrim lancers and archers.  I have to give some consideration to the question of what to set up next; getting a warband of Gondorians on the field (albeit with mounted Rohirrim support, perhaps) is the highest priority, so it probably won’t be man-orcs or wolf riders…