As mentioned recently, I have been considering the question of why some things are easier to find the inspiration to paint than others, and wondered if having the background map defined would help with inspiration.  While my recent painting has been for the (already well-defined) Middle Earth project, I noted that I had three larger 25mm fantasy armies, “fantasy Byzantines” (The Myzantine Empire, with a nod to Jack Scruby), “Easterners” (currently a mix of Ral Partha Moors and old Ral Partha Hyborian Age Turanians), and Orcs. So, I decided to take a stab at creating a map for them.  I started one once before, on a larger sheet of watercolor paper, but it got out of hand and remains stalled and stowed away somewhere. This time, I tried to keep it smaller and to the point. 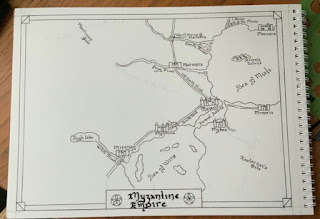 As with my Northlands campaign map, I used techniques from Jared Blando’s How to Draw Fantasy Maps, simplified to match my limited artistic skills (and to speed things up), starting with pencil work on cold press watercolor paper, and inking as I went.

Earlier this summer, I was experimenting wtih watercolor pencils.  I liked the way they worked,so that’s what I used on this.  I roughed in the colors. 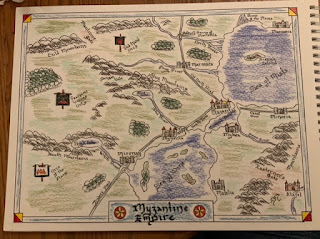 After a good night’s rest, I got out a #1 natural sable brush and worked my way from the upper right corner to the lower left corner with water, smoothing out the colors. Behind left handed, that kept my brush hand mostly away from the wet part of the page. 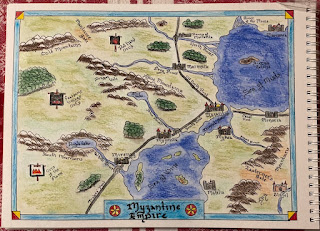 I haven’t entirely decided on campaign mechanics, so I left the map without a grid or area overlay.  I can add that electronically after scanning for use, or draw something in on a photocopy.  There is room at the edge of the map for not-Varangians to appear at the mouth of the River of the Plains, for horse (or lizard) nomads to appear north of the ruins of Marlantia, and for Westerners to appear up the Traders’ Road.  The Easterners are poised beyond the Easterner’s Gate, and three orc polities are spread across the western edge.  The overall situation is inspired by the Byzantine position in the late 11th century, just before the arrival of the 1st Crusade.
We’ll see whether that sparks any painting.
As far as January plans go, I just finished listening to and reading Rosemary Sutcliff’s The Lantern Bearers, so I am thinking it would be nice to paint some stands of figures to go with my Dux Bellorum project. Ross has been painting some French Revolutionary figures, and I wouldn’t mind getting back to adding some of those, too.  So, perhaps I will be pouring a New Year’s libation to Clio, Muse of History, rather than Calliope, Muse of Epic (fantasy), but I’ll be appropriately grateful if either of them deigns to grant some inspiration…