I showed off some of the material from my original D&D game back in April. While I had hoped to revive a D&D game this year, I ended up involved in a D&D 5th Edition game with a set of HAWKs players instead.  Nevertheless, I am still working toward actually doing this.

So, I took a few potential hobby projects with me, to fill any potential down-time during the family Christmas get-together.  Happily, there wasn’t a lot of that, but what time I did have I spent on drawing the Myzantine Empire map.

Since I was on a roll, I decided I would pull something off my D&D to-do list, and draw a more decorative map of the region in which the adventurers will be based. 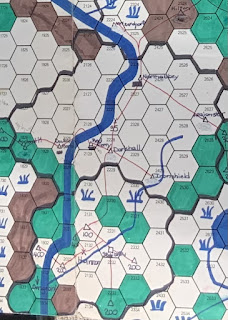 My original maps were drawn on SPI hex paper in the late 1970s, before I had done much reading in medieval demographics and agricultural history to get some sort of “realistic” grounding.  I ended up a little skewed (perhaps not inappropriate for a map which probably doesn’t owe much to surveyors), but attemtped to translate approximately the section above into a more fantasy style: 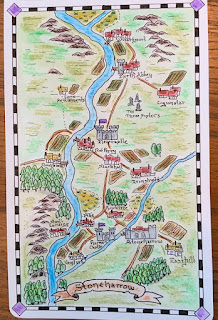 As with the Myzantine Empire, I added color with watercolor pencils, again deliberately keeping the colors somewhat less saturated.  I think this will do for a player handout … now I just need some players.