This past week I painted up a pair of the “Scale Armor Racks” from the Bones 5 Core Set Armory addition.  I had one from the Core Set, and one that I pledged for from the Core Set  break out Armory set.   Since I had just posted last week (due to Easter weekend putting me behind), I picked these simple figures to do. (And I barely managed that, finishing them only today!)
I prepped the figures in the usual way, soaking them in a dish of water with a couple drops of dish-soap added, then giving them a light scrub with a soft toothbrush, and then rinsing and drying them.  I then glued each of them to a 7/8″ grey-primed metal washer with some Aleene’s Tacky glue.  I then glued the figures to a large craft stick with a couple drops of Elmer’s glue. 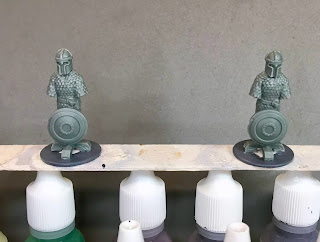 I began painting by giving all the scale armor and the helmets a coat of Ceramcoat “Black”.  When dry, I drybrushed it with Folk Art Metallic “Gunmetal Grey”.  I then went over it lightly with a drybrush of Reaper MSP “Polished Silver”. 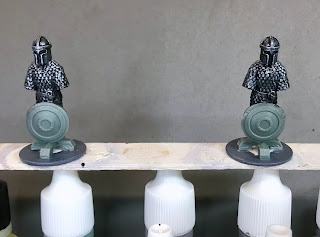 Next, I painted the wood rack bases with Crafter’s Acrylic “Cinnamon Brown”, and the belts with Accent “Real Umber”.  I let these dry, and then gave them a wash with Citadel Shade “Agrax Earthshade”.   When the wash was dry, I painted the back of the shields with Ceramcoat “Charcoal”. 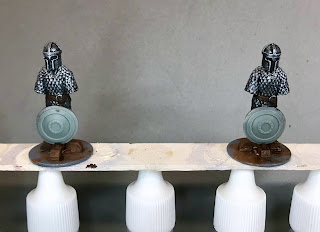 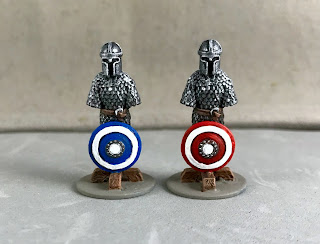 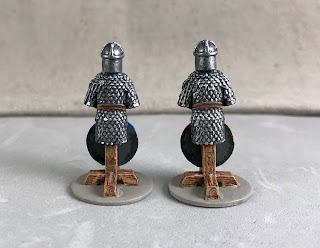 I’m generally pleased with how these turned out.  They’re not perfect, but as minor terrain pieces, I don’t think they have to be. 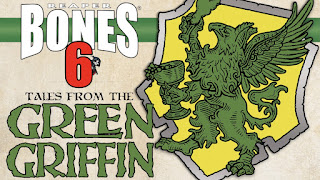 Bones 6 ended this past weekend.  Like others, I did not find this one to be as tempting as ones in the past.  I don’t know if it’s my overabundance of unpainted stuff from Bones 4 & 5, or the lack of a lot that interested me, but I went in at the beginning for a Core Set pledge and never raised it at all.   In the end, I don’t think I’ll even get the Core Set… there just wasn’t enough in it that I thought I would have a use for, since my gaming is primarily wargaming, not RPGs.   I think I will get the Lighthouse,  the Owlbear Legendary Tale Encounter, the Phoenix Egg Legendary Tale Encounter, and one or two Orc Add-ons.    Not sure what else.  Possible the Storm Goddess simply because she’s an exclusive.
So, what did you all pledge for, if anything?
Random thoughts:
1)  Interesting that Reaper is just going ahead and calling the bigger pieces “Exclusives”, after a series of big pieces from past Kickstarters that never actually made it to retail.
2)   Where were all the Encounter sets?  One of the big hits of Bones 5 was the Encounter sets.  These sets had a handful of figures and some cool terrain.   There were only 3 this time, and two of them came very late in the game.
3)  I’m not liking Reapers increasing tendency to produce cartoon-like figures.  So many of them have faces, and body proportions that look like they’re straight from a Disney or Pixar movie.  I really perfer more realistic stuff.  I’m not a fan.